Arsenal's Midfield And The Mistakes Against Norwich

Share All sharing options for: Arsenal's Midfield And The Mistakes Against Norwich

It's fair to say that Arsenal's midfield and defence were not at their best last Saturday. A variety of mistakes, including 5 or 6 on the concession of the 3rd Norwich goal, led to Arsenal dropping 2 points with just 5 minutes to go. The infuriating part of the performance was that, although Norwich played some excellent counter attacking football, all of their goals were entirely avoidable. A lack of defensive midfield nous had been apparent in Arsenal's home games since the injury to Mikel Arteta, with both Norwich and Wigan reaching double figures in shots attempted on goals. Alex Song played almost as a 3rd centre back against Stoke, and thus negated some of these problems, but, given his performance against Wigan and Norwich, Song's deployment as what was effectively a halfback was down to necessity, and not retained against Norwich City.

Norwich's set up against Arsenal was perfect to exploit this space, and space on the counter attack. Their 4-3-1-2 allowed them to leave 3 up front; Wesley Hoolahan, Grant Holt and Simeon Jackson, while enticing Arsenal's fullbacks to push on, giving space in behind the fullback, leading to numerous cutbacks from which Norwich could've scored.

Despite going 1-0 down, it was Norwich, not Arsenal, who seemed more composed in the early stages of the first half. They stroked the ball around fluently, and, by the time they equalised, they had already had one goal bound shot blocked on the line by a desperate Kieran Gibbs. Unlike then, when Sagna and Vermaelen had been pulled out of position, Arsenal's back 4 were in a strong position when Hoolahan equalised. It was the position of Song and Aaron Ramsey, in Arsenal's double pivot, that caused problems. Neither had tracked Hoolahan, the midfield runner, giving him at least 12 square yards of space in Arsenal's penalty area. The shot was savable, and it was an error from Szczesny, but it was a goal that had been coming. Ramsey's defensive nous is quite clearly lacking; he puts himself about well, but does so better from a higher position, being able to press with Robin van Persie, instead of being disciplined. Alex Song, too, this season, has lost some of the discipline that made him so crucial in the last two seasons, and one can see why Arsene Wenger wants to sign Yann M'Vila. Surely if M'Vila, or Arteta had been playing, Hoolahan wouldn't have had so much space.

Attacking forays from Thomas Vermaelen have been key to Arsenal's attack this season; his driving run took players away from Mikel Arteta as the Spaniard struck the opener in Arsenal's 4-0 victory against Wigan and he's scored key goals from the back by making late, unmarked runs into the box against Newcastle and Wigan. Thus, with Arsenal level against Norwich, Vermaelen made another run forward. Such runs forward aren't usually a problem; on most occasions, Alex Song will drop deeper and Mikel Arteta will stay back to intercept, or, Arteta will, on rare occasions, fill in for Vermaelen. Arsenal's defence is covered, and there's another goal threat; Vermaelen is the 3rd top scorer. On Saturday, though, Song didn't drop in for Vermaelen, despite Kieran Gibbs' protestations to do so. Instead, Song stayed forward, and, crucially, so did Aaron Ramsey. When Norwich played a long ball forward, Arsenal were suddenly outnumbered at the back; Kieran Gibbs and Laurent Koscielny were in a 2 v 3 against Hoolahan, Holt and Jackson, with Song and Ramsey behind the Norwich players. Neither midfielder made it back in time, with Ramsey notably jogging. Again, Hoolahan has lots of space, because Gibbs can't challenge; otherwise, he leaves Koscielny with 2 strikers. Hoolahan has lots of time to play the decisive ball behind Gibbs as Holt makes the diagonal run, and, although Gibbs gets back to block, the deflection strands Wojciech Szczesny. If Song had been back, he could've challenged Hoolahan, or forced him to lose the ball; with Song forward, neither could happen. Vermaelen receives some blame for going forward without checking if he was covered, but, with the tactic used so frequently, and with Gibbs asking Song to come back, Song gets most blame, with Ramsey receiving some for not getting back.

Not only did Song and Ramsey have poor games in tracking midfield runners, but they also had poor games in making regaining possession; they combined for 1 successful tackle and 2 interceptions. As a result, Koscielny and Vermaelen came out quite high up the pitch to make interceptions; when Vermaelen dangerously did this in the 85th minute, Arsenal were punished with conceding a goal. In the last full game he played, against Manchester City, Mikel Arteta made 5 interceptions, protecting the centre backs, Vermaelen in particular, but also protecting Gibbs when he went forward. Without someone with the defensive nous of Arteta, this didn't happen against Norwich. 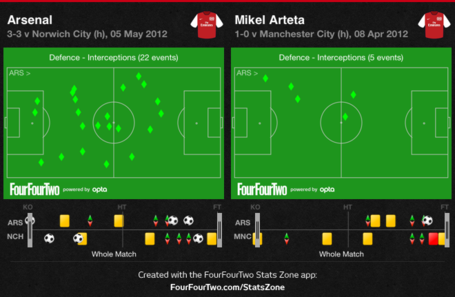 Arsene Wenger now has a very important decision ahead of Arsenal's trip to the Hawthorns; does he continue with the unsatisfactory double pivot of Aaron Ramsey and Alex Song, or does he do something different? Rosicky and Song worked fairly well when Arsenal pressed in the 2nd half, but with Wenger showing a preference to play Rosicky higher up the pitch, that is unlikely. More likely is playing Francis Coquelin with Song; Coquelin is a very proficient passer, and showed against Tottenham (and against Manchester United, where he was Arsenal's best player) that he can be a very disciplined holding player; he made 6 tackles, with all but 1 in his own half, and 3 interceptions in the midfield area. His discipline will allow Alex Song to get forward without leaving lots of space behind, which seems precisely the reason why Arsene Wenger is interested in signing Yann M'Vila; Alex Song is starting to leave too many gaps when he goes forward, perhaps necessitating a move to a more advanced positon.