Share All sharing options for: Stoke City Vs Arsenal: 3 Points

A 1-1 draw was probably a fair result, though after the first half performance from Arsenal, Arsene Wenger would've felt that his side perhaps deserved more. Arsenal's lineup was as expected, with Yossi Benayoun returning after being ineligible against Chelsea, giving Arsenal a more creative threat on the left side. On the right, Gervinho got the nod to replace the injured Theo Walcott. Stoke played in their traditional 4-4-2, though with two wingers; Jermaine Pennant made a rare on the right hand ahead of Ryan Shotton.

We've often discussed how Arsenal have a tendency to play to the right side this season, with 38% of their attacks going down the right side. Today, against Stoke City, Arsenal used the right, middle and left evenly; in fact, more play down the left hand side, 34%, with 33% of Arsenal's play going through the middle and right. Arsenal looked far more dangerous down the left side with Ryan Shotton having a poor game and Jermaine Pennant not tracking back as much. Kieran Gibbs played almost like a wing back, supporting Yossi Benayoun or Gervinho. Tomas Rosicky also preferred going down the left hand side. When Shotton came off, though, for Robert Huth, Arsenal's attack was somewhat blunted, and they were unable to get to the byline through dribbling. Perhaps, then, Alex Oxlade-Chamberlain should've come on instead of Andre Santos when Chamakh came on, to give Arsenal pace, directness and crossing ability. 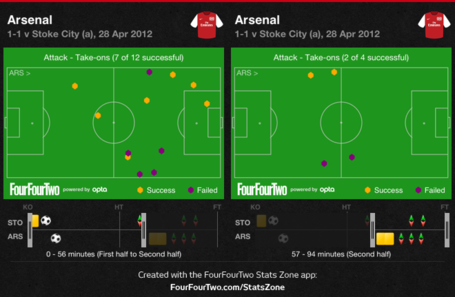 Still Arsenal have failed to win without Mikel Arteta. Since the influential Spaniard joined on the last day of the summer transfer window, Arsenal have lost 3 and drawn 2 of the games without him. In the first half, Arsenal were able to circumnavigate Stoke's pressing as the Potters dropped deeper after going ahead after 9 minutes. In that regard, that was better for Arsenal; Stoke's shape wasn't very compact, and there was space in between the lines. In the second half, Stoke pressed more, but remained compact. Their physicality forced Arsenal to play long, where Stoke won most of the aerial duels. Arsenal were unable to play from the back, with Sagna, Koscielny and Vermaelen all passing at lesser rate than usual. 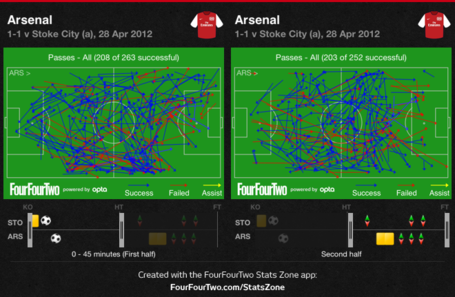 Robbie Mustoe made the comment last week during ESPN2's telecast of Arsenal-Chelsea that "[Arsenal] just miss that little bit of magic that Fabregas and Nasri gave them". While the contribution of Samir Nasri is very much debatable, there's no question that Arsenal have missed Cesc Fabregas. Tomas Rosicky has been superb in recent weeks, with his renaissance very much linked to Arsenal re-finding their identity. In the end, though, there's been a lack of assists from midfield; Ramsey has 4, Rosicky 3 and Arteta 2. Song has made a major contribution, but here, without Mikel Arteta, Song was more disciplined, usually dropping in alongside Koscielny and Vermaelen to help deal with the aerial bombardment. Thus, he was unable to get as forward as usual. In the second half, Rosicky faded, perhaps still affected by the illness that limited him to 60 minutes last weekend. He was less influential in the 2nd half as Arsenal's possession suffered somewhat, and Arsenal's creativity suffered. Rosicky's been excellent, but Arsenal still miss someone who can unlock a defence with a superb throughball, especially if Song isn't to get forward as much. Wenger thinks that it may be linked with belief, but it might also be linked with not having someone to provide through passes. In recent matches, Arsenal have been stunted against deep-lying teams, and they were again today. 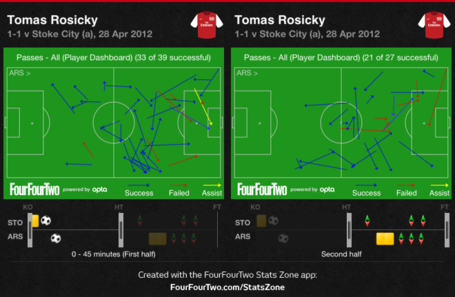 Arsenal, though, still have 3rd place in their hands. Win the next 2 fixtures, against Norwich and West Bromwich Albion, and they will be 3rd. If Tottenham lose one of their next two games, or draw both, Chelsea get 4 points or less from their next two matches and Newcastle drop points against Chelsea, Arsenal will be able to seal 3rd place with victory against Norwich. They're nearly over the line; now, they must see the job through.