Aaron Ramsey And The Left-Wing Conundrum

Share All sharing options for: Aaron Ramsey And The Left-Wing Conundrum

Away victories against Sunderland, Everton and Liverpool in the midst of Arsenal's recent 7 game win streak masked the fact that Arsenal have not played very well away from home since early December when they beat Wigan 4-0. Wins against Sunderland, Everton and Liverpool were no mean feat, and they did deserve to beat Sunderland, but the latter two were very lucky; Everton dominated proceedings in the 15 minutes before and after half time, while Liverpool missed several good chances. Arsenal's away record, of 7 wins, 2 draws and 7 losses will be cause for concern for Arsene Wenger, as will the fact that Arsenal simply haven't played well away from home. That is usually the result of opposing teams pressing Arsenal; either all the way, or in Arsenal's attacking half. Arsenal's players become ruffled and prone to mistakes as their passing game suffers, and it's no great surprise that both of QPR's goals were a result of errors from Thomas Vermaelen.

To counter that, Wenger has begun to deploy a more creative, possessive left winger; Yossi Benayoun played against Tottenham and Liverpool, two teams that were expected to cause Arsenal some problems, and Tomas Rosicky, wrongly as it took away Arsenal's wide advantage, played on the left against AC Milan. Aaron Ramsey started against Everton, and did well in an unnatural position. He made good diagonal runs into goal-scoring areas, reminiscent of Samir Nasri at his best last year, while keeping the ball well and giving Arsenal a 4th man in midfield. When Arsenal were pressed back by Everton, it was Rosicky and Ramsey who settled the game down in the closing minutes (though, it must be said, when Ramsey was playing well, Everton's pressing was relaxed). With Ramsey's energy, it must be tempting for Wenger to play him there and allow Kieran Gibbs to get forward. Yossi Benayoun can also do these things, while Gervinho and Oxlade-Chamberlain offer a more direct threat and the ability to get in behind. With QPR likely to press, though, and use their physical advantage over Arsenal, starting a more creative player made sense. And with Nedum Onouha likely to knock Yossi Benayoun off the ball, starting Ramsey wasn't a bad idea; the bigger problem was that after 35 minutes, it was clear it wasn't working.

The biggest problem with playing Ramsey on the left hand side was that his tendency to come inside disrupted Arsenal's shape. By coming inside, Arsenal had a loose 4-3-1-2 against QPR's 4-5-1/4-4-2, with one of Joey Barton or Jamie Mackie happy to track Kieran Gibbs and help Onouha. When QPR pressed, Ramsey was unable to offer an outlet wide on the left hand side, nor was his passing quick enough to help Arsenal play around the pressure, something that increasingly annoyed Mikel Arteta, who was desperately looking for forward options and movement. Furthermore, Ramsey and Tomas Rosicky were occupying each others' space, hindering Arsenal's ability to create. Perhaps Wenger intended for more movement between Rosicky and Ramsey, and perhaps he didn't expect Arsenal's shape to radically suffer. For most of the first half, Arsenal were sluggish and dulled, unable to create chances and unable to get a foothold because of QPR's aggressive closing down in their own half. The reason that Ramsey was played, to counteract QPR pressure, was counteracted itself by Ramsey's narrowness and slowness of passing. At half time, Wenger had 3 options to bring on instead of Ramsey; Benayoun would offer the creative play and energy while showing more positional discipline, while Gervinho would add a more direct threat in behind and an outlet ball. Alex Oxlade-Chamberlain has the ability to be a creative player, but also direct. All would give Arsenal better shape, and more options for an attack that had been largely through the middle. Instead, Wenger kept Ramsey on until his customary 65th minute substitution, a decision that, based on the first half performance and subsequent second half performance, was a mistake.

Arsenal's play was thus very narrow when they needed to stretch play. QPR were able to alternate between playing deeply and pressing, and Arsenal weren't able to move the ball quickly enough or wide enough to stretch QPR. Kieran Gibbs was left lacking support, much like Theo Walcott did when Bacary Sagna and Carl Jenkinson were out. The introduction of Gervinho for Ramsey after 68 minutes seemed to be a move that was made too late.

Arsenal's susceptibility to pressure away from home (at home they seem more comfortable playing around it) is a problem. Starting Aaron Ramsey, though, doesn't seem to be the solution, as he creates more problems and doesn't fully solve the pressing susceptibility problem. If Arsene Wenger is worried about Gervinho giving the ball away, Yossi Benayoun or Alex Oxlade-Chamberlain seem to be the best answer. They can keep the ball well, come inside if needed, or support Kieran Gibbs as he makes forward runs. Arsenal have 3 away games left, against Wolves, Stoke and West Bromwich Albion. If they want to finish 3rd, they'll have to play much better in those 3 games. 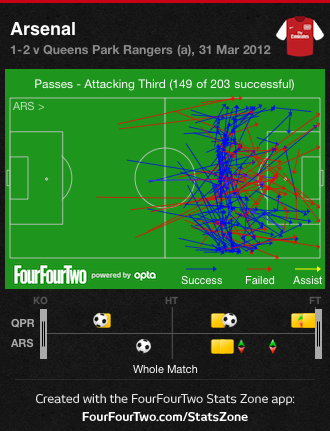 Because Aaron Ramsey didn't offer a threat in behind, Arsenal's passing in the final third was very narrow. They were unable to get in behind QPR from wide areas and create chances from those angles. 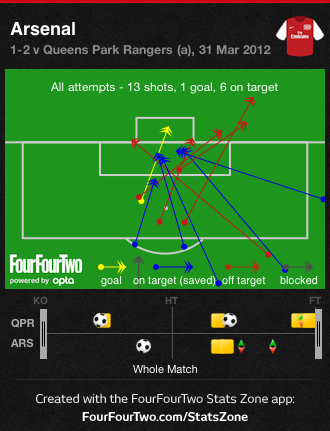 As a result, Arsenal were unable to create good chances, and had only 13 shots, below their average of 15 in away games. 8 of these shots were from long range, and, aside from Theo Walcott's goal, only Robin van Persie's chance caused Paddy Kenny any problems. 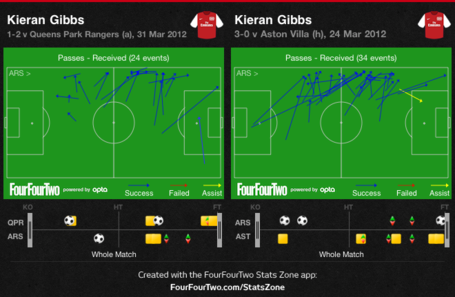 Finally, Kieran Gibbs' attacking play suffered as he lacked support from Ramsey, and was double marked.