Arsenal are finally finding their true identity, and it has resulted in a remarkable run of 6 wins in a row in the Premier League, 4 of which have seen Arsenal go behind. They also beat AC Milan 3-0 in this period, and although it wasn't enough to erase a terrible first leg, it showed that Arsenal not only have the quality but also the belief to finish in the Champions League places this season. The return of key players like Bacary Sagna and Kieran Gibbs has, of course, played a major role in Arsenal's revival. But so too has been pressing, and the way that Arsenal has attacked with pace. So much a team that was caught in between styles in October and November, Arsenal are slowly starting to return to the ‘old' Arsenal, with creativity and pressing.

After losses to Manchester United and Blackburn, Arsenal, a team shorn of confidence abandoned the pressing style that had seen them play the best football in the Premier League between December and March last season. With 4 new starters to integrate into the starting XI after a busy transfer period, the coordination required for pressing wasn't there and Arsenal looked to drop off and protect what they had. For a while, it worked, before the decimation of Arsenal's midfield and their fullbacks made it easy for teams to play through the midfield, and Arsenal's possession began to suffer, especially in defeats against Fulham, Swansea and Manchester United. In all 3 of those defeats, long periods of matches were dominated by the opposition, and Arsenal were unable to gain any foothold. The defeat against AC Milan was the culmination of being dominated; Arsenal were never in the match, and never pressed, giving Zlatan Ibrahimovic too much space and too much time to run the game for Milan. After defeats against Milan and Sunderland, Arsenal changed the way they defended off the ball, which was perhaps out of necessity. Needing to be positive against Tottenham, AC Milan and Newcastle, Arsenal played as they did in the previous two seasons, pressing, winning the ball back in the midfield and attacking with a high tempo. The introduction of Yossi Benayoun gave Arsenal balance, if not symmetry, buy playing deeper and more narrowly than Gervinho, allowing Theo Walcott to play higher and press more.

As Kieran Gibbs said to Arsenal.com, pressing allows Arsenal to control the game. By getting tight to opposition defenders and midfielders, Arsenal can win the ball back quickly and monopolise possession. By doing this, they also win the ball back in promising areas, as they did for their 5th goal against Tottenham. Mikel Arteta pressed Ledley King, forcing him to hopelessly lump the ball forward, where Alex Song collected in midfield. He then played the ball over the top for Theo Walcott to score, with King out of position and out of sync thanks to the quick way Arsenal had won the ball back. The biggest benefit from pressing, though, is defensively. By pressing, Arsenal constrict space and make it harder for opposing teams to play through them by restricting passing options. When passing options are available, an Arsenal player is usually quick to close that player down and win the ball back. This suits both Thomas Vermaelen and Laurent Koscielny, who's partnership has come on leaps and bounds since the rather disastrous performance in Milan. That partnership is more suited to a pressing game than one involving Per Mertesacker; although the German's positioning is superb, his pace isn't, and thus, it becomes harder to hold a high line with him. With Koscielny and Vermaelen, there's enough pace between the two to cover if they get caught out by long balls over the top; in fact, Koscielny is the second quickest Arsenal player over 40 metres; indeed, the back 4 that's best suited for a pressing game is Sagna, Koscielny, Vermaelen and Gibbs, who have won 7 of the 8 games they've played together, drawing the other one, and conceding just 4 goals.

Many will point to Arsenal's goals conceded record of 39 in 29 games as a reason why pressing doesn't work, and that Arsenal should get back to basic defending, and sign people like Chris Samba and Gary Cahill. That, though, ignores analysis of how Arsenal have conceded a majority of goals this season; often when they've played a high line without pressure, as they did in the travesty at Old Trafford and in the first half against Chelsea, as well as defeats against Blackburn and Swansea. We've often said how dangerous it is for Arsenal to play a high line without pressure; conversely, when Arsenal don't press, they can invite too much pressure, which happened against Fulham in January and threatened to happen Wednesday night against Everton. Ultimately, Arsene Wenger must get the balance right; do Arsenal half-press, as they did in the first half of the season, and which somewhat worked, do they fully press or do they not press, and, how high is their defensive line? Over the past two seasons, Arsenal's best results have come with full pressure, but, full pressure over a whole campaign can lead to tiredness, as it did in 2009/10 and 2010/11. Whether they can sustain that energy throughout the whole season in a title race is a vital question, one that Robin van Persie asked himself.

For the time being, though, a return to a pressing game and the Arsenal of old has seen them move into pole position in the race for the Champions League, and is something that should continue with only 9 games left. If they continue to press as they have, a 3rd place finish is very much on the cards. 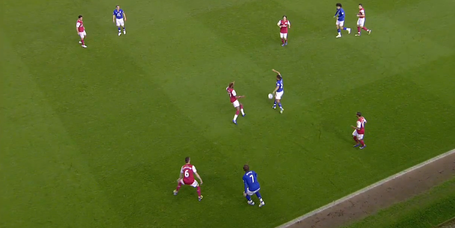 Arsenal's pressing strategy shown in the first half against Everton. Steven Pienaar's passing options are closed off, with van Persie and Rosicky covering Fellaini and Arteta, who wins the ball back, covering Osman. Koscielny has followed Jelavic into his own half, which didn't happen often in the first half of this season. 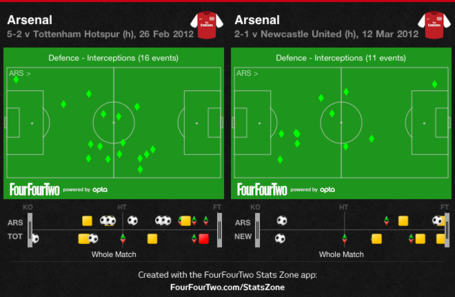 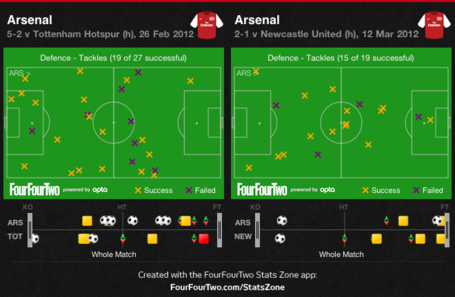 Arsenal's interceptions and tackles shown against Tottenham and Newcastle; Arsenal are winning the ball back in their own half.