Arsenal are now one point behind Tottenham Hotspur after coming from behind to beat Newcastle United 2-1, to make it 5 wins in a row in the Premier League, with the last 4 having been won after being behind, making Arsenal the first team to do this in the Premier League. Omar comin', indeed.

They, did, however, make it very difficult for themselves, missing lots of very good chances, leading to this reporter to angrily surmise that they weren't going to come out on top. They did, however, showing a spirit that may have been lacking in recent years.

Alan Pardew didn't start with two up front, with Hatem Ben Arfa on the right and Gabriel Obertan behind Demba Ba instead of the Ba-Pappis Demba Cisse partnership he's favoured in recent weeks. This approach allowed Thomas Vermaelen and Laurent Koscielny to push high up, confident that the other defender would be able to cover. As a result, Demba Ba was completely ineffectual, Arsenal started with Alex Oxlade-Chamberlain wide left and Tomas Rosicky behind Robin van Persie, in their usual 4-2-3-1 formation. Arsenal started the brighter of the teams, with Theo Walcott getting behind Davide Santon, jinking away from Coloccini and firing in a brilliant cross that Robin van Persie completely missed. Walcott was influential in the first half, and getting behind Davide Santon was a feature of his play. Arsenal heavily played to this; Sagna and Walcott had 85 touches of the ball in the first half to Gibbs and Oxlade-Chamberlain's 28. 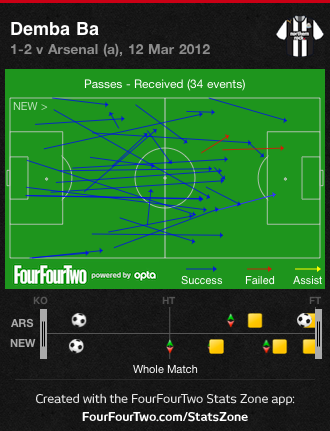 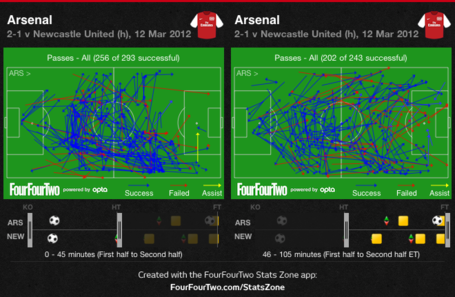 In the second half, Arsenal began to spread the play out to the wide areas in an effort to break Newcastle down. The first half, though, saw a right-sided bias.

Despite Arsenal's strong start, their pressing and passing game wasn't up to scratch, and through the lack of quality in both, Newcastle went ahead. Thomas Vermaelen gave the ball away to Chiek Tiote, who found Hatem Ben Arfa on the right. Kieran Gibbs was too slow to close him down, and when he did move towards Ben Arfa, he didn't show the left-footed Frenchman to the byline. Instead, he allowed Ben Arfa to cut in, and fire in a shot that beat Wojciech Szczesny at his near post. Newcastle, though, perhaps of their ludicrously stupid celebration, were ahead for only 53 seconds. Davide Santon got sucked in to the ball when Rosicky and Sagna combined straight from kickoff, and the former used to space vacated by Newcastle's left back to play in Walcott, who again got away from Coloccini to cross for van Persie. The Dutchman brilliantly twisted away from Mike Williamson before firing past Tim Krul. After that, though, neither team did much offensively. Newcastle worked hard to close down Alex Song and Mikel Arteta, while Jonas Gutierrez started tracking back more to stop the dangerous Walcott. A Robin van Persie free kick was the only effort of note for the rest of the half.

Newcastle took the awful Santon off and replaced him with James Perch. Perch isn't often noted for defensive solidity, but here, he was quite good, not giving Walcott lots of space behind him. Newcastle's plan for the second half was quite clearly to protect the one point on offer, as they failed to register a single shot on goal. Arsenal, on the other had, had 17, with several good chances amongst them. In contrast to their right side bias in the first half, Arsenal began to stretch the play, with Gibbs and Oxlade-Chamberlain, and later Gervinho, getting more involved. From Gibbs tackle, and then cross, van Persie blazed a right footed shot wide of Krul's goal, while Rosicky and Vermaelen had headers saved by Krul. Rosicky also had a glorious chance after combining with Walcott, who beat Coloccini, then set Rosicky up with a hard-hit pass. The force made it difficult, as did the fact that Rosicky hit it on his left foot, but he still should've scored.

Arsenal's pressing and possession play was much better in the second half. Song and Arteta began to get time on the ball, with the Spaniard controlling midfield as he often does. This gave Arsenal the platform to continue to create chances, and they finally got their just rewards.

From an Arteta set piece, Gervinho mishit his shot, after the ball had travelled through the penalty area. There were, however, 5 added minutes because of the annoying time wasting of Krul, something that Robin van Persie had picked up on. In the last of those 5 minutes, Arsenal scored. Arsenal won the ball in their corner from a Newcastle throw, with van Persie picking up the ball in midfield, and driving forward, before laying off to Song, who found the excellent Walcott. Walcott's cross was very good, and it was kept alive in the box for Vermaelen to hammer home, having run the length of the pitch in about 10 seconds. Afterwards, van Persie got into a spat with the idiotic Krul, but his time-wasting didn't matter in the end, as Arsenal are now 3 points clear of Chelsea, and just 1 behind Tottenham. 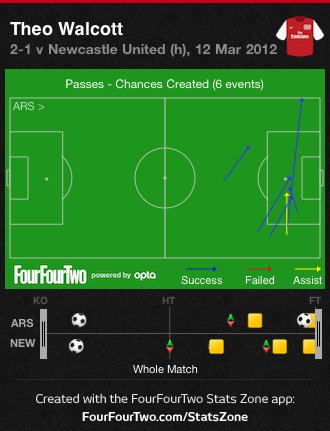 The excellent Walcott created 6 chances, most among all Arsenal players. Many came from his crossing, which was very accurate. 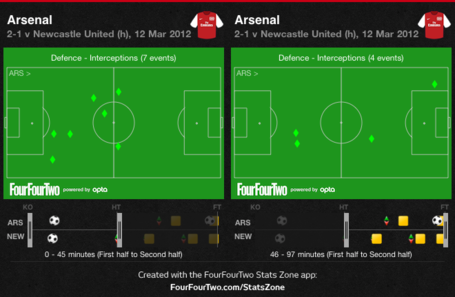 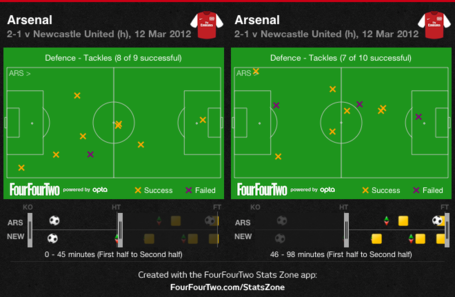 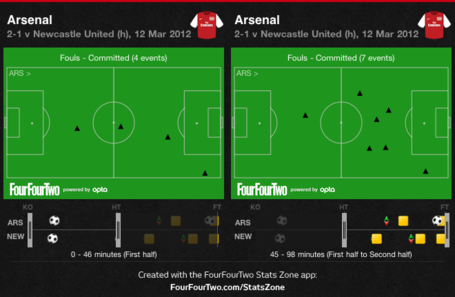 Arsenal pressed better in the second half, winning the ball higher up the pitch, and also fouling more in their efforts to win the ball back. Pressing has been a major part of Arsenal's revival, and their all-around performance was better for it.

Chalkboards, as always, from Statszone