Theo Walcott: A Purpose After All?

Share All sharing options for: Theo Walcott: A Purpose After All?

Poor Theo Walcott. All he wants to do is play through the middle and fulfill the absurdly high expectations set when he made his £9.1m move from Southampton to Arsenal at the tender age of 16. Selected for the 2006 World Cup before kicking a ball in the Premier League, the sky was the limit for Walcott; however, he, thus far, hasn't reached those sorts of heights. Often, he is accused of having "no football brain" (by a man who cannot pronounce 'penalty' properly), and while his final ball is lacking, and his finishing can be wayward, Walcott can still be an effective player. He's also a player who has undergone two changes in role in the past two seasons. Injured when Arsenal originally deployed a 4-3-3 in 2009-10, he returned when the more static Nicklas Bendtner was the main striker, he began his shift from a more traditional wide player to the inside forward role that would serve him so well the following season, where he scored 13 and assisted 9 in 38 games. This season's switch to a more direct 3 strikers style of play has seen Walcott combine his two previous roles, of winger and inside forward. It's a combination that can be deadly when perfected, as he has against Blackburn and Chelsea, but when out of sync, Walcott can be an attacking non-factor.

The problem for Walcott is that he grew up playing a position that was soon to become a dying breed. In 2006, when Walcott was bought, Arsenal envisioned a player who could replace Thierry Henry, by using his pace to get behind defenders. What had begun to happen to Arsenal, though, was that teams began to defend deeper, taking away the pace aspect. Henry was still good because he had good technical skills; players like Michael Owen and Robbie Fowler began to become less useful because they couldn't adapt. Walcott came in the middle of this period; clearly, at age 17, he didn't have the technical ability to play through the middle, so he was put out wide, a position where his pace can be an extremely benficial asset. Arsenal also hoped that Walcott would improve enough, in terms of technique and strength, to be able to play through the middle.

Walcott has always had moments; the run against AC Milan and Liverpool, where he burnt defenders with ease, the impact he made against Barcelona, scaring them with his pace, and his hattrick against Croatia. Last season, though, seemed to be the breakthrough for Theo Walcott. His inside forward role worked for him; it allowed him to play on the shoulder of defenders and make diagonal runs ahead of Robin van Persie. With his finishing improving, he was able to score 13 times, and with the ability to get behind defenders, he formed a lethal partnership with Robin van Persie on the counter attack. With the inside forward role, Walcott was encouraged to drive infield and link up with Robin van Persie, as well as receiving through balls from Cesc Fabregas and others. It was a role that suited him well; he could use his pace to get in behind and use his pace to act as a 'poacher'. He ended up having a better record than former Southampton teammate, and the player compared the most to Walcott, Gareth Bale. This season, though, has been different for Walcott. 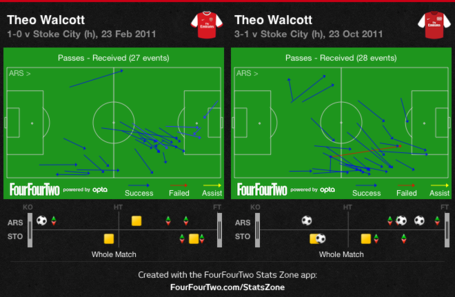 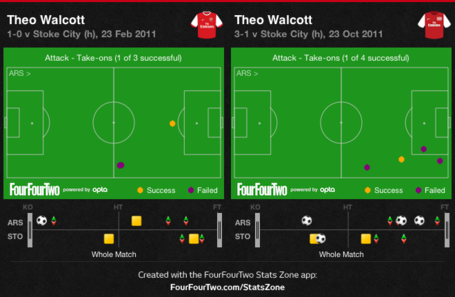 The two chalkboards above, all though a small sample size, do show the change of role Theo Walcott has had. Stoke City is a team who's defence is deep and narrow against Arsenal, and last season, Walcott made diagonal runs, and was more of a striker. This year, Walcott is playing wider, a role that doesn't suit his attributes as well.

It's been well documented, on this site, and others, that Arsenal have changed their game without Cesc Fabregas, and in the absence of Jack Wilshere. With less creative quality from the midfield, Arsenal have become more direct, and the wide players have taken on a more creative role, leading to a great spread of assists than last season. For Theo Walcott, that means a return to a more orthodox wide role, because Arsene Wenger wants to play with more verticalism and greater width with this year's team. They've lost some of the possession retention, but they still remain a great goal-scoring threat, perhaps better than last season (Arsenal are on pace to score 5 more goals this season than last). Both wide players are referred to by Wenger as either wingers or strikers, and he interchanges the terms easily. It's an accurate description of their roles; they're expected to be able to beat the fullback and deliver crosses or cutbacks, and they're also expected to make diagonal runs when Robin van Persie drops deeper. Gervinho has taken to this role remarkably well; he is an excellent dribbler and has provided 7 assists in all competitions, and while his finishing could be better, it's something that will improve with greater confidence and with greater knowledge of the Premier League. Walcott, though, has had more problems adapting to the role.

Most of Walcott's poor games this season have been against teams that defend deeply, and narrowly. These teams tend to double up against Arsenal's wide players, especially in the absence of full backs, which has affected Gervinho and Theo Walcott. Walcott's lesser technical quality, when compared to Gervinho and Alex Oxlade-Chamberlain, and even Andrey Arshavin, prevents him from dribbling past left backs unless they buy a quick feint. By denying Walcott space in behind, you take away his preferred move, which is the cutback from the byline area. Last season, he was able to occasionally beat teams who held deep lines by cutting infield, but as his role changed, he stopped making these diagonal runs against deep sides, shooting fewer times this season. Against teams that give him space, he can be devastating; Blackburn and Martin Olsson gave him too much space last Saturday, as did Norwich in November, and Chelsea in October. In those games, he's been able to beat the full back and also come infield and shoot or pass, showing how effective the role can be.

Walcott is also very much a confidence player. Over the Christmas period, Walcott was sick, and was reported to have lost a lot of weight. He, still, however, played in two of Arsenal's three games, perhaps erroneously. In those games, he was poor, missing a one on one against QPR and having little impact against Fulham. When confident, as he was at the beginning of the season, and with space, Walcott can be devastatingly effective, as evidenced by the amount of assists for Robin van Persie. His bad decisions also become less of a problem, either not occurring, or being overshadowed by good play. Theo Walcott does make plenty of poor decisions, and he can be a terrible passer. When he plays against teams that cut off space in behind, he often has little impact. Perhaps, then, when Gervinho returns, he'd be better suited for a supersub role, to stretch teams, and to start against teams that would give him space. We've seen how effective he can be when teams give him space--Robin van Persie loves him for it. With better use of Walcott's positive attributes, either through his adapting to the role he is now expected to play, or by using him as a sub or against teams that give him space, his good qualities can be maximised and his negative attributes diminished. 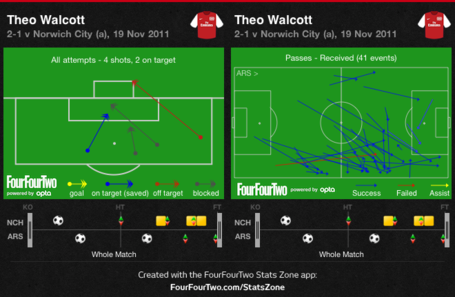 This is what we want Walcott doing; against Norwich, Tierny gave him too much space, and Walcott responded with a wonderful performance, setting up Robin van Persie as well as creating 3 other chances. He also had 4 shots, with one cleared off the line, showing what he can do when he gets space to come infield.