The North London Derby was, as they have been for a few seasons now, full of goals and terrible defensive play. Arsenal performed similarly to how they played against Chelsea in October; incredibly open at the back, before closing up a bit, and playing on the counter attack. Both managers made changes from the expected starting lineup; Arsene Wenger named Yossi Benayoun instead of Gervinho, while Harry Redknapp named two strikers, Emmanuel Adebayor and Louis Saha, and played Niko Kranjcar on the right of a 4-4-2 instead of Aaron Lennon and Rafael van der Vaart.

Tottenham started the match better, passing the ball in a more composed manner, and denying Arsenal time on the ball. The lead, however, came from a counter attack, as many of Tottenham's goals against Arsenal over the past few years have been.

Laurent Koscielny and Thomas Vermaelen had trouble when up against two strikers when Arsenal played AC Milan, and perhaps, having seen that, Harry Redknapp played two strikers. This is problematic because while both Koscielny and Vermaelen like to win the ball back early, Vermaelen is far less comfortable when covering than Koscielny. When Koscielny pushed up as Adebayor got the ball, Vermaelen should've pushed up alongside him and gotten tight to Louis Saha. Instead, a run from the Tottenham midfield, and Song's failure to cover that run saw Vermaelen track it, leaving Saha open. Kieran Gibbs then should've moved over to cover Saha, but instead, got stuck in no-man's land, and Saha had all the time in the world to get off his shot, which, though tame, got enough luck to deflect over Wojciech Szczesny

Vermaelen begins to track the run of Kyle Walker, left by Alex Song. He then realises that Gibbs has left Saha uncovered, but can only deflect the ball over Szczesny.

The two striker combination was causing Arsenal's defence trouble throughout the first half, with the Gunners susceptible when Adebayor or Saha got the ball. Vermaelen and Koscielny won most of the aerial duels, but when they got on the ball, Arsenal had problems with their defensive positioning. The second goal came about partially because of that and partially because Kieran Gibbs was unable to deal with the pace of Gareth Bale when he got into a poor position. 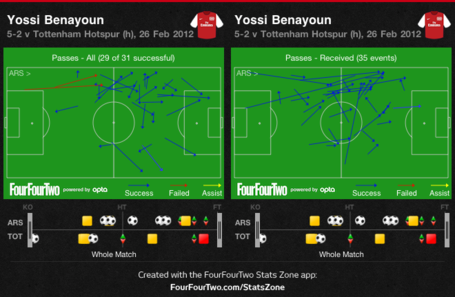 Arsenal, though, had been the better team since the first goal, and Tottenham's second came against the run of play. They were putting pressure on Tottenham's back line and midfield, and Tottenham were dropping deeper. Their defending, however, wasn't particularly good. Both Kranjcar and Bale were letting Arsenal's full backs get forward, and with Yossi Benayoun coming in field, Arsenal had control of the midfield, and were able to pass the ball better than they had in the first 5 minutes. Mikel Arteta, Rosicky and Alex Song were making tackles and interceptions, preventing Tottenham from playing further up the pitch. 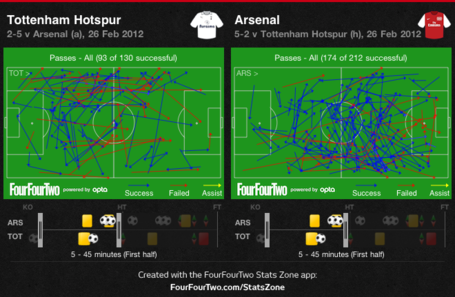 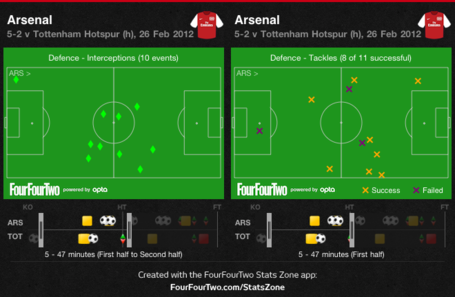 Arsenal pressure forced Tottenham to become more direct, and Arsenal began to regain the ball in the middle of the park. They were able to exert more pressure on Tottenham, forcing them deeper, while Tottenham weren't much of a cohesive, attacking threat.

The pressure eventually told off, with Bacary Sagna continuing a run into the Arsenal penalty area to beat Gareth Bale in the air and get Arsenal back in the game. Both Arsenal full backs had been involved in the goal, with Gibbs collecting after Robin van Persie's shot and hit the bar and Sagna heading home. Both were that far upfield because Tottenham failed to effectively track them, and because Arsenal's two wide players had gone infield, with Walcott taking up a second striker position. Minutes later, poor defending from Spurs, and the deepness of their defence saw Arsenal level through a wonderful Robin van Persie strike. 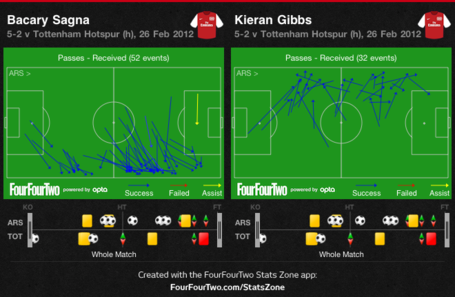 Arsenal's fullbacks received the ball in attacking areas far more than Tottenham's fullbacks did; both Gareth Bale and Niko Kranjcar did a poor job of tracking their man. This gave Arsenal natural width and allowed Benayoun and Walcott to come inside, and help control the midfield. 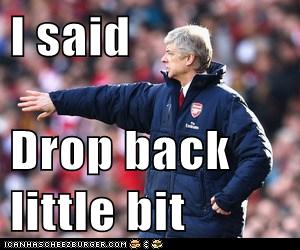 There were several tactical changes at halftime; Harry Redknapp took off Kranjcar and Saha for van der Vaart and Sandro, looking to match Arsenal in midfield, as Redknapp felt that Arsenal were coming through the middle too easily. Taking off Saha, though, allowed Arsenal to have a 2 v 1 situation at the back, something that Koscielny and Vermaelen prefer. Arsene Wenger also had his team play a little bit deeper, with Alex Song dropping deeper, giving license to Sagna and Gibbs to go forward without as much worry about being exposed on counter attacks. 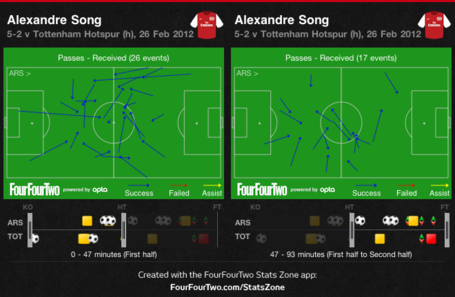 Song sat slightly deeper in the second half, as Arsenal played more on the counter attack.

It was counter attacks that saw Arsenal take a two goal lead--Bacary Sagna got forward to assist for Tomas Rosicky, and then Robin van Persie held off Ledley King and Younes Kaboul to assist for Theo Walcott. Benoit Assou Ekotto was left isolated on the first goal, with Rosicky's mobility and Sagna's presence creating a 2 v 1 situation, and he was completely out of the picture for Walcott's goals. In that regard, both of Redknapp's substitutions had failed, with Sandro not picking up Rosicky's run, and van der Vaart, nominally on the left, coming in field, forcing Assou-Ekotto to provide width. Arsenal's 5th goal came from a simple ball over the top to Walcott, with Spurs in complete disarray. Walcott's first goal also saw the danger of double marking Robin van Persie: While it may take away his own goal-scoring threat, it creates space for other players, space Walcott took advantage of today, and space that Henry took advantage of two weeks ago.

As Arsene Wenger said, today's peformance was a

performance that on the spirit side, the technical side, the drive of the whole team, on the style of the game we want to play everything was perfect

Despite going two goals down, Arsenal were never out of the game, and the control of the midfield penned Spurs in. He's been criticised here for not being the best tactician, but telling Song and the whole Arsenal team to sit deeper was the correct response to the first half; Arsenal were going to get chances on the break, and Theo Walcott got the space he needed to be dangerous. In the first half, without space, he was abysmal; in the second half, he was awesome. Arsenal always dominated the midfield, thanks to having 3 v 2, and sometimes 4 v 2 in the first half, and 4 v 3 in the second, because of Benayoun coming inside. Benayoun also helped Kieran Gibbs out defensively with Gareth Bale; Arsenal's 4th goal came after Gibbs and Benayoun won the ball off of Bale, and then Benayoun hit an excellent ball forward. Tottenham may be 7 points ahead in the league, but today's result reaffirmed that there hasn't been a power shift.