What happens when two bloggers, both sleep-deprived and exhausted after 14-hour work days, come up with more content for your North London Derby-starved eyes? Why, clearly, a fantasy draft happens. Kevin McCauley of Cartilage Free Captain and I mocked one up last night. The rules were that we assumed everyone would be 100% fit and at their peak, and the game was a one-off, so potential future growth isn't a thing. Kevin had first pick, and then we snake drafted from there, each putting together a team from both Arsenal's and Tottenham Hotspur's squads. 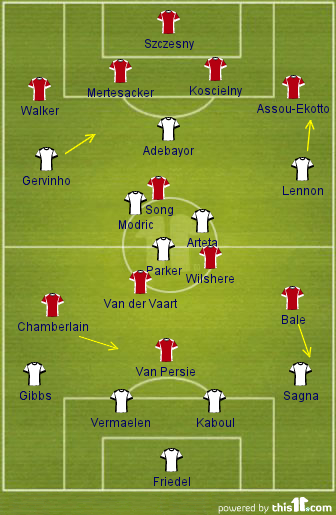 The teams in full, after the jump:

I think I made a mistake not taking a bench striker, and possibly taking Per before King. What say you?