Saturday's game, while an interesting tactical battle, was covered fairly well in the relevant episode of Fusillade. In order to not be redundant, we're using a pictoral/chalkboard analysis to supplement what was said in Fusillade. You don't have to listen to Fusillade in order to understand this; vice/versa, you don't have to read this to understand what we said on Fusillade, but they're just nice complimentary pieces.

Despite playing 120 minutes on Wednesday, Sunderland were energetic in the opening stages of Saturday's match. Offensively, they lacked an outball with the dimunitive Stephane Sessegnon playing through the middle and Frazier Campbell up against Thomas Vermaelen on their right, but defensively they were organised superbly, much like how Arsenal played against Barcelona a year ago (is it really a year? Wow).

This involved limiting the space between the attacking line and the defensive line, making it difficult for Arsenal to play through them; indeed, they ended not completing a single through ball. Frazier Campbell tracked back to join Phil Bardsley and double team Alex Oxlade-Chamberlain, who lacked passing support from Thomas Vermaelen. On the right, Bacary Sagna got involved more, and James McClean tracked back less, giving Arsenal a bias towards their right hand side. Theo Walcott, though, couldn't get in behind a left back who was able to match his pace in Kieran Richardson. Walcott did do a better job of making inside runs, but ultimately, he was blocked off by an excellent Sunderland defence.

Here Sunderland are very compact, with van Persie double marked and the player with the ball under pressure.

Here, Frazier Campbell and Phil Bardsley double team on Oxlade-Chamberlain, preventing him from getting inside.

Arsenal passed the ball a lot on Saturday, and at an excellent rate, limiting the chances Sunderland had on the counter attack. On the other hand, though, they were unable to break Sunderland down. Alex Song and Mikel Arteta tried several through passes or passes over the top, but they were cut out by Michael Turner and John O'Shea. Sunderland's pressing in the middle forced Arsenal to go out wide, where Oxlade-Chamberlain was double teamed and Walcott was ineffective. 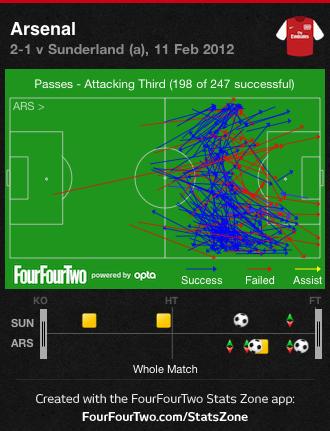 Arsenal passed the ball well, but were unable to effectively penetrate Sunderland's penalty box because of their effective defensive system.

Sunderland were also extremely effective at marking Robin van Persie. Often this season, when he's been closely marked he's dropped deeper and then made runs (like against Borussia Dortmund), but here, John O'Shea was comfortable following him out, with Michael Turner sweeping behind. van Persie was limited to 2 shots, and was ineffective until the introduction of Thierry Henry. With a second opponent, Sunderland's central defence became confused over whether they should go with van Persie, or Henry, or go into a one v one situation. In the end, theydidn't go with Henry until he met Andrey Arshavin's cross. 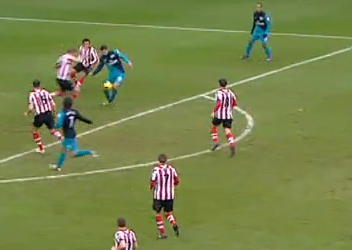 Here, van Persie is almost triple marked by Sunderland, preventing him from finding a shot, Theo Walcott or Tomas Rosicky, despite the latter two being in space.

With Sunderland so disciplined and preventing Walcott and Oxlade-Chamberlain from cutting the ball back along the ground, Arsenal resorted to crosses. They were largely ineffective until the introduction of Andrey Arshavin. He attempted 3 crosses, completing 2, both of which were right on the mark into the six yard box. The first was headed by Robin van Persie; the second was the assist for Thierry Henry. Not only was the placement of the crosses impressive, but Arshavin also got his crosses between two defenders, which is something neither Walcott nor Oxlade-Chamberlain could do.

Crossing is something that Arsenal are generally poor at, but Arshavin showed what benefit can be had from a good run and a good cross. Starting 4-4-2 may not suit Arsenal, but finishing 4-4-2 can be an effective way of getting goals if Robin van Persie is marked out of the game.