Arsenal were unable to gain points on Chelsea and have now dropped 13 out of their last 18 points, falling back into 7th place behind Newcastle and Liverpool, neither of whom have been very good recently. Oh, and Arsenal drew with Bolton, who had conceded 25 goals in 11 games at home, winning 2 and drawing 1. Well done to all concerned!

It could've been so different, too. Arsenal started the first half like a team that had comeback against Aston Villa from 2 goals down, playing with a high tempo, passing the ball confidently and getting in behind a Bolton defence that was holding an extremely high line. Aaron Ramsey and Robin van Persie, however, were unable to take advantage, and then, most shockingly, Theo Walcott fluffed a 1 on 1 opportunity, shooting straight at Adam Bogdan after being played in by a wonderful Alex Oxlade-Chamberlain through ball. However, buoyed by Arsenal's profligacy, Bolton came into the game. David N'Gog got behind Koscielny and shot at Szczesny, who parried. N'Gog then got played in again by David Wheater's header, and, after taking the ball down, fired just wide of the post. At this point, around the end of the first half, Arsenal began to tire, and became less dynamic with the ball. It looked as though they were closing out a match, rather than trying to win one. As Bolton pushed forward, Arsenal began to lose attacking width on the left; Vermaelen had been making good runs in the first 30 minutes, but afterwards, didn't, as Chris Eagles became more involved.

Those hoping for a second half revival were to be disappointed. For 20 minutes, Arsenal did little before Bacary Sagna (FULLBACK!) drove down the right and crossed for Robin van Persie, who's deft touch hit the post. Then, Arsene Wenger made his customary 68th minute substitution, bringing off Alex Oxlade-Chamberlain for Thierry Henry. It was, however, a questionable move. Oxlade-Chamberlain had had a solid match, making the pass of the match for Walcott and winning all 4 of his dribbles. Theo Walcott, on the other hand was atrocious; his passing was terrible, he was too weak on the ball, he missed his 1 on 1 chance and he was also poor in his decisions, trying to outrun the entire Bolton team from his corner, and predictably, losing the ball just outside of Arsenal's penalty area. Furthermore, bringing on Henry was the wrong decision. Henry never played on the left hand side, but instead, moved to the middle, joining van Persie. He was, though, static in his movement, off the pace and also attracted long balls. Arsenal needed more creativity, not another number forward, and it is odd that neither Yossi Benayoun nor even Andrey Arshavin were brought on to provide that creativity. With Henry staying in the middle, Thomas Vermaelen was the only Arsenal player on the left, and Bolton, through Eagles and then Tuncay, attacked Vermaelen.

Arsenal still had one chance left, made through pure brilliance from Robin van Persie. He twisted and turned, and then floated a delicious chip over Adam Bogdan. The shot, though, hit the post, and eventually the rebound came to Theo Walcott, who, from 3 yards out, shanked wide. It may have been a hard chance, but it was one that a player who believes they should get £85,000/week should score.

Bolton could've won the game in the dying minutes. A Kevin Davies flick for Mark Davies set him in, and the midfielder was brought down by Szczesny, who did get a touch of the ball. If Chris Foy had given the penalty, though, Arsenal couldn't of had any complaints.

Ultimately, Arsenal were let down by a lack of creativity. Bringing on Henry killed the wide play, while Aaron Ramsey, once again, looked tired. Tomas Rosicky couldn't do much in his 10 minutes, and Alex Song also looked tired. A fresher, and more confident, Bolton side were able to press Arsenal in the midfield, and the combination of taking Oxlade-Chamberlain off and Walcott's poor quality denied Arsenal the pace to stretch Bolton. The gap between Arsenal and Chelsea remains 5 points, but at some point, Chelsea will stop dropping points. Arsene Wenger has said that every game is now a "cup final", which, with 15 games left, hints of desperation. It also hints at even less rotation, which will only provide similarly poor performances. 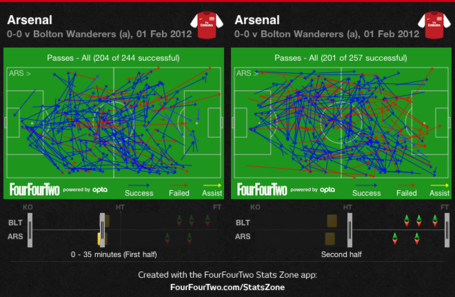 Arsenal's passing was quicker and at a higher tempo in the first 35 minutes, and thus, they were able to get in behind Bolton's pressure. After 35 minutes, though, they dropped and lacked that creativity, with all 3 midfielders off the pace due to tiredness and return from injury. Bolton's pressure forced Arsenal to go wide, where the lack of quality from Walcott really hurt Arsenal's attacking ability.

Finally, to end tonight, I quote Goonerholic's fantastic piece, which you should all read.

What I don’t understand is that when we have our thinnest squad in fifteen years, and we have a buyers market, and we have players in the squad no longer trusted to be anywhere near the competitive matches, we have broken full-backs who may well come back in the coming weeks and break again, we have one bloody goalscorer in the club who is a Shawcrossing away from missing games, we haven’t spent SOME of the transfer fund on strengthening obvious areas of weakness.