Trying to piece together some analysis of Arsenal's sweeping victory over Newcastle.

In many ways, a game that featured such bad defending and so many goals is hard to tactically analyse, especially when the two halves were so different. Yet, that in of itself is a topic of interest, because Arsenal did change their play off the ball in the second half. Despite that, there are still some concerns about the defending off the ball; not only did Arsenal concede 3 goals, but they were also outpassed by a team that is the most likely to play a long-ball in the Premier League.

Yet, as Arsene Wenger has said before, in regards to an absurd Andre Villas-Boas comment after the latest 5-2 shellacking of North London's chief producer of mugs, he doesn't much care if his team dominates possession; he wants to play the type of game that allows his team to create the most amount of chances. Obviously, against a Newcastle team that had a patchwork defence but featured their best two strikers, Wenger felt that Newcastle would prefer to attack than defend. Thus, he probably felt that Newcastle would leave space behind, space that could be exploited by the pace of Lukas Podolski, Alex Oxlade-Chamberlain and Theo Walcott. After 20 minutes, it seemed as if the plan had worked to perfection, with Theo Walcott producing a Thierry Henry-like run and finish from Lukas Podolski's pass to finish off an excellent counter attack.

Yet, Arsenal failed to build on that goal, and, despite Newcastle positioning their defenders up the pitch, there were very few successful counter-attacks. Walcott, of course, missed a chance to play in Santi Cazorla, but that was a rare Arsenal chance in a period of Newcastle dominance, which was helped by Arsenal retreating into their typical two banks of four. We've seen various uses of two banks of four this season; against Wigan, Arsenal defended especially deeply in the final 10 minutes, while against Manchester City and Liverpool they used it to press early, and then fall back. The latter two is the optimal way for Arsenal to use two banks of four, as it enables Arsenal to win the ball higher up the pitch, and thus counter better. Arsenal didn't do this against Newcastle; they were passive in their defending, looking to only defend the penalty box. Such a strategy requires very good concentration, something which Arsenal's defenders patently don't have; thus, the concession of the Newcastle equaliser from an utterly needless free kick was no great surprise. What was a surprise was how deep Lukas Podolski and Alex Oxlade-Chamberlain were positioned; by being positioned this deep, it meant that Newcastle could usually snuff out the Arsenal counter attack before it started, defeating the purpose of playing a counter-attacking game. 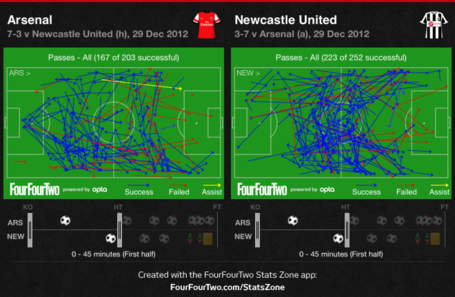 Wenger admitted after the match that the lack of pressing in the first half was both "tactical and psychological", and that he changed the team's approach for the second half. The approach did change; Arsenal were more proactive without the ball, and defended higher up the ball. Newcastle still had more passes, but Arsenal's passing was much more purposeful, and much more devastating, with more attacking players able to get into the game. Interestingly, Mikel Arteta was not as influential as he usually is, as Arsenal built from the back in a different way. Unlike Per Mertesacker, Laurent Koscielny was able to carry the ball out of the back, and pass forward either for Bacary Sagna, who was far more influential with the ball than he has been, or for Arteta or Wilshere. Wilshere and Cazorla mainly received the ball in areas higher up the pitch, with Sagna passing the most to Cazorla and the second most to Wilshere. On the other side, Kieran Gibbs had an excellent game going forward, overlapping well in the second half for Lukas Podolski, who was then free to come inside, as he prefers to do. 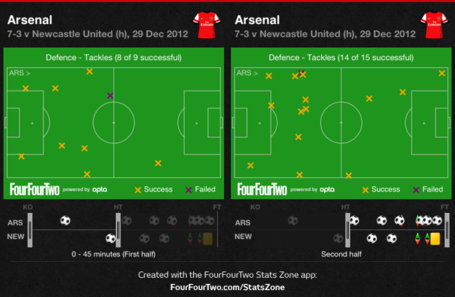 Despite the improved pressing, Arsenal still conceded two very sloppy goals in the second half. The first one, scored by Sylvain Marveaux, has been attributed to a Kieran Gibbs error, but he had come inside to track his runner, Papiss Cisse, who played on the right wing. Worryingly, Bacary Sagna got easily beaten by a not very good Gabriel Obertan, who was allowed to play a cutback across the six yard box. Marveaux was free at the near post, but not because of Gibbs, but because Jack Wilshere had let him run, unmarked, into the six-yard box. It's odd, as Wilshere had been running with him, but then failed to continue to do so. Last week we spoke about how Wilshere's not the best defensive player in the midfield, and how it makes Arsenal worse defensively; we saw the result of that here. Either Wilshere has to track Marveaux, or he has to communicate to the back four that he hasn't tracked Marveaux, and then everyone switches over.

Gibbs, though, was at partial fault for the third goal. Again, it came from the right hand side. This time, Wilshere did go with Marveaux all the way into the penalty box, before he checked back, and was able to make a delicious cross for a free Demba Ba. Ba had got away from Kieran Gibbs, who, having looked behind him, switched off and let Ba get ahead. Furthermore, Sagna didn't do a good enough job closing Marveaux down, highlighting once again the inaccuracy in Arsenal's pressing. It's something that they have to get right, as they play better when they play with a higher tempo across the pitch; by pressing, they can play the ball quicker, and have quicker, more attacking movement. It also better suits their defenders, but, having seemingly been drilled into two banks of four, they may have to re-learn how to press effectively again.

Going forward, though, Arsenal were excellent. Theo Walcott may not be the perfect centre forward, but against defences that leave space behind, he can be devastating. Yet, the most impressive aspect of his performance was perhaps his very improved dribbling. That dribbling created one goal for Olivier Giroud, sealed the hattrick, and also nearly created another goal when he beat two then had his shot deflected behind. When Arsenal haven't played well this season, it's because they've usually lacked a bit in creativity, and lacking a player who can make a goal out of nothing. Walcott is starting to become that player; he did so against Wigan, and did again yesterday, while also showing impressive movement. There are still games where Olivier Giroud is a worthy option at centre forward, and Walcott can easily do these things from the wide areas, as he again showed yesterday. It gives Arsene Wenger options; hopefully, these options are there in the long term. 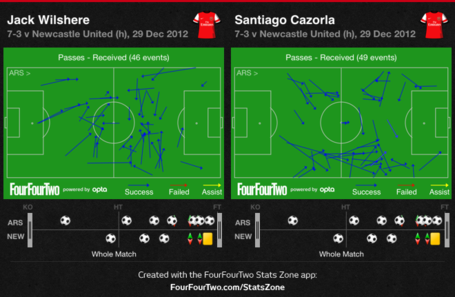