It may have been unintentional, and down to injury, but Roberto Martinez's deployment of James McCarthy as a roaming libero gave Wigan the platform to almost get a result against Arsenal. When in possession, McCarthy was allowed to push into midfield, completing 55/64 passes, 5th overall, and creating three chances. When Arsenal had the ball, particularly in the first half, McCarthy manmarked Santi Cazorla, limiting the Spaniard's influence. That was problematic for Arsenal; with Cazorla out of the game, they had problems creating chances unless Jack Wilshere pushed forward into the space that Cazorla vacated when he tried to get away from McCarthy. But by doing that, Wilshere negatively affected Arsenal's midfield shape, occasionally leaving Arteta to do too much. 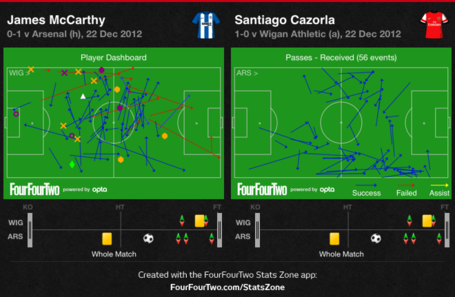 The biggest problem for Arsenal, though, was the way Wigan easily controlled the game for long periods. In recent seasons, Arsenal have dominated possession in matches between the two sides; this time, Wigan had the slight advantage in possession, 50.4% to 49.6%. There are two main contributing factors to this: firstly, Wigan outnumbered Arsenal in the midfield when in possession, with McCarthy stepping up to add a fourth body, which contributed to the second factor, which was Wigan's shape. Instead of the usual 3-4-3, or 3-4-1-2, the inclusion of McCarthy as a nominal defender changed Wigan's shape into something resembling a 4-1-2-1-2, or, with the wingbacks as advanced as they were, a 2-1-4-1-2.

Simply put, Arsenal's players didn't know who to press, and who to mark. With Shaun Maloney playing a central role, but given the freedom to drift, especially to the left side, Alex Oxlade-Chamberlain was forced to drop deeper to help Bacary Sagna against the double threat of Maloney and Jean Beausejour, the left wingback. And, because Theo Walcott to track back and press McCarthy, Wigan always had a free man in the middle of the park. Furthermore, the two Wigan strikers, Aruna Kone and Franco Di Santo drifted from their central role to the flank, always looking to create overlaps. They couldn't be followed by Per Mertesacker or Thomas Vermaelen for fear of leaving open a big enough gap to be exploited by a midfield runner such as Maloney. Thus, Arsenal retreated into their system of two banks of four, hoping the weight of numbers, plus pressing in their own half combined with playing a highish line, would be enough to thwart Wigan's attacks, and, for the large part, it affected the quality of their final ball, which was poor throughout.

Because of this, Arsenal's own attacking game suffered. The best way to exploit 3 at the back, or, as Wigan's system was, 4 at the back with very attacking wingbacks, is to play the ball through the wide areas. Yet, Arsenal, especially in the first half, had problems doing this. The quality of the movement was poor in the fist period, with Arsenal looking as if they still wanted to play through the middle, even though though they couldn't, because of McCarthy's man-marking of Cazorla and the way Wigan tirelessly pressed when Arsenal's attacking players had the ball. Furthermore, when Arsenal could break, the deep defensive positioning of Oxlade-Chamberlain and Lukas Podolski meant Wigan could usually get enough back to cover their bursts forward. 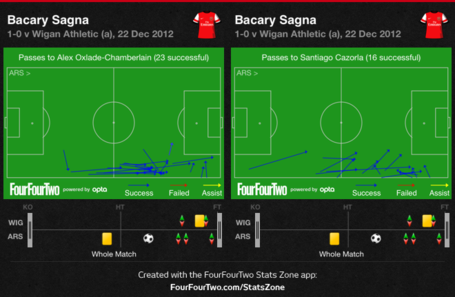 Interestingly, Wigan let Mikel Arteta and Bacary Sagna have the ball, preferring to win the ball off of the attacking players, somewhat conserving energy, and also denying space in behind for Theo Walcott to run into. Thus, Sagna and Arteta had time to find Oxlade-Chamberlain and Cazorla and hope their individual skill could allow them to break past Wigan's defenders and create chances. This didn't happen in the first half, but in the second half, when Arsenal's passing became quicker, Oxlade Chamberlain was able to work 1v1 situations and create chances, as he did twice for Theo Walcott. With Beausejour a poorer defender than Ronnie Stam, Arsenal had identified the Wigan left flank as the area of attack, directing 52% of their attacks down that flank. Unsurprisingly, the goal came from the right flank, but the extent the left flank was ignored was surprising. Lukas Podolski was deprived of Kieran Gibbs' overlapping runs, and thus had to stay wider, limiting his effectiveness. 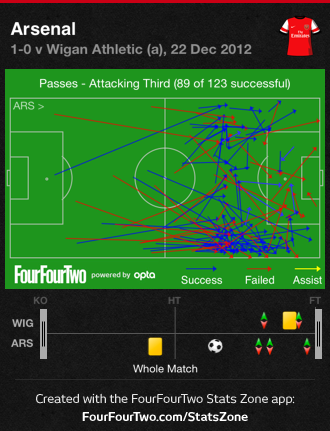 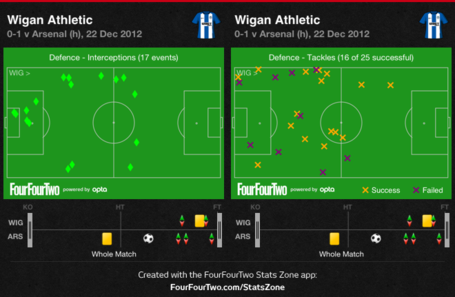 Gibbs didn't make many overlapping runs because Arsenal were concerned about being left short-handed at the back, especially with the floating movement of Di Santo, Kone and Maloney. In the second half, Arsenal got their shape a little more right, and moved the ball quicker, but there were still issues, some of which are longstanding, with the midfield shape.

With Arsenal not always pressing, Jack Wilshere took it upon himself to press, and to fill the space Santi Cazorla vacated with his lateral movement. This charging about, while endearing himself to the fans, can leave Mikel Arteta over-exposed. Arteta is a fine player, and his defensive positioning is exemplary, but he can be out muscled and out manouevered in the midfield, and left with too much space to cover. That's been more noticable since Abou Diaby limped off the pitch 3 months ago, and it's one reason why that, despite the clean-sheet, Arsenal looked somewhat vulnerable defensively yesterday.