A look at the tactics behind Arsenal's comprehensive 5-2 victory over Reading.

Perhaps he shouldn't have been so adventurous. By playing Jimmy Kebe and Jobi McAnuff in an attack-minded 4-4-2, Brian McDermott hoped to recreate the attacking spirit that had seen his Reading team go deservedly 4-0 ahead against Arsenal 7 weeks ago in the 4th round of Capital One Cup. This time, perhaps, Reading would have that attacking play, but wouldn't be so porous defensively. Yet, in trying to get Reading to attack Arsenal's weaknesses, they exposed their own: the flanks, and cutbacks, as Gary Neville detailed to precision on the Sky Sports pre-match show. With Reading playing 4-4-2, they were ceding control of the midfield, and thus, their attacking players were going to have to track back, and do defensive work.

Jobi McAnuff was always going to track back; he is, after all, Reading's captain. Jimmy Kebe, though, is a mercurial talent, kind of like Andrei Arshavin, and he didn't seem that bothered with defending. Kieran Gibbs profited from the amount of space left behind, delivering the first two assists of his Premier League career. It also led to the return of Arsenal's devastating left side, which had been missing since about October, becasue of injury and loss of form. While a lot of attacks (38%) came from the left, Arsenal were by any means one-dimensional, with a healthy proportion of attacking play coming from the middle and right. Indeed, moments before Arsenal's opening goal, a brilliant combination between Theo Walcott and Alex Oxlade-Chamberlain nearly set the latter in, but for a poor second touch. 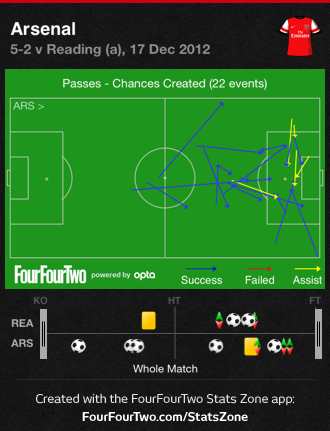 Reading's defensive shape allowed for Arsenal to be more dynamic and fluid. They started off playing a higher line, but not coordinating their pressing. The two in midfield would press, leaving space behind the lines for Santi Cazorla and Jack Wilshere. And, with Theo Walcott playing up front instead of Lukas Podolski, Reading's defenders didn't want to push up too much and be exposed, as they almost were in the 3rd minute, when Walcott made an excellent run in behind. Thus, when faced with the pace of Walcott and Oxlade-Chamberlain, they started dropping off, giving more space to Cazorla and Wilshere to play in front of them. From there, Arsenal were able to play combinations in and around the penalty box, a rarity this season. 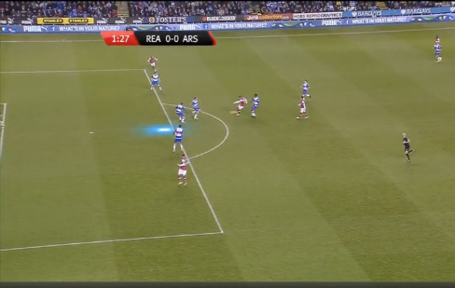 Reading are playing a fairly high line, but aren't pressing the ball, allowing Oxlade-Chamberlain to shoot. 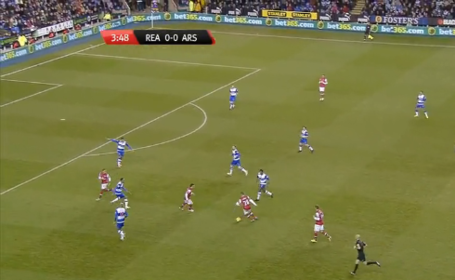 Here, Walcott's movement, to the left of the picture, offers a threat in behind. With his pace, giving this much space is extremely dangerous, and Reading's back four visibly dropped off afterwards (though, they didn't coordinate their positioning with their midfield, giving Arsenal space).

There was also more balance to Arsenal's play. With Kebe not tracking Gibbs back especially well (and when he did track back, he did a poor job of stopping the cross), Lukas Podolski was allowed to come inside and act in his preferred position, as a second striker. It's where he scored most of his goals for Koln last season, and where he has scored most of his goals for Arsenal this term, making runs beyond the front player. On the other side, Alex Oxlade-Chamberlain had one of his better games this season, and gave Arsenal width on the right-hand side, intelligently choosing when to come inside. Thus, Bacary Sagna didn't have to get forward as much, enabling Arsenal to better cover Kieran Gibbs' forward forays. Because of this, Gibbs was able to influence Arsenal's attack much more than he has in recent weeks, contributing two assists, and also creating space for Lukas Podolski. As a result, four of Arsenal's goals came from the left side. 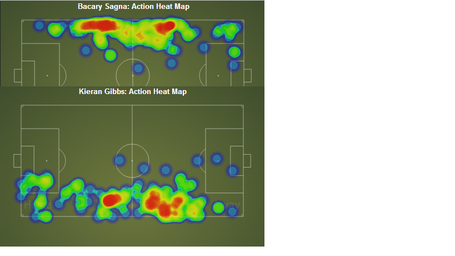 Arsenal attacking to the left 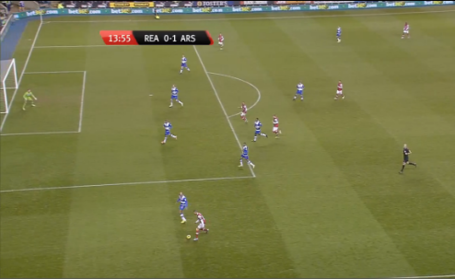 Here, Kieran Gibbs' forward run allowed Lukas Podolski to make an inside run. Alex Oxlade-Chamberlain gives the move balance by staying wide on the right, allowing Sagna to remain at the back, giving Arsenal cover.

Another aspect of Arsenal's play that improved were the amount of times Santi Cazorla made runs from midfield into space created by the movement of Arsenal's attacking players. If there can be a criticism of Cazorla, it is that he doesn't get into enough good goal-scoring positions, as opposed to his predecessor at his role, Cesc Fabregas, who was able to not only control play from deep, but also play as a second striker. Before the match, Gary Neville highlighted the lack of driving runs from Cazorla, which has contributed to Arsenal's static movement when in possession. Against Reading, Cazorla did make these runs into space created, and, as a result, scored 3 fairly simple goals. If Arsenal are to rediscover their goal-scoring form, runs from midfield will be especially important, as these runs can find the space that the attacking trio might not be able to take up. Jack Wilshere has also made these runs in recent weeks, and against Reading, found himself in a lot of positions in the final third. If he and Cazorla can continue this rotation, it makes Arsenal more fluid and harder to defend against, and makes goals like Arsenal's 4th, where Wilshere played as the #10 and Cazorla made an attacking off the ball run into space, more of the rule rather than the exception. And with Mikel Arteta given the space to control the tempo of Arsenal's play by this movement, as he was against Reading, the two more attacking players, Wilshere and Cazorla, can worry less about collecting the ball in deeper positions, and more about playing in the final third. 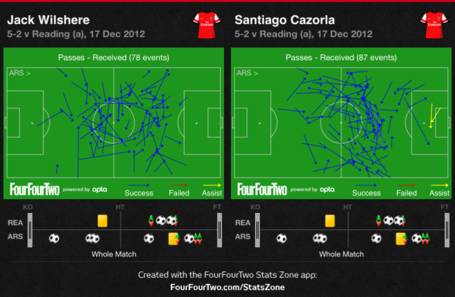 Finally, last night was Theo Walcott's big chance to show that he can be a Premier League striker. While he scored late on (after missing a glorious chance in the first half), his overall play and movement was impressive. His pace and off the ball runs made it harder for Reading's defenders to squeeze space, forcing them to drop deeper, and further away from their midfield. Walcott's inclusion also allowed for greater fluidity; because he's comfortable as playing as a winger, he was happy to drop off to the right, dragging a centre back with him, and creating space for Arsenal's midfielders to run into, as both Santi Cazorla and Alex Oxlade-Chamberlain did for Arsenal's 3rd goal. 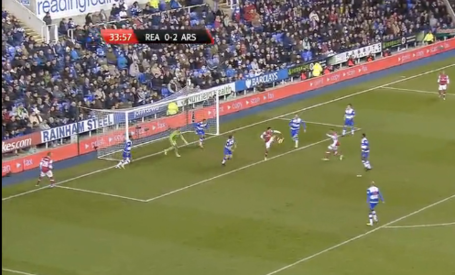 Cazorla and Oxlade-Chamberlain can take up free positions in the box because Walcott drifted to the flank. Gibbs, again, provides the width.

Based on this performance, Walcott does deserve another chance up front, yet it should be against a team that will allow Arsenal to play to his strengths. Because Reading initially wanted to squeeze space, forcing their defence back created space for Arsenal to play; however, if Reading had set up with two deep banks of four, Walcott's effectiveness would've been lessened. Against teams that defend deep, Olivier Giroud is the better option; because of his physicality, his movement will be more effective against these sort of teams. Yet, here, Theo Walcott was the right option. Because Giroud doesn't offer the threat in behind, teams can push up and squeeze space. While they used to do that when Arsenal had Robin van Persie, the movement from Arsenal's wide players and midfielders was much better, and took advantage of the space in behind. Arsenal have been unable to show this movement consistently enough this season, partially because of their lack of confidence, and partially because Giroud is less comfortable dropping off into a midfield or wide position than van Persie. Thus, the obvious choice to play centre forward on Saturday seems to be Theo Walcott.