Before the match, I discussed the possibility of Arsenal controlling the midfield. Despite a man advantage, though, they utterly failed to do so, and Michael Carrick ran the game with Arsenal players rarely putting pressure on him, and spreading the ball to Rafael, pushing forward, untracked by Lukas Podolski, and Wayne Rooney. 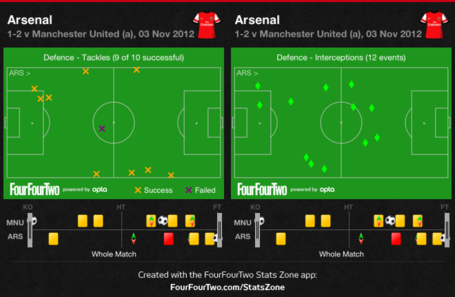 Meanwhile, Wayne Rooney and Robin van Persie kept Mikel Arteta in close-attendance, which resulted in Arsenal's top passer being Per Mertesacker, and the second top passer being Thomas Vermaelen. Vermaelen to Mertesacker was the most common combination of the game, showing that despite Arsenal having an edge in possession, it was all at the back, as the below chalkboard shows: Arsenal were simply unable to break through Manchester United's defence, especially as the two main creative players, Jack Wilshere and Santi Cazorla, struggled. 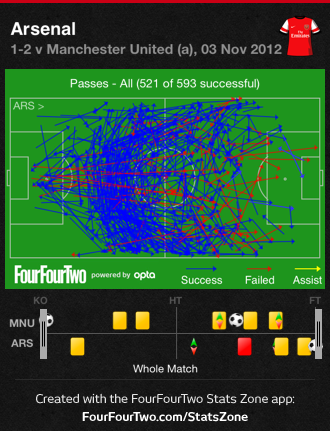 With Arteta being marked, Wenger tried to alleviate that by having Cazorla play deeper in the first half, and thus get on the ball, but too often in those deep positions, Arsenal's movement was too poor for Cazorla to start playing pretty possession football, or create chances. One moment in the first half summed this up perfectly; Cazorla got the ball after good play from Aaron Ramsey, and had Podolski and Giroud ahead of him. Giroud made a run to the right, creating space for Podolski to dart into, but the German failed to, and Arsenal lost the ball. 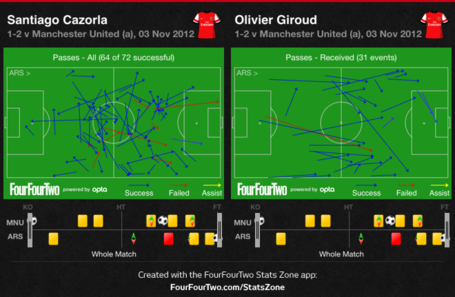 Consequently, Giroud tried coming deep to link up with his midfield, but the movement beyond him was effectively non-existent, making United's defensive job easy. I'm not sure if Arsenal would've done better if they had Robin van Persie; they might've done, considering his movement is so good, but given Giroud's lack of service, it's tempting to say they wouldn't have. One would like to say that things will get better, but on the evidence of this season, I'm not sure if it's feasible to do so, and here are some reasons why:

Manchester United defeat Arsenal by a final of 2-1