Arsenal FC and Emirates Air continue their long-standing partnership, extending their shirt and stadium sponsorship rights while helping the club solve one of their revenue headaches

If you buy something from an SB Nation link, Vox Media may earn a commission. See our ethics statement.

The source of practically every Arsenal supporter's headaches when it comes to the club has revolved around money. Where money is coming in, how much money we have on the book, how it's being spent and so on. The news out of Ashburton Grove today should go a long way towards relieving those worries.

Plenty remains to be seen, but one of the bigger models of squad and financial management of the club has been funding player sales with player purchases, as well as using player sales to help offset operating costs (as was the case in the last set of financial statements). In our last reporting period, we showed an operating profit loss of £18.5 million pounds, which was offset with a profit on player sales of £65.5 million. In essence, we helped our inefficient financial model out by selling players; many could say that we had to sell Cesc Fabregas, Samir Nasri and Gael Clichy to make up for lack of financial efficiency (like, for instance, out-of-control wage structure).

Also, looking at the top 20 clubs in the last Deloitte's Money League, only five clubs had a worse stream of commercial revenues than Arsenal, yet Arsenal had the fifth-highest total turnover in all of Europe. 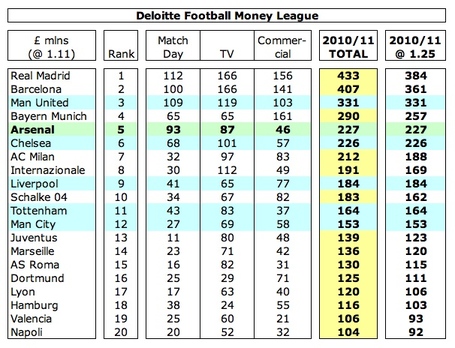 One area that, theoretically, should stop this exodus of players is increased revenues. Going back to the figures above, we're going to see an increase of £24.5 million in revenue in just this deal alone. Remember the club is rumored to be negotiating with adidas and Nike for their new kit sponsorship, which given the numbers being thrown out thus far, would double their kit revenue on a yearly basis. And then there's the massive increase in marketing personnel at the club with the sole intent on securing additional secondary deals, and the club's commitment to expanding their brand in one of the most fertile markets in the world.

This shouldn't be considered the tip of the iceberg, given the percentage of increase in revenue with this extension, but things are looking up regarding the club's revenue constraints and we should all start to look closely at how the club conducts business, both in the transfer market as well as contract extensions for current players.