After a slow start, the Frenchman has 5 goals in his last 6 games, along with several assists, and is starting to look every part the player Arsene Wenger bought in the close season.

Share All sharing options for: Olivier Giroud is starting to repay Arsenal's faith

On October 27th, Arsenal's resident dunderhead unfavourably compared new signing Olivier Giroud with Marouane Chamakh. Less than a month later, the club's chief flip-flopper had this to say about Giroud:

While Piers Morgan might not be the best man to gauge the real mood of Arsenal fans, it is still remarkable how quickly Giroud has turned even the most flip-floppingly of people in little over a month. Of course, the perfect retort to Piers Morgan is that Giroud was never going to be the new Chamakh because the the two are entirely different players, and had he actually watched the games and not bleated his ill-informed opinions on Twitter, he would've noticed how, unlike Chamakh, Giroud consistently got into positions to score. Unlike Gervinho, who perhaps made Arsenal more fluid among the front three, but less direct, Giroud has consistently worked opposition centre backs, having won 53% of his aerial duels, compared to Robin van Persie having won 29% last season. 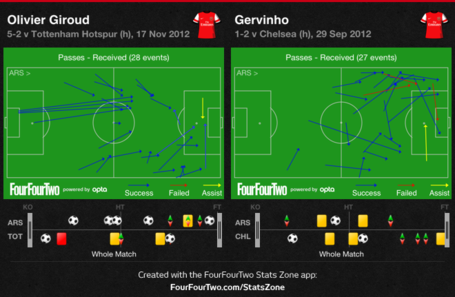 At the beginning of the season, though, the difference between Gervinho and Giroud seemed to hurt the Frenchman, with his headed flick-ons not always finding teammates. The return of Theo Walcott, though, and his diagonal runs in behind saw a change of Giroud's fortunes: The two combined very well against Reading, in the Capital One Cup, and again against Fulham, where Walcott assisted Giroud twice, and Giroud dropped off to a widish position on multiple occasions, flicking the ball on for Walcott to drive into the middle.

There were already signs that Giroud could replicate some of Robin van Persie's best movement; against Montpellier, in the Champions League, he dovetailed exceptionally well with Lukas Podolski, while chances missed against Sunderland and Chelsea came after great off-the-ball movement. When he comes deep to win headers, he creates space for others to run into. A perfect example of this is Arsenal's 4th goal against Tottenham last weekend: Giroud won the header, Walcott, who had come close to Giroud to receive his flick on, played the ball through for Podolski, who crossed for Cazorla, who had made the run into the space Giroud had vacated. In that way, Giroud is somewhat similar to a false 9, but, Arsene Wenger would prefer he play higher up the pitch:

Giroud is good when he plays completely on the offside line. Sometimes when he doesn't get the ball enough he wants to come deep. That is not his game. When he is a target man and uses his link-up play, he is fantastic because he can win in the air, he can score with his feet and can be a complete striker. He still has some work to do, but he is getting better.

In many ways, that makes sense. Giroud doesn't have the ability that Robin van Persie has in playing through passes, but he is excellent at holding the ball up and linking with midfielders and wide players making runs in behind. By playing on the offside line, he can stretch play and create space for the wide players and midfielders to drive into. With better off the ball movement from Arsenal's midfielders and wide players, he's acting kind of like a false 9; creating space to drive into after dropping deep. And, unlike Chamakh, after dropping deep and winning the ball, Giroud makes runs into good positions in the box. Against Schalke, he played the ball to Lukas Podolski, and then made a run into the 6-yard box. He did the same for Cazorla's goal; behind Cazorla was Giroud, ready to score if the ball came back to him. And, as ever, his movement in the box is very good. He's gotten in front of defenders and scored poacher-esque goals, and he's scored classic #9 goals.

Arsene Wenger says Giroud is on the way to being a complete striker, and, in many ways, he could be the most complete striker Arsenal have ever had. With his physicality and height, he always offers a plan B, even when the team is struggling, as evidenced by the amount of long punts he's winning. The way he's beginning to link up with Podolski and Walcott is promising, as is the fact that of his 7 goals, 4 have been headers, and 3 have been scored with his feet. Arsene Wenger is often criticised for not having a plan B, but with Giroud, Arsenal have a striker who is both perfect for their plan A and plan B; his movement and combination play is good enough for Arsenal's passing game, while his aerial play is good enough to offer a real plan B goal threat. And, because of that, he's contributed to Arsenal getting out of their patchy spell; even when he wasn't that great, as he was on Wednesday, he still assisted both goals, with the first, a knockdown, giving Arsenal more confidence to create chances.