Another challenge, another test passed by Arsenal. After defeat to Chelsea, there were many who were concerned that Sam Allardyce's West Ham could deliver a knockout blow, especially as they could expose Arsenal's new weakness on set pieces (I say new because after defeat to Blackburn last season, Arsenal did not concede a single league goal from a corner or non free-kick goal). And, Sam Allardyce usually has his teams set out in a way to frustrate Arsenal's passing; by pressing, and forcing them to go wide, similar to the way Chelsea and Manchester City tried to defend against Arsenal. And, as against Manchester City, Arsenal seized control of the midfield in the first half, and pressed higher up the pitch, winning the ball back quickly. And, once they got the ball in the midfield, they passed the ball quickly and purposefully, and played at a very high tempo; West Ham's goal was totally against the run of play. 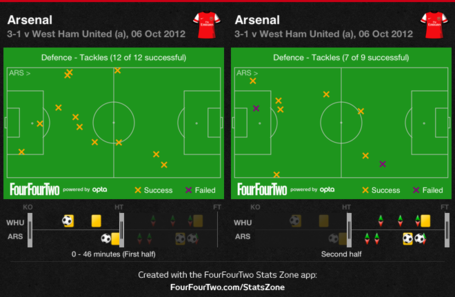 West Ham, though, played at a higher, and more direct tempo in the second half, and forced Arsenal to drop deeper. The defence, though, as Per Mertesacker says, remained strong, and did better against Carroll in the second half, despite the concession of two excellent chances to Kevin Nolan. Both came, though, when Arsenal's shape was disoriented, which, once again, emphasises the need for Arsenal to work on it; At times, the midfield pushed up too far ahead of the Arsenal defence, and that's how Nolan's chance to equalise after Theo Walcott put Arsenal ahead came about. 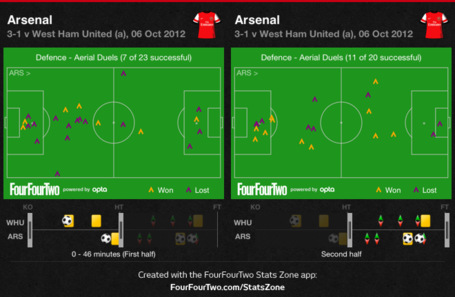 Despite playing higher up the pitch, though, West Ham were unable to stop Mikel Arteta, and thus, were unable to stop Arsenal. The Spaniard played 106 successful passes (out of 111), and was the chief provider to Santi Cazorla, who was able to drift laterally into space, and give Arsenal a creative outlet, even as West Ham forced Arsenal onto the back foot in the second half. Arteta was also the co-chief provider for Lukas Podolski, on the left (as was Aaron Ramsey), and for Carl Jenkinson, attacking on the right hand side. Arteta's positioning was also key here; sitting in front of Per Mertesacker and Thomas Vermaelen, he was able to win the second ball and allow for both of Arsenal's fullbacks to get forward, and increase the width of attack. Both Jenkinson and Gibbs had chances to create goals, though the crossing of both was of a lesser quality than we had come to expect. 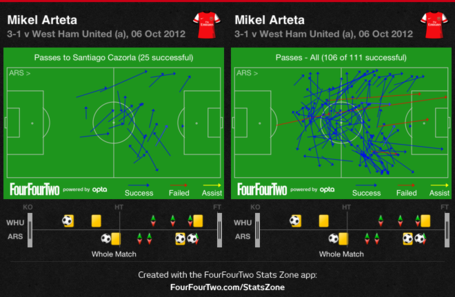 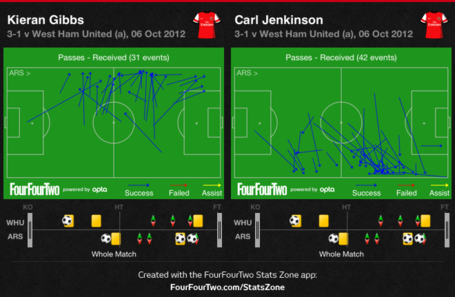 You may note above that Kieran Gibbs didn't get as forward as he usually does, and although he came off early in the second half, it was also because Lukas Podolski played wider than he has thus far for Arsenal. He still came inside on occasion, but, having gone missing against Manchester City and Chelsea, Podolski was able to influence this game by staying wide and providing dangerous cutbacks; cutbacks that he has perfected while playing for Germany. Podolski assisted Olivier Giroud's goal, and was the chief creator for Arsenal on the evening, creating 6 goal-scoring chances, all from cutbacks. 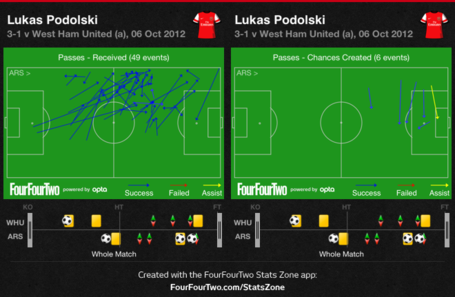 Aaron Ramsey had an excellent game, and the box to box role seems to suit him well. It allows him to use his excellent industry, and make good off-the-ball runs, as well as show off his range of passing. With Mikel Arteta holding, Ramsey was able to join in the attack and supplement Arsenal's attacking players all across the pitch to create overlaps; he showed up on the right wing, on the left wing, and with Santi Cazorla in the attacking midfield areas. With less pressure on him this season, he's starting to show the form that saw him emerge as one of Arsenal's outstanding prospects in 2009/10. 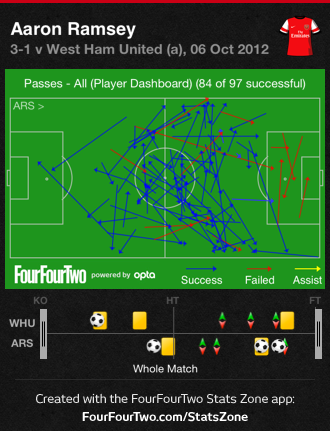 He would've been disappointed on the goal that Arsenal conceded, especially as he was responsible for Mohamed Diame getting into the Arsenal penalty area. Perhaps, though, Arsenal should've covered better, and therein lies the problem with the double banks of four. When Gervinho doesn't cover McCartney, it messes up Ramsey's positioning. There's too much space, though, already, once Carl Jenkinson stays wide with Matt Jarvis; Jenkinson should be narrower, and Gervinho should be deeper, in line with Ramsey, and stationed in a wide position where Jenkinson was. 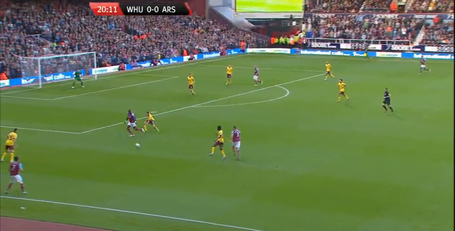 Gervinho should be wider, covering Jarvis, with Jenkinson narrower, able to help Ramsey against Diame and McCartney, who Gervinho lets go. There's too much space in behind, and once Ramsey is beaten, it's tough for Arsenal to stop Diame without letting Carroll get free.

Overall, it was a good performance by Arsenal, and they fully deserved the three points. They were able to wrestle control of the midfield in the first half, and even as Arsenal were pushed back by a more direct and purposeful West Ham in the second half, they showed defensive resolve and were good on the break; Theo Walcott stretched play, and showed the type of run and finish that makes one think he should stay on the right-wing, as he's excellent at taking up vacated space. The importance of Cazorla and Arteta, though, showed once again. With Arteta's metronomic passing and Cazorla's movement, Arsenal were always able to threaten on the break, and, eventually, they made the breakthrough.