It wasn't a vintage performance by any means, but Arsenal got the job done against a resilient Olympiacos side.

Share All sharing options for: Arsenal 3-1 Olympiacos: Goals From Gervinho, Podolski and Ramsey Seal The Points

Arsenal are in sole possession of first place in Group B after they beat Olympiacos 3-1 and Schalke were held to a draw by Montpellier. It was hardly the most vintage of Arsenal performances in the Champions League, but it was just enough to break down a resilient Olympiacos side, who did well to contain Arsenal, and looked lively throughout the match.

The fact that Arsenal got so sloppy in the latter stages of the first half was surprising given the way they started. They played with a high tempo, and pressed Olympiacos hard to win the ball back in attacking areas, with Alex Oxlade-Chamberlain in particular giving Jose Holebas a torrid time at left back. Most of Arsenal's play was slanted towards the right, with Santi Cazorla combining well with Oxlade-Chamberlain and the once-again excellent Carl Jenkinson, but Kieran Gibbs was always an outlet, and from a free kick he won, Santi Cazorla's shot was tipped over.

Cazorla, though, was finding it hard to get free from his marker, Dimitris Siovas, and Arsenal's creative play stuttered in the final third. Olympiacos began to become more confident, and started playing more attacking football, leaving Arsenal in two minds; do they press the ball, or drop deep? From that indecision, Francis Coquelin let Machado run into the midfield unmarked, and the midfielder shoveled a cross over the bar when it was easier to score.

That seemed to wake Arsenal up a bit, and when Cazorla produced some skill to get away from Siovas on the left touchline, Arsenal were away. He found Podolski, who crossed to the edge of the box, where Gervinho and Mikel Arteta were. Eventually, they sorted out who should take the ball, and it was Gervinho who made a little space and then hit a shot across the keeper from the edge of the box, to make it 1-0 to Arsenal.

Arsenal, though, got sloppy; Thomas Vermaelen gave the ball straight to David Fuster in front of the penalty box, and Arsenal never cleared the ball; Jenkinson was in two minds whether to close down Greco or go with the run; eventually, he did neither, and Greco had too much time to cross for Mitroglou, who got between Koscielny and Vermaelen to head Olympiacos level.

Steve Bould must have yelled a bit at Arsenal during halftime, because they came out of the gates looking a lot better. Kieran Gibbs won the ball on the edge of the box and cutback for Santi Cazorla, who inexplicably shot wide. The goal was coming though, and a one-two between Cazorla and Gervinho set the latter free, and, on the second attempt, his cutback found Lukas Podolski who hit a hard shot at goal that went through the goalkeeper.

Arsenal, though, again stopped pressing, and looked nervous. The problem with that is that the two ways they've defended thus far are at far extremes; they either press really hard or drop too deep, and that creates too much space in the midfield, as the wide players don't come back far enough if they're unsure of the defensive strategy. That is why Carl Jenkinson was screaming at his back four to push up; there was far too much space in the middle (Jenks for Captain). To add to the confusion, Thomas Vermaelen kept bursting forward, and was almost on the end of a Theo Walcott cutback.

Olivier Giroud and Aaron Ramsey also came on, and the two were involved in a great chance; Ramsey backheeled for Cazorla, who cutback for Giroud, who's fierce shot hit Siovas in the head, with the defender not knowing much about it. There was more space to be exploited, though, and Arsenal finally did exploit it in the final minutes; Giroud's flicked header set Ramsey away, and the Welshman dinked over the keeper to give Arsenal a third goal, and seal the points.

The below is an approximation of where Arsenal won the ball back; by no means is it totally accurate, but they tended to win the ball back the most when they pressed the ball; rarely did they cleanly win the ball and find a teammate in their own defensive third. Food for thought for Steve Bould and Arsene Wenger. 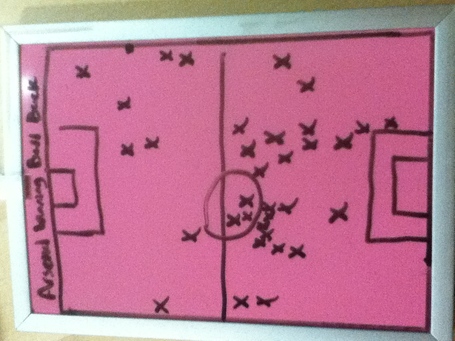