Arsenal once again struggled against a disciplined and resolute QPR, but Andrei Arshavin's cross provided the breakthrough for Arsenal.

Share All sharing options for: Tactics: Arshavin's Cross The Breakthrough

When this site wrote about Andrei Arshavin exactly a month ago, we mentioned the possibility of Arshavin spelling Santi Cazorla. He hasn't, as of yet, but, he did provide the decisive pass off the bench, as we speculated he might. In an Arsenal career now limited to desperate rescue missions, it's easier to remember Arshavin for these decisive moments because they invariably lead to three points. There was the cross for Thierry Henry's 229th Arsenal goal against Sunderland last February, and, similarly, his cross yesterday for Olivier Giroud, whose header was superbly saved by Julio Cesar, led to Mikel Arteta forcing the ball home from 2 yards. Yet, the concerning matter is that had Gervinho not been stretchered off with what looks to be a serious ankle injury, Arshavin might not have come on.

That, in of itself, is odd; Arsene Wenger acknowledged that having Theo Walcott and Gervinho on at the same time leaves the side unbalanced, so it is a bit confusing why he brought Gervinho on, after correctly bringing on Theo Walcott for some much needed right sided width. The width was needed because, although Aaron Ramsey battled and worked very hard down the right, his natural inclination is still to come inside. With Andre Santos not pushing forward on the left, it leaves Arsenal very narrow, as they were yesterday. With Santi Cazorla, understandably, having played all but 6 minutes in a new league, slightly below par, Arsenal were stifled through the middle. 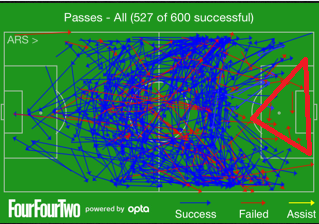 The one player who was seemingly able to create from the middle, and change the tempo of the game was the returning Jack Wilshere. Playing in a box to box role in Arsenal's double pivot, he energised the Arsenal midfield, pressing in the defensive phase and was able to up the tempo by carrying the ball through the midfield, something Arsenal have missed without him and Abou Diaby. His passing was sharp and crisp, with every pass opening up space. Considering that it was his first match in 17 months, it's exciting to think about what impact Wilshere can have. 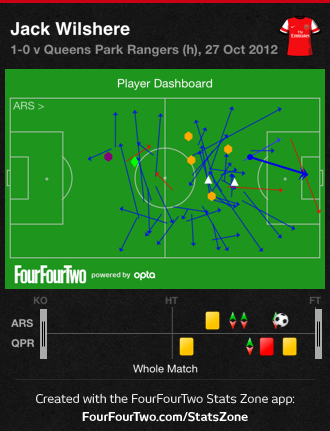 Arsenal, though, were still too narrow. The return of Bacary Sagna, and his quicker style of passing helped somewhat, and displayed some promise, but the left side of Andre Santos and Lukas Podolski once again left a lot to be desired. Santos defended a little bit better in the second half, but his movement in conjunction with Podolski once again was too narrow and cluttered Arsenal's attack, and, thusly, almost all of Podolski's passes to Santos were backwards and square. One moment in the second half summed it up; Santos was wide of Podolski and Cazorla, and could've continued his run, but instead went to the inside as the ball switched to the right hand side, instead of keeping the width. Arsenal cannot have Kieran Gibbs back too soon. 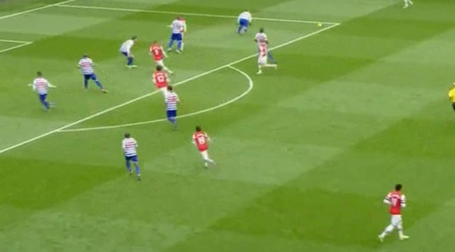 Eventually, though, bringing on Theo Walcott and Andrei Arshavin enabled Arsenal to use the width. Walcott stretched the play on the right hand side, and created the chance for Santi Cazorla, by playing a deep cross for Olivier Giroud, who's run opened up the space for Cazorla. The introduction of Walcott seemed to force QPR back, and open up some more space on the edge of the Arsenal penalty box, allowing Arsenal to better spread the ball into the wide areas. Arsenal's crossing, too, was more accurate; Walcott and Sagna, even if they didn't create direct chances, created chances through knockdowns from Giroud, while Arshavin's cross was decisive. Unlike against Norwich, Arsenal were able to utilise the wide areas, and while it wasn't a convincing performance, it was better than the last two games against Norwich and Schalke. There were more shots on target, which reflects that Arsenal were able to create better chances, most from the wide areas. Before the match, I wrote about Arsenal needing balance, and, through Arshavin and Walcott, they got it. 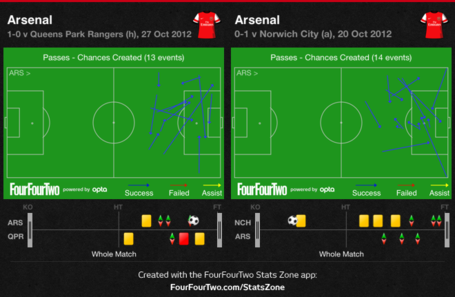