Arsenal Need To Rediscover Their Balance

Arsenal need to become balanced again if they are to return to good form, and Arsene Wenger needs to make tactical shifts to make this happen.

Share All sharing options for: Arsenal Need To Rediscover Their Balance

When there's a team that is as highly-strung as Arsenal, little, minute details can throw off the Gunners' rhythm and make them look hapless in attack, as has happened in the last two games. The fact that both teams, Norwich and Schalke, defended somewhat deeper than Arsenal prefer certainly didn't help, but Arsenal should be used to teams doing this by now; they need to be able to find solutions to this problem.

The problem lies in the nature of the passing; in Arsenal's better games, they've been dynamic, but patient, whereas in the last two, they've had a very slow tempo, combined with a lack of care in possession, leading to an excessive amount of giveaways. Part of this lies in the man-marking of Santi Cazorla, forcing him to be less creative in his passing, and Arsenal, without creative players in the wide areas (unlike last season, where Yossi Benayoun was invaluable) have suffered for it. Furthermore, Cazorla has been unable to play his killer combination passes down the left-hand side in recent matches, where Arsenal's play has been very limited in the absence of Kieran Gibbs. Lukas Podolski, in particular, has been quiet; with Gibbs out, Podolski has been unable to play as inside without Arsenal getting so congested, and he's not well suited to playing as a winger, because he can't play quick one-twos, and he's not a dribbler.

Andre Santos, unlike Gibbs, moves up the field in a narrow fashion; he rarely plays out wide, which helped Arsenal last year, because he added another ball-playing creator. But Arsenal are a different team this season, and Gibbs' width has been vital to the combination play between Cazorla, Podolski and Gibbs, and one reason why Arsenal's left was their more dangerous side. With Santos in, though, their width has become even narrower than usual, which is one reason why Arsenal were so pedestrian against Norwich City and Schalke. Interestingly, the quick combinations on the right hand side between Carl Jenkinson and the right winger, be it Gervinho or Aaron Ramsey, also disappeared, and Jenkinson got forward a lot less then he had done in previous matches. 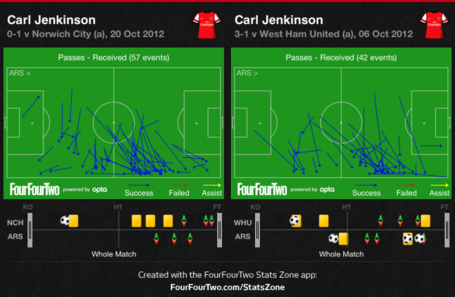 Jenkinson may be staying back because he's worried about Santos not recovering from attacking forays quick enough, and thus worried about Arsenal not having enough bodies back. That is a legitimate concern, and it may lead to Arteta being switched to the left of Arsenal's midfield pivot so he can cover for Santos. It might also help if Arsenal's defensive shape becomes unmuddled; against Schalke, Santos had a poor game, but he was also left with numerous 2 v 1 situations because Podolski didn't track back well enough. Cazorla came over, at times, but this limited his effectiveness attacking. A switch to a more proactive pressing game may be more prudent, and may help Arsenal up the tempo of their own game.

Another solution would be to not play Gervinho on the right; with Podolski playing inside, Arsenal need someone to stretch the width, like Alex Oxlade-Chamberlain or Theo Walcott. Without Kieran Gibbs, Arsenal don't have any width on the left hand side, and might do better playing Gervinho there, who has the ability to stretch play on the left, but oddly, can't seem to do it well on the right hand side. Aaron Ramsey played on the right on Wednesday and showed some creativity early on, and Arsenal do need more creativity, which may lead to Santi Cazorla playing on the right when Jack Wilshere or Tomas Rosicky return. There, Cazorla can combine with Carl Jenkinson or Bacary Sagna, and also offer more creativity than the direct play of either Gervinho or Lukas Podolski on the left hand side.

Without Gibbs, though, who is increasingly becoming crucial to this Arsenal team, Arsene Wenger has to sort out the balance problem quickly. The problem is, as ever, a lack of width, making this Arsenal side unbalanced; an easy solution would be to push Gervinho to the left hand side, and play either Lukas Podolski or Olivier Giroud through the middle to make runs in behind, something that Gervinho rarely does when he plays centre-forward. It's these sorts of changes that managers must make when teams aren't playing well, and Wenger usually doesn't make them, trusting in his players to find their own solution. This time, though, he must be proactive and ruthless.