Located to the southeast of Castle Hill in the city of Norwich, Carrow Road sits a block north of the banks of River Wensum and is unique in that it also houses a Holiday Inn in the northeast corner of the stadium. While this is the club's third ground in its existence, the Canaries are celebrating their 77th season at Carrow Road. 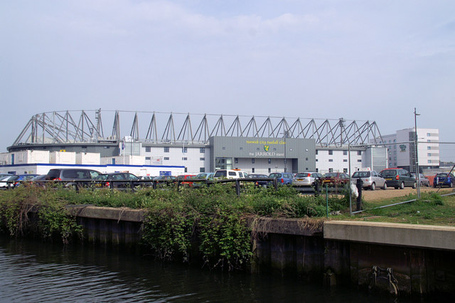 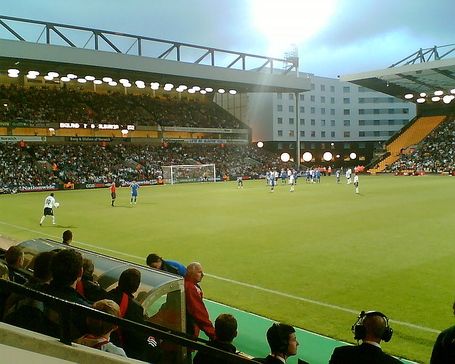 via upload.wikimedia.org (the Holiday Inn is in the corner between the two stands in this photo)

History: The club spent their first seven years at Newmarket Road until moving to a former quarry on Rosary Road in Norwich in 1908 that was later nicknamed "The Nest", a play on the club's nickname. Before their new stadium could be, well, a functioning stadium, copious tons of dirt had to be moved and sculpted into something resembling a flat pitch with one end featuring a concrete wall fronting a cliff. Years of use at this makeshift site later saw the FA deem it unsuitable for use thanks to its the relatively-small pitch and the fact that a corner of the pitch sank nearly 30 feet (being, you know, on the site of a former quarry). This incident is the proverbial "straw that broke the canaries' wings" and, with the new season just weeks away in 1935, the club found a new location on Carrow Road and have taken up residence at this site ever since.

Carrow Road has been transformed quite a few times since its opening in 1935, and currently the oldest stand at the ground is only 32 years old (the two-tiered Norwich and Petersborough Stand that butts up a mere couple hundred feet from the river banks). The ground has seen its fair share of drama both on and off the pitch; in October 1984, a fire took out a portion of the City Stand (now named Geoffrey Watling City Stand after its rebuild). 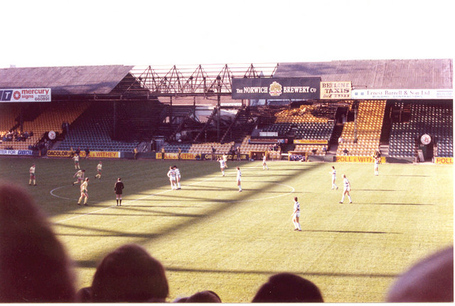 Current: The stadium's capacity is 27,220, which makes it the 7th smallest ground in the EPL this season. Below are the stands, which are all adorned with roofs that cover every seat: 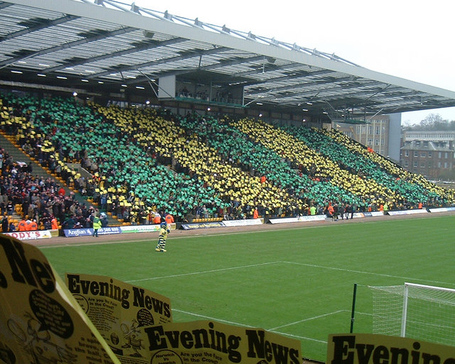 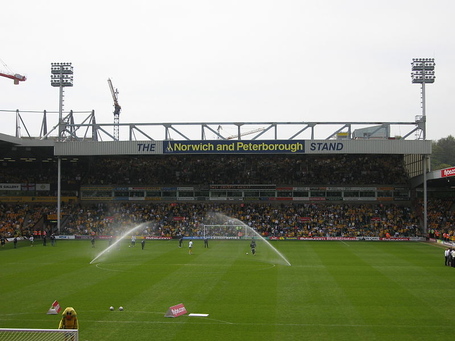 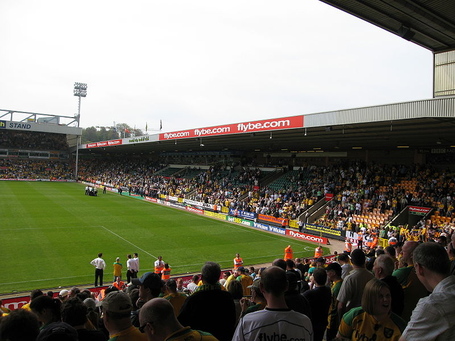 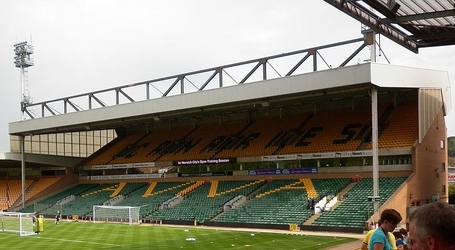 Away Supporters: Up to 2,500 tickets are allotted to away supporters for each match at Carrow Road, and they are housed in the Jarrold Stand, on the end that's up against the on-site Holiday Inn. What's unique about this is that Carrow Road is one of the few grounds that keeps the away supporters on a side of the pitch as opposed to the customary stadium bank seating found throughout the country.

Getting to Carrow Road: OK, before I go on, I think I should clarify that this section is for the typical visitor to not only the beautiful city of Norwich, but for the typical TSF reader; while we have readership in the UK, a majority of our members are located outside of England and thus will probably be arriving at the grounds much differently than the locals. However, if you are a local and want to clarify anything here, please feel free to do so while keeping the above-disclaimer in mind.

This is a fairly easy ground to get to if you care to drive a vehicle. There ample parking at Norwich County Hall, which is across the river from the ground and a short walk away. If you so desire to take the train, the Norwich train station is a short walk to the northwest of Carrow Road. Either way, arriving and departing from the grounds is said to be less of a headache than most other stadiums in the EPL.