Arsenal have played ten competitive matches so far this year; how have the players stacked up so far?

Share All sharing options for: Arsenal minutes, goals, and assists after ten matches

Many stats in football, as we know, don't really do a great job of telling a story about the sport yet. Goals and assists, though, are the object of the game, and are of some interest, even if they cannot tell us everything about the objective quality of player x or player y. With that in mind, here's a little stat hit after Arsenal's ten competitive matches so far this year, presented mainly as a point of information: 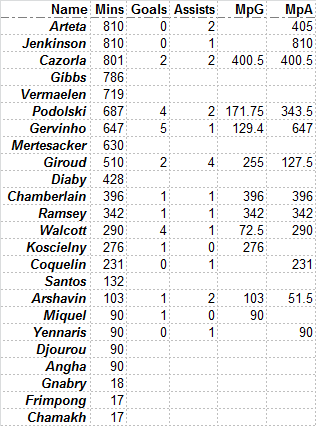 A couple of things to note: these stats are from all of the competitions, so the quality of opponent has not always been Premier League-caliber (Coventry City). With that in mind, the above stats do suggest or underscore a couple of things:

1) Theo Walcott is a good finisher.
2) Olivier Giroud, a source of frustration for his non-scoring ways to many so far this year, has, in fact, been assisting a lot, and on some key goals, too.
3) Santi Cazorla is very good; don't let the minutes per stats deceive you.*

*(You wouldn't, I know, and you would never think he's bad. Jokes!)

Anyway, just some fun numbers for everyone's edification. Or maybe just mine.