Share All sharing options for: 3 Points On Arsenal's Midfield

Editor: This article was planned before news of Jack Wilshere's setback broke.

In recent weeks, Arsenal's midfield has been one of the more overlooked reasons for Arsenal's pointless January. Losing Mikel Arteta was a major blow, and highlighted a severe weakness: Without Areta, Arsenal have no player to drop deep and help Alex Song, nor to help Arsenal when they're under pressure. This has 3 effects, detailed below.

Arsenal's full back crisis has been a major problem, attacking wise, and also, of course, defensively. Not having a solid midfield base exacerbated that problem. When Arsenal morph into a double pivot, it not only helps Arsenal become more solid in the middle, but it also helps Arsenal defending their flanks. Mikel Arteta has often appeared in support of Andre Santos, or other Arsenal left backs, while Alex Song has supported Arsenal's right back. Arteta's replacements, though, in Tomas Rosicky and Yossi Benayoun, do not share his defensive nous. 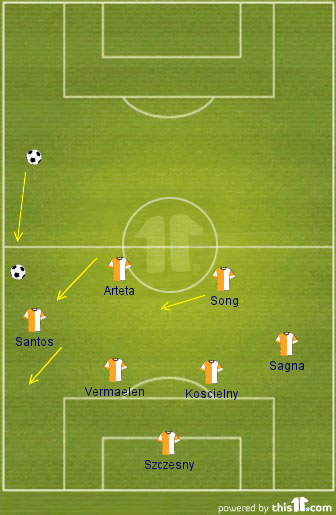 As the picture above shows, when Arsenal have a solid double pivot, an attack down a flank sees the near side midfielder, in this case Arteta, drop wider, with Song moving inside. Neither of Benayoun or Rosicky, though, have formed an effective double pivot, and Arsenal have suffered further in the full back area because of it.

Arsenal's possession has also suffered in recent matches, having been less than 50% in all 3 defeats. Relatedly, they have shown a disturbing inability to dealing with high pressure, becoming susceptible to losing the ball in the midfield. Retaining possession under pressure is important because it opens up space elsewhere, away from pressure, and it also allows for control of the midfield. Arsenal haven't been able to control the midfield, or retain possession under pressure largely because of the absence of Mikel Arteta. Tomas Rosicky and Yossi Benayoun are both very good passers of the ball, but they lack the awareness that Arteta has, and it shows in the success pressuring the midfield has had for Fulham, Swansea and Manchester United. Because of those teams' pressure, Arsenal often had to resort to hitting long balls to Robin van Persie, which didn't help relieve pressure because the aerial game is not van Persie's forte, and, as a result, it gave the ball straight back to the opposition, allowing them to attack Arsenal again.

As of late, the attacking contributions of Alex Song have been almost non-existent; his last assist was for Thierry Henry in the Cup, the last time Arsenal's first choice midfield was fit and fresh. Since then, he often hasn't gotten forward during Arsenal's build up. This largely stems from, again, not having Arteta. By dropping deep, Arteta enables better rotation of Arsenal's midfield, and also provides a sold defensive screen, something that Rosicky and Benayoun don't do. Furthermore, with Arsenal under pressure, Song is forced deeper, and, without the double pivot, is often the sole defensive midfielder, and thus gets overloaded. Song has often been Arsenal's only constant through ball provider, and is 12th in Europe in through balls per game. In recent weeks, though, he has been unable to provide these sorts of passes to unlock opposition defences, and Arsenal's attack has suffered for it. Because of the lack of full backs, Arsenal have been forced to attack more centrally in recent weeks, but have become unstuck against dogged defenses, and pressure. Song would help greatly with the former, and would help more with the latter because of his ability to break from midfield, but, he's been unable to. Last week, Arsenal looked somewhat lacking in ideas when in possession through the middle, and didn't attempt a single through ball. The defensive issues are worrying, but, Arsenal are supposed to be a team that scores lots of goals; in recent weeks, they haven't nearly creative enough to do so.

In the good old times of blood and thunder football, control of the midfield wasn't always valued, but Brian Clough was one of the first managers in England to value the ability of a midfielder that can hold possession in the middle, and help gain control of it. He recognised that a side must have balance in the midfield, and thus, bought players like Willie Carlin and John McGovern, despite their apparent lack of physical skills. Both, however, fitted the side well. Carlin broke up play, while McGovern, despite missing a muscle in his back, was a superb passer of the ball. In recent weeks, Arsenal have lacked balance in the midfield. Mikel Arteta returning will help things greatly, but without him, they have a tendency to become broken, and susceptible to pressure, and often lose the midfield battle. Perhaps like Clough, Arsene Wenger has to look to the transfer window to secure a midfielder. These sorts of players have never gained the recognition, either of fans, or economically (It was 1970 until a midfielder broke the British transfer record, and that midfielder, Martin Peters, was most certainly an attacking player), that their more flashy and creative midfield partners have, but they're just as important. Without them, sides become broken.