Arsenal Are Missing Their Fullback Thrust

Share All sharing options for: Arsenal Are Missing Their Fullback Thrust

It is often said that numbers don't lie, and these numbers are quite frank. Since Andre Santos went off injured against Olympiakos and deprived Arsenal of their last natural full back, Arsenal have played 6 league games, and have scored exactly 6 goals,while conceding 5. This has coincided with Theo Walcott and Gervinho losing form, though there are also other mitigating factors, such as Walcott's illness. Arsenal, though, have missed the attacking support Santos, and to a lesser extent Bacary Sagna, have provided. Arsenal were able to cope with Sagna; losing both, however, has been very problematic.

In the past, both Sagna and former left back Gael Clichy were criticised for their poor crosses and low numbers of assists; while that was undoubtedly true of Clichy, it was harsh on Sagna, and no such criticism can be labeled at Santos, who has already matched Clichy's career goal total in a tenth of the games.

After the loss of Cesc Fabregas and Samir Nasri, Arsenal have had to change the way they play. Nasri is not a huge loss, and in fact, replacing him with Gervinho actually benefitted Arsenal in the long run. Losing Fabregas, though, is a different story. There are only 4 or 5 really superb playmakers in the world, and Fabregas is one of them. 2 of the other ones are his teammates, a third is at Real Madrid, and the fourth is avilable for £1bn (Mario Goetze). In other words, Fabregas was irreplaceable. Like the Oakland A's in 2002, he can be replaced by an aggregate of players and a change of system, something that has been done by creating a hybrid between Arsene Wenger's Invincible side and the more possessive football team of the last 6 years. This has seen the wide forwards, almost always Gervinho and Theo Walcott, take on a bigger creative role, as Aaron Ramsey has yet to reach his predecessor's creative heights. This has led Arsenal to become more direct, and quicker on counter attacks; they've scored the most goals on the counter attack in the Premier League this season. The outlay from the wide areas was, at the beginning of the season, terrific. Arsenal suddenly looked like a side that could create chances from every angle, and got behind defensive teams more than they did last season. Then, however, Kieran Gibbs joined Bacary Sagna on the injury list. Andre Santos, though, looked even better; calm under pressure, with some goal scoring feats too. Carl Jenkinson on the other side looked like a superb crosser of the ball. Jenkinson, though, fractured his back; Santos ruptured his ankle ligaments, and Arsenal started playing 4 centre backs. The goals dried up.

There are few sides that play 4 centre backs anymore. Stoke City are one of them; Tony Pulis often plays Marc Wilson, a centre back, at left back and Andy Wilkinson or Jonathan Woodgate, both centre backs, at right back. Stoke's fullbacks, though, are not expected to provide support and go forward; indeed, their most attacking fullback, Ryan Shotton, plays right wing. Similarly, in the 2010 World Cup, Diego Maradona was disdainful of the idea of playing attacking fullbacks. He didn't want them to cross the halfway line, famously stating "I have wingers for that". He later relented somewhat, and played Jonas Gutierrez at right back, but in the knockout round, he played Nicolas Otamendi at right back, and Argentina looked a very broken side, lacking fluidity and continuity. That last characteristic could be labelled towards Arsenal in their last few fixtures, as Thomas Vermaelen and Johan Djourou, both fine defensively (Vermaelen better than Djourou) haven't been, understandably, as attacking as Arsenal's regular fullbacks.

The attacking aspect is the most under appreciated part of a fullback. Many fullbacks have been questioned because of their lack of defensive ability; although defensive ability is very important, getting forward is also important for an attacking, goal scoring side. Arsenal in recent weeks have lacked fullbacks, and that has meant that the wingers, but in particular the player positioned on the left hand side, have struggled. Teams opposing Arsenal have been able to double up on the wide men. With Theo Walcott and Gervinho both right footed, they need overlapping runs from their fullbacks in order to take defending players away and create space as they cut in. On the right, overlapping fullbacks are nice, but both are comfortable with staying wider and getting to the byline; on the left, both cut in more towards the beginning of the penalty area. Neither Thomas Vermaelen nor Johan Djourou have made good overlapping runs; both prefer to drive through the middle, which doesn't give Arsenal support in wide areas, and tends to clog up an already congested middle third of the pitch (when these runs are made from central positions, it's more effective).

This is evidenced by the placement of successful take-ons in two recent fixtures, both against sides that packed the penalty area. One of them, home to Wolves, had no natural fullbacks, while the other fixture, against Wigan, had one, Andre Santos. Without fullbacks, they have become more like the Arsenal of last season, but without Cesc Fabregas, have lacked that extra creativity. 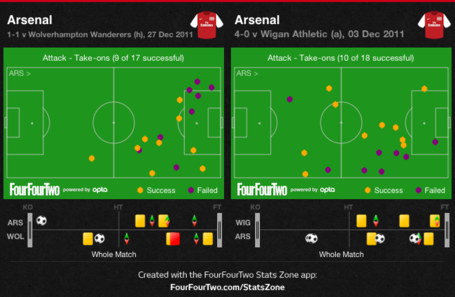 It's also interesting to note that with Yossi Benayoun on the right against Wolves, Arsenal won more dribbles than they did against Wigan.

Furthermore, of Arsenal's last 6 goals spoken of earlier, only 2 have involved wide players: the penalty against Aston Villa, where Walcott got in behind the Villa defence from a quick throw from Mikel Arteta, and Gervinho's opener against Wolves, which came from a counter attack. Against packed defenses, Arsenal have been more impotent, and have lacked penetration (side note: Why do so many terms in football have a sexual connotation?). They looked their best in the first half against Fulham, a match that featured the more marauding Francis Coquelin at left back, before he got inevitably injured.

Clearly, fullbacks are crucial for the way Arsenal play. With Bacary Sagna and Kieran Gibbs set to return, the problem should be alleviated, but with Gibbs' spotty injury record, Arsenal may be again in need of a left back. The right wide forward, typically Theo Walcott, can handle not having a fullback better than the left fullback, usually Gervinho, as Arsenal were quite creative with Johan Djourou or Laurent Koscielny at right back. With Vermaelen at left back, though, and his failure to make supporting runs beyond Gervinho, Arsenal haven't been able to break teams down as well from wide areas. It is imperative that Arsene Wenger solve this problem; either by dipping into the loan market (and this does not mean Wayne Bridge), or by using a player who is more likely to get forward at left back in the absence of Kieran Gibbs and Santos. It remains to be seen how Igansi Miquel does in his forward play; he hasn't started a game that has featured Gervinho, or Theo Walcott on the left yet. He has provided support in the few minutes that he has played, and it may be that with Arsenal's 4th left back this season, they could find the auxiliary attacking support they desperately need.