(Cue Introductory Theme) This weekend (tomorrow morning, in fact-ed), Arsenal take on Swansea looking for the first win of the season. Swansea have done quite well since coming up; they've conceded only 4 goals in the Premier League (all to Manchester City), thanks in part to super keeper Michel Vorm, and because they've maintained an impressive 61% possession, second in the Premier League. Their style of play has lead to several incorrect comparisons to Blackpool (many call Swansea "this year's Blackpool"), who came up and played attractive football last year. Unlike Blackpool, Swansea play many more square and backwards passes, as their possession style of football is also form a defensive style; after all, if the other side doesn't have the ball, they won't score unless they score a spectacular own goal.

Blackpool last year were wonderfully attacking and exciting, and loved to get the ball forward. As already stated, Swansea aren't as attacking as Blackpool; Swansea scored only the 8th most goals in the Championship last year, while Blackpool scored the 3rd most in 2009-10. Further evidence is the way that they play their passes, first in a table (stats courtesy of EPL Index). For reference, Arsenal's stats from last season are included.

Interestingly, Blackpool and Arsenal had roughly the same percentage of passes going forward, while Blackpool and Swansea have the same percentage going backwards and Arsenal and Swansea share the same amount of passes that are square. Without viewing where the passes are on the pitch though, that table doesn't give us that much useful data; it just sets the context for what those 3 teams are doing with the ball.

Where Swansea Are Passing

Luckily, thanks to Guardian Chalkboards and FourFourTwo's Statszone App, we can see exactly where Swansea are passing the ball through their first 3 games: 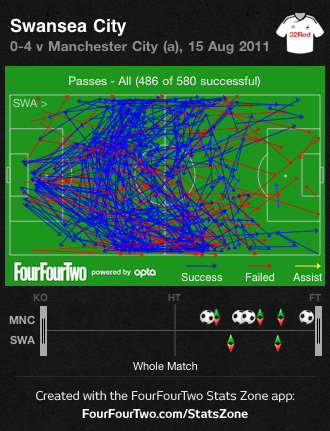 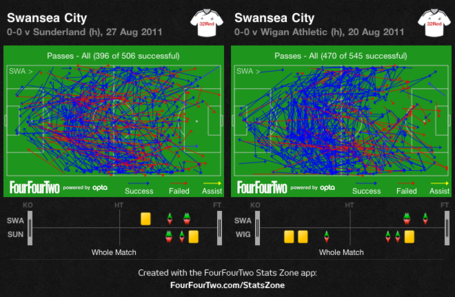 For context, here's Arsenal's passing in those same 3 games: 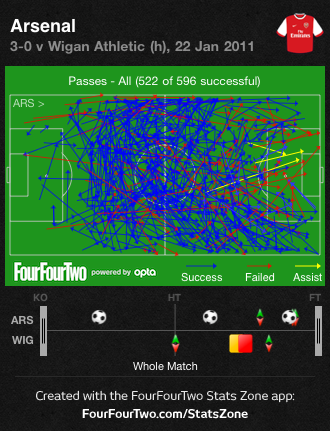 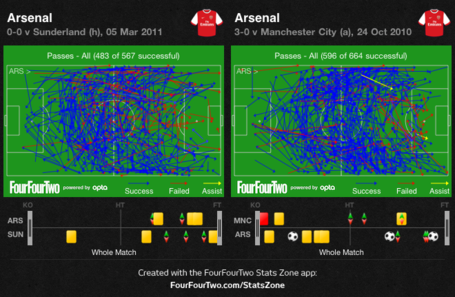 As you can see, Swansea's passes occur a lot more in the first and second third of the pitch than Arsenal's, who try to monopolise their possession in the attacking third of the pitch. That corresponds with the 5 players who make the most number of passes in the two teams; for Swansea, the first 3 are defenders (both centre backs), and the last 2 are their defensive midfielders. For Arsenal last year, Cesc Fabregas, Jack Wilshere, Alex Song and the two fullbacks are the top 5 passers, indicating a more attacking approach.

To disrupt Swansea's passing game, Arsenal must press Swansea up the pitch, especially their centre backs. So far this season, Arsenal have begun their pressing game only in their half of the pitch. Swansea would love nothing more than Arsenal to do that tomorrow, allowing them to take the sting out of the match and make the Arsenal fans restless. A return to the through marking system that they employed last year, where every player gets marked when space is squeezed, thus cutting off passing options. This system would work nicely for Arsenal, as Swansea's 4-2-3-1 would match up with Arsenal's 4-1-2-3. Frimpong's role, thus, is crucial. If he's not disciplined, he can let Swansea's midfield creator, either Wayne Routledge or Stephen Dobbie, get free.

A high tempo start, with pressing, concise, incisive passing and lots of midfield movement, especially with Arteta and Ramsey switching the role of link player, is exactly what Arsenal needs tomorrow, to restore badly needed confidence.