Finally, as the clock struck 11, Jim White gave us the welcome news that Arsenal were pushing through the papers necessary to secure the signature of Mikel Arteta. Shortly afterwords, both clubs announced the story, with the 29 year old switching for £10m.

Despite the fact that they look alike (I think that alleviates the pain), and are both Spanish, Mikel Arteta is not a direct replacement for Cesc Fabregas. There is perhaps no direct replacement in world football for Fabregas that's available (hello, Mario Götze), but together with Jack Wilshere, Arteta can help return Arsenal's creativity to the level it was before the departure of Cesc Fabregas.

So far this season, Arsene Wenger has changed the midfield from a 4-2-3-1 back to a 4-1-2-3, that worked so well in the 2009/10 season. That leaves the creating open to two advanced midfielders, rather than one, but also requires that the holder sit more, which is why playing 4-2-3-1 away from home may be advisable. The 4-3-3 allows for more fluidity for two main reasons: There is more than one main creator, and there is more space available if defenders follow Robin van Persie, because of the positioning of the midfielders. With Arteta and Wilshere not being as high as Fabregas, it means that the opposing midfield must push up their midfielders, to close space. That provides more space behind, that is taken by van Persie, who, ideally is followed by the centre backs who then leave open vast space behind the defensive line. That space can be run into by a midfield player or wide forward who is then unmarked in the box, a move that Arsenal perfected at the beginning of 2009/10, when they were scoring goals for fun. 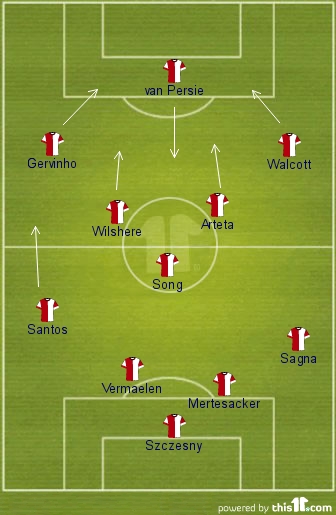 At Everton, Arteta was the main man, keeping everything ticking over before trying to play the final ball to Louis Saha or Tim Cahill. However, despite having 2 key passes per game last season (and 2.5 the year before), he does have a lack of throughballs (.2 per game), which means that he won't directly replace Cesc Fabregas. What he will do, however, is keep everything moving in the midfield; last season he completed an average of 50.8 passes per game at an excellent rate, 87%. He can spread play around to wide areas, have interplay with Alex Song and Jack Wilshere, and with Robin van Persie. He can also become more of a goal scorer than he was at Everton (penalties aside) by making late runs into the penalty area. FInally, he's a good crosser (completing 1.9 and 1.8 crosses per game respectively) and set piece taker, something that Arsenal have lacked for a long time.

This should lead to a more creative role for Jack Wilshere; indeed, like the 4-2-3-1 was made for Fabregas, the 4-1-2-3 may be made for Jack Wilshere. The England international is much happier playing from a deeper position, in what could be termed as a "box to box" role. When he plays higher up, he gets somewhat uncomfortable, as shown in last year's 0-0 draw with Sunderland. In a 4-1-2-3, Wilshere can create from deep and make the runs beyond Robin van Persie that have been discussed.

Finally, Aaron Ramsey will still play a crucial role. He showed in the 2009/10 season he can play in a deeper role, and he quite often likes to drop deep when he's playing behind the striker. While Ramsey's running isn't as dynamic as Jack Wilshere, his goal against Manchester United and against West Ham in the FA Cup two years ago showed that he can make the dynamic runs required. While Arsenal will miss the individual brilliance of Cesc Fabregas, buying Mikel Arteta can get the best creative play out of Jack Wilshere, and ensure that Arsenal can retain maximum creativity. With Gervinho and Theo Walcott on the wings, there's an added dynamism, while Yossi Benayoun can add a more possessive player on the wing, or a playmaker behind Robin van Persie if Arsenal want to play 4-2-3-1. Arsenal's transfer deals could've been better (if they had got Mario Götze or Eden Hazard), but they've made the best out of a bad situation, and can still finish 4th, if not be in the running for a higher spot if players remain healthy. Crucially, in Yossi Benayoun, Aaron Ramsey, Andrey Arshavin, Tomas Rosicky and Park Ju-Young, Arsenal have strength in depth. Mikel Arteta, though, is a key part of Arsenal's starting XI, and though many say he is behind his best, he may find increased quality by playing with better talent.