Why Arsenal Lost To Liverpool In Pictures

Share All sharing options for: Why Arsenal Lost To Liverpool In Pictures

As you already know, Arsenal lost 2-0 to Liverpool on Saturday afternoon/morning. Instead of a full-blown tactical report, here are some chalkboards from FourFourTwo's Statszone app showing why Arsenal lost. 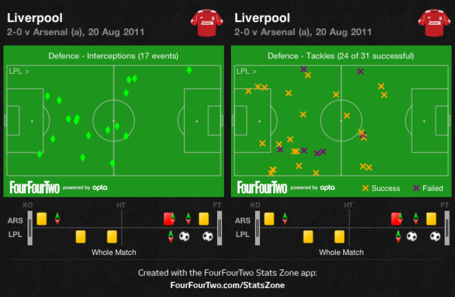 The picture on the left shows LIverpool's interceptions, while on the right, their tackles are shown. The amount of tackles and interceptions in the middle of the park indicated that Liverpool pressed Arsenal, especially in the midfield, trying to stop Arsenal from passing the ball and gain control of the midfield. 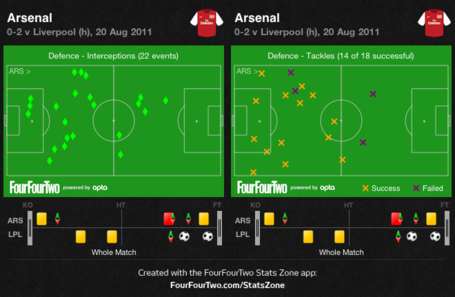 Meanwhile, Arsenal had very few Interceptions and Tackles in the midfield zone. This indicates some disjointed pressing--the front 3 seemed to, but the midfield didn't, and thus Liverpool had time and space to move the ball around, and completed 2 more passes in open play than Arsenal, and had more possession (by .8%), a rarity, especially at home. Furthermore, the Arsenal midfield didn't track runners from Liverpool's midfield, allowing Jordan Henderson and Charlie Adam to take shots from range. 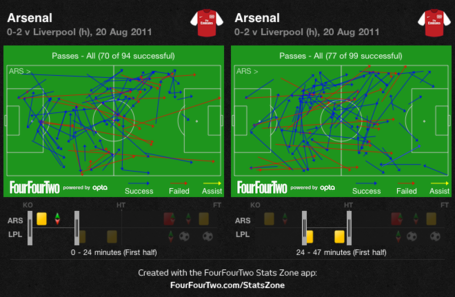 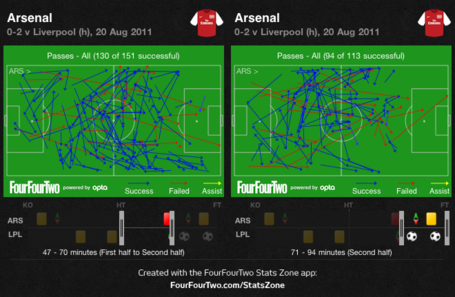 Because of Liverpool's pressing, Arsenal were very direct in the opening and closing exchanges of the match. Usually, Arsenal try to pass their way through in the opening 20 minutes, but not today, when they were very direct, and, again, used the width. As Liverpool began to tire a bit and back off in the middle of the first half, but especially in the beginning of the second half, Arsenal regained control of the midfield, and began to pass the ball in midfield. However, lacking creative flair, they didn't create enough chances. 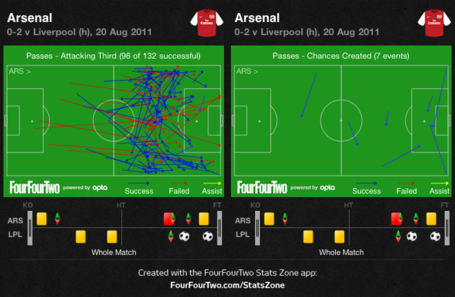 Again, like last week, Arsenal's final ball was poor; Theo Walcott completed zero crosses, while Andrey Arshavin only created one chance from wide areas, when he won the ball back off Martin Kelly. Also, Arsenal were again lacking blue lines in the area just around the penalty box, something that rarely happened in previous seasons. Looking at the chances created, on the right, only 2 came from open play passes into the final third; a worrying trend that indicated the lack of a link between the midfield and attack

Aaron Ramsey and Samir Nasri were given the responsibility to create for Arsenal. Nasri's positioning though, contributed to the lack of link between midfield and attack, and it is significant that his best moment was a dribble on a counter attack, rather than a pass. Nasri was playing almost as high as Robin van Persie, making Arsenal's formation much more like a 4-2-4. This meant he couldn't control the midfield and contributed to Arsenal's direct style. 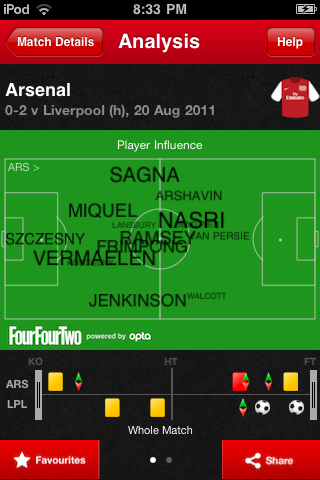 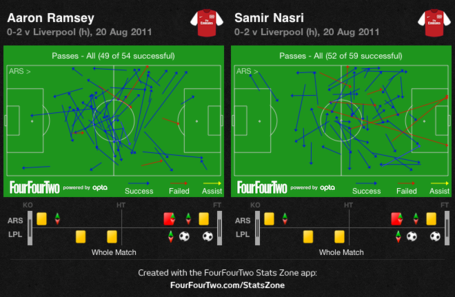 While both Ramsey and Nasri had impressive passing rates, neither created the chances necessary. Nasri was a bit better in this regard, as can be expected, as he was the main playmaker. However, Aaron Ramsey was somewhat disappointing. Playing in the Jack Wilshere role, Ramsey didn't break forward like Wilshere does, nor did was he penetrative like Wilshere. Instead, his passing was somewhat Denilson esque: 21 forward, 21 backward and 7 square. Arsenal miss Wilshere's ability to make runs from deep, something that Ramsey has, and should be able to do. 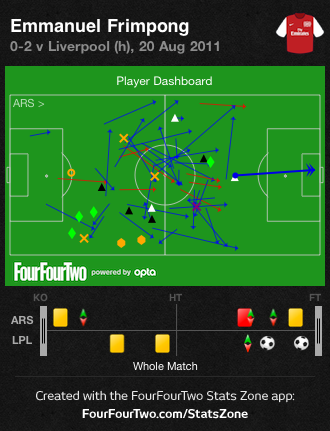 While Emmanuel Frimpong did get sent off, his performance was the most impressive. With Lucas Leiva closing down Samir Nasri, Charlie Adam remaining deep and Jordan Henderson counting out Aaron Ramsey, Frimpong was the Arsenal midfielder who often had space. He did not disappoint, making good contributions to the Arsenal attack, using his physicality and shooting well from range. He may be a little raw and naive, but he has a bright future ahead of him and can play a big role this season. (Event key here)

One aspect of Arsenal's play that was excellent on Saturday was the defending. Debutants Carl Jenkinson and Ignasi Miquel, who replaced the injured Laurent Kosicleny after a quarter of an hour, impressed, as did the superb Thomas Vermaelen, who in addition to making 5 interceptions, made 6 aerial clearances. Many Arsenal fans have been calling for a central defender, but if today is anything to go by, a left back may be a better purchase, as Ignasi Miquel didn't look out of place, and was extremely unfortunate that his clearance bounced off Aaron Ramsey.