Share All sharing options for: Looking Back: Arsenal 1-0 Villarreal, 2006

This match was the last ever European night at Highbury, and Arsenal made it one to remember with a very professional 1-0 victory against a tough Villarreal side in the first leg of the Champions Legaue semi-final. That year, Arsenal's back 4 set a Champions League record for their 10 clean sheets in a row and the 995 minutes between conceding goals. That record becomes even more impressive when one considers that the usual back four in that run was, due to injury, Emmanuel Eboue, Kolo Toure, Philippe Senderos and Mathieu Flamini. In the league, Arsenal's form suffered, but in the Champions League they flourished, beating Real Madrid, Juventus and Villarreal on the way to a final with Barcelona.

Arsene Wenger went with his preferred European formation, selecting a team in a compact 4-5-1. Jose Antonio Reyes was suspended, so Robert Pires came into the side. Theirry Henry was the lone striker, a role he perfected against Real and Juventus.

Villarreal had a defensive crisis with Gonzalo and Juan Manuel Pena absent, Quique Alvarez and 20 year old midfielder Cesar Arzo came into the back four. Manuel Pellegrini lined his side up in a very narrow 4-3-1-2 formation, with the emphasis on preventing Arsenal from gaining a huge advantage before the second leg. Juan Roman Riquelme would be the string puller in the midfield. 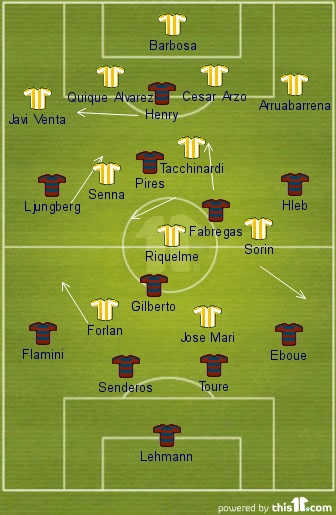 Arsene Wenger spoke before the match of starting with a high tempo and the match got off to a frantic pace. Arsenal were playing very quick, one touch passes, and pressing Villarreal from the front. With the defence of Villarreal disorganised, Arsenal could've gone ahead from a series of set pieces, but somehow Villarreal survived.

Villarreal didn't seem to want to press the ball, perhaps frightened of getting blown past by Arsenal's pace. Like many in the Premier League, they sat back, hoping that sheer numbers would prevent Arsenal from breaking through. However, with a 4-3-1-2 formation, they were very narrow, and soon Arsenal began using the width, especially the left where Freddie Ljungberg and Thierry Henry ripped Javi Venta apart. When Marcos Senna began to join Javi Venta, it left a gap in the middle, and Cesc Fabregas was able to combine with Robert Pires and overrun Alessio Tacchinardi. Fabregas' style of play was much similar to the way Jack Wilshere plays now: Very quick, one touch passes in a box to box role, instead of the pace setting and creator that Fabregas has become (one wonders if this, then, is Wilshere's natural path of progression). The lack of wingers also meant that Arsenal's full backs were able to get forward to great effect, with Juan Pablo Sorin having very little influence on the game, defensively or in the attacking phase for Villarreal.

Arsenal's pressing meant that Villarreal were forced to play lots of long balls, hoping that Jose Mari would break the offside trap, which was against their preferred style of play. Part of the reason why Arsenal's defence was so effective in the Champions League last year was the way that they were organised: They moved as a unit, and the whole team pressed and defended from the front. It shows that a team doesn't necessarily need the best defenders, it just needs the best unit.

Arsenal finally broke through in the 41st minute. Henry's corner was cleared out to him, and as he took on the Villarreal defence from the left, they pushed forward, trying to outnumber him. That, though, left Alex Hleb free, and his low cross was driven home by Kolo Toure, still up from the corner. It was poor defending from Villarreal, but patient play from Arsenal finally brought a very deserved goal.

Gilberto's role was odd when one thinks about the way Arsene Wenger sets his team out today. Usually he cares very little for the opposition, preferring to focus on his own team. Thus, man-marking is not usual at Arsenal, at least not on set pieces. However, here, Gilberto, either on his own initiative or on the words on Wenger, followed Riquelme throughout the pitch, and denied him space, and thus Villarreal's most creative force was strangled. That lead to Villarreal being overly reliant on long balls, and it was only until Villarreal started to press late in the game that Riquelme started to find the ball. That pressure also nullified Arsenal's attack, as Villarreal were happy to take a one goal deficit back with them to Spain.

A good performance from Arsenal, though perhaps they didn't convert enough of their chances. After starting off quickly and then stuttering, they identified that Villarreal were very narrow, and thus Alex Hleb, but especially Thierry Henry, Mathieu Flamini and Freddie Ljungberg exploited the wide areas given to them, and finally broke through a packed defence. Villarreal defended better in the second half as they started to press Arsenal and prevent the ball from being played through the midfield, but they offered very little going forward, mainly because of the excellent performance of Gilberto, who man-marked Riquelme out of the match.

An interesting game to watch, in terms of today's Arsenal. A back four with supposedly "weak" players, and a team in transition, with a young midfield maestro becoming an integral part of the team. The ensuing years didn't produce much in terms of winning trophies, but with a bit of luck, Arsenal could've won the Champions League in 2006 and the Premier League in 2008. The Champions League run also showed that Wenger could be tactically flexible, as he moved away from his favoured 4-4-2, and that his teams can use width, which has been a criticism of his current side. The question that must be asked is was the Arsenal side of 2005-06 stronger than today's team, in terms of squad, playing style, etc. When looking at the results, they appear fairly even, but it's interesting that the game this season that looked closest to the matches in the Champions League run in 2005-06 was the home victory against Barcelona. As I've said elsewhere, that performance needs to be the blueprint for future seasons.