Was last year finally the breakthrough year for Theo Walcott? After so many starts and stops, he finally sealed a place in the first eleven, and also set personal records in goals and assists, with 9 and 7, respectively. Along the way he still received criticism from the likes of Alan Hansen still saying he "has no football brain", but if he continues to perform like he did for most of the year, that should shut up the critics.

Walcott started the year as a sub, coming on against Liverpool before he started at home to Blackpool. There, his pace and diagonal runs ripped Stephen Crainey apart, and Walcott had the first hattrick of his career. He followed that up with a well hit finish against Blackburn rovers after combining with Robin van Persie. It was a combination that would be made a lot throughout the rest of the year. Predictably, though, Walcott picked up an ankle injury on international duty with England, and would miss the next 6 weeks or so.

He came back against Shakhtar, and made his first start against Newcastle in the Carling Cup, scoring 2 goals from central positions, showing off his pace on both of them. He hit the bar against West Ham and Newcastle and scored the crucial go ahead goal against Partizan in the Champions League. Finally, against Chelsea, he got a chance to start. Starting off slowly, he grew in confidence, preventing Ashley Cole from going forward too often. Finally, he got on the end of Robin van Persie/Michael Essien's throughball, and then smartly squared for Cesc Fabregas to give Arsenal a 2-0 lead. Moments later, he snuck in to rob Florent Malouda, and was found by Cesc Fabregas, before finishing in the bottom corner. It was a brilliant performance, and the one that sealed Walcott's position in the starting XI. While in the starting XI, he formed an excellent partnership against Robin van Persie, and assisted against Newcastle, Wolves, Blackpool, West Ham, Tottenham and Wigan, and scored against Newcastle, West Ham and Tottenham. He ended the year with a smartly taken goal against Fulham, showing, once again, that he is a very good finisher. 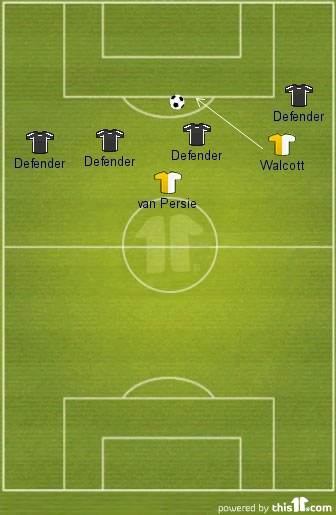 A diagram showing a typical Walcott diagonal run (that Nasri also made at the beginning of the year). van Persie drops deep, and is followed by a centre back; Walcott's diagonal run burns the defenders as he gets through on goal

Walcott may never get away from the stigma of having "no football brain". Certainly, his performances for England don't help. That however, has more to do with playing out of position; for England he plays a winger role, but despite his pace and size, he certainly isn't a winger. He is more accurately described as an inside forward; he was, after all, signed as a striker. The diagonal runs he makes beyond the false 9, either Chamakh or van Persie, allow him to get into central positions and score (see his goal against Spurs or Newcastle, or West Ham). He is adept at breaking offside traps and squaring for Robin van Persie, as he did several times this year, which is where a majority of his assists come from. He could improve his crossing, because against teams that play deeper and deny space for Walcott to run into, he becomes less effective. That, however, shouldn't stop him from being a key player in Arsene Wenger's squad.