Analysing Arsenal's Season: Why Did It Go Wrong?

Share All sharing options for: Analysing Arsenal's Season: Why Did It Go Wrong?

With just one game remaining and European qualification assured, it is time to look back on Arsenal's season. A season that appeared to have much promise in February fell apart after the Carling Cup defeat and elimination in Europe and the FA Cup. With a run of wins in 2 months, Arsene Wenger is coming under increased pressure to deliver a trophy winning campaign next season, yet if he fails to address Arsenal's problems from this season, it is likely he will fail to do so.

Not all of Arsenal's season was abject disappointment: After all, Manchester United, Barcelona and Chelsea were beaten at home, while Manchester City was comfortably beaten away. There were also many solid away performances, where Arsenal showed a grittyness about them that didn't appear to be present in previous seasons. However, the positives of the season just lead to more questions, specifically, if Arsenal can beat United/Barcelona/Chelsea at home, why can't they beat Blackburn, and why are they failing to win a trophy for a 6th straight year? Some will accuse Arsene Wenger of dogmatism, but if that truly was the case, Arsenal might've ended their long trophy drought.

Instead of being rarities, victories against Chelsea, Barcelona, Manchester United, and Manchester City should be blueprints for future campaigns. In those games, Arsenal pressed high up the pitch, used the width and, in the Premier League games, were able to score against teams that usually held them. If Arsenal keep up that intensity for the entire Premier League season they will probably win the league. Therein lies the problem however: The intensity takes a lot of energy out of the players, and thus, in March and April and May, instead of peaking in terms of performance, Arsenal are usually wilting.

Arsenal's defensive system at present time is a pressing system of through marking, which is brilliantly explained by Arsenal Column:

This season, it’s been awe-inspiringly integrated and one that is so dependent on the unit that one chink in the system can affect the whole. If the distances between the back four and the midfield and consequently, the midfield and the attack are too large or too small, the press will fail. The mantra is to win the ball back and that comes through structural pressing and the use of Dutch priniciples of through-marking. (Through-marking sees the players behind the first presser looking to eliminate the next pass through tight-marking and close attention).

Basically, that means that the front 4 (Nasri, Fabregas, Walcott, and van Persie) will press against the opposition's back four, while Song and Wilshere close up on the opposition's midfield and the back 4 try to prevent the opposing team's attackers from getting into attacking positions, which is why both Laurent Koscielny and Thomas Vermaelen are sometimes caught out because of the great risk they take in trying to win the ball early and then distribute to the midfield. 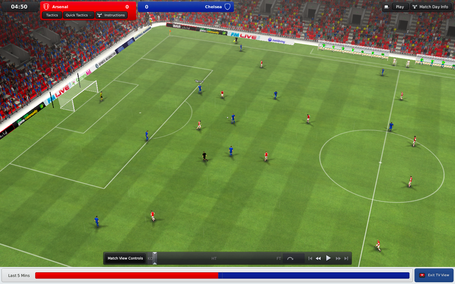 Arsenal's pressing in action in Football Manager 2011. Here, the front 4 have closed the Chelsea back 4. The player in possession has few options; his other midfielders are marked, as are his wide man and the centre forward, Drogba. If he attempts to play a pass forward, the Arsenal defender will try and win the ball quickly. Notice how the entire Arsenal team is squeezed into about half the pitch, maintaining good distance.

When Arsenal's pressing works, as Arsenal Column discusses, the distances between the midfield, defence and forwards are fairly constant; Arrigo Sacchi, the great Milan manager of the late 80s and early 90s, who revolutionised the offside trap and pressing, believes that the optimal distance is 25 metres from defender to attacker. Generally, when Arsenal press, they defend quite well; sometimes they become susceptible to the counter attack, but all defensive systems concede goals. The problem is maintaining the intensity required to play a pressing game, and what to do when Arsenal are physically incapable of playing such a game. Generally, this leads to a high defensive line, but no organised pressing; rather it's false pressing, with just one player closing down the player in possession, meaning Arsenal lose their shape and become susceptible to simple long balls over the top, as they were against Stoke last Sunday, and as they were in the calamitous second half away at Newcastle. With Diaby sent off and Squillaci replacing Djourou, Arsenal became disorganised, as did the pressing, and they conceded 4 goals.

There is no denying that uniform pressing works as a defensive system for Arsenal. After all, after 30 games this season, Arsenal had conceded a mere 9 goals from open play, the best rate in the league (even now, only 18 goals have been conceded from open play, the best rate in the league). That Arsenal concede so many on set pieces has less to do with the pressing system, but has more to do with defensive organisation on set pieces. Arsenal play a man marking system, and, given how many times runners lose their markers, it might be better to play zonal-man, so that even if a play loses his marker, another Arsenal player will pick him up.

Meanwhile, a solution for Arsenal's defensive system when they lack the energy to press is to do what they did against Barcelona in the first leg, which was to remain compact around 25 yards from goal. Their may, of course, need to be some tweaking, as Arsenal won't purely be playing on the counter attack, but as a strategy away from home, it could be beneficial. The idea would be to make the side compact and hard to play through, and, by playing a high line, make Arsenal less vulnerable in the air. Because maintaining shape and not pressing as hard requires less intensity, it could offer a viable alternative defensive strategy when Arsenal start to tire towards the end of the season.

There is of course, the second option, and that is to have a better well-rounded squad, so the players are kept relatively fresh. That Arsenal's back up players, especially in the midfield, have played so few games (Diaby 12, Denilson 6) speaks volumes of the quality of the squad at the club, and the reluctance of Arsene Wenger to rotate and keep his squad fresh. One of the major reasons United have been able to win the title this year is the impact of players like Anderson, Michael Carrick and Fabio, all of whom were not regular starters at the beginning of the season.

Despite how much focus has been placed on Arsenal's defensive issues, the bigger problem this season has been the attack. After goalless draws at home to Sunderland and Blackburn, and a 1-1 draw to Liverpool where Arsenal, despite facing a team with 2 teenagers in the back 4, did not create enough, winning the title became a very remote possibility, especially when Manchester United turned a prospective loss and draw to West Ham and Everton into 3 points. Last year, Arsenal scored 83 goals, and if the Arsenal of this year had scored that many, the title may have been won. The Short Fuse has already discussed the lack of outside the box goals from Arsenal this year, but it is interesting to note that the difference in goals from last year (13 after 37 games) is almost the same as the difference in goals scored from outside the area--last year, Arsenal scored 15, this year 3.

The problem Arsenal have had in recent weeks is breaking down teams that sit back and defend narrowly, packing the penalty box. The idea is to prevent Arsenal from finding options in the box, leading Arsenal to, perhaps in a panicky way, cross the ball in the area. Arsenal's crossing, to say the least, is below par, and, given that Arsenal are a short team and don't have the type of players to make runs to meet crosses, most teams are comfortable dealing with Arsenal's crossing play. Arsenal, then, would perhaps be better focusing on retaining possession and making probing passes to open up defences, or, as referenced earlier, having a shot. If the threat of a long shot is around, a defender may close down the Arsenal player, opening up space for Arsenal to play the ball.

Many will also rue Arsenal's lack of a goal poacher, equating the lack of goals with the lack of the said type of striker. Robin van Persie, for all of his excellent qualities, isn't a poacher, and doesn't make the type of runs that somelike like Javier Hernandez does. At Arsenal Report, Joss Bennett and Hayden Shaw had a discussion over whether a poacher should be signed at Arsenal, with Bennett coming to the conclusion that a poacher wouldn't be the best solution for Arsenal. While he is probably correct that a pure poacher wouldn't be a good solution, the term "poacher" should perhaps be qualified, as it is a position that has evolved over the last 10 years, with many tactical writers, such as Jonathan Wilson, believing it is a dying breed. Managers demand their strikers be involved more in build up play, and that is why Hernandez is more involved in build up play than someone like Michael Owen. However, a striker that is very good at finishing chances could come off the bench, and, with the runs that they make, create space for other Arsenal players. This player, though, would be dependent on better product from Arsenal's full backs and also their midfielders, which should really be the major focus of improving Arsenal's attacking play.

Arsenal do not need a major facelift to be champions next season. Their defensive play has been strong in open play, and better organisation on set pieces would have a major impact on the dis-effectiveness of Arsenal's defence. Furthermore, the rotation of players would help keep intensity at a high level, both defensively, with Arsenal's pressing game, and also on the attacking side. In recent weeks, Arsene Wenger said his team lacked energy, and that is down to the number of games played from December to February in the League and cups. A better squad that is more balanced would not only help change matches, but would also allow for more rotation and for a squad that has better fitness levels at the end of the season. Finally, it is important that Arsene Wenger becomes more flexible tactically. The 4-4-2 that he has employed as a Plan B has been effective this season, and it is perhaps a viable strategy for home games next year when teams will play deep, which has for too long been the strategy to counter Arsenal at home.

H/T to TheBackwardsGooner and Orbinho for data.