Arsenal again squandered a two goal lead against Tottenham for the third time in 3 years as they drew 3-3. A frantic open game saw attackers on top, and although Spurs scored another 25 yard volley, Arsenal's defence was culpable for all 3 goals.

Spurs started Rafael van der Vaart on the right, and Peter Crouch and Roman Pavlyuchenko up front, to win the aerial battle. Van der Vaart likes to play centrally, and he would often come in to make a third midfielder behind Crouch and Pavlyuchenko. Arsenal would need to track him to stop him influencing the game.

Tottenham started at a high pace and tempo, and pushed up and gave Arsenal space to play in. Robin van Persie's movement was superb, as was Theo Walcott's, who took up a central role to score Arsenal's first. Minutes later, van der Vaart leveled for Tottenham. It was a superb diagonal run, and a great run from Pavlyuchenko to create space but Abou Diaby has to defend better in that situation. Samir Nasri made a excellent diagonal off the ball run and then shot from outside the box to make it 2-1. It's a goal that we've seen rarely this season, and a run that we've seen rarely since Nasri returned from injury.

After Nasri's goal, the game settled down into a pattern, and there were some notable aspects of this pattern.

Perhaps it was tiredness, perhaps it was strategy, but Arsenal didn't press Tottenham. There were some aspects of "false" pressing, when one player makes a concerted effort to close a player down, but Arsenal let Tottenham have the ball in midfield. Perhaps they were nervous about Tottenham scoring from knockdowns, or nervous about the pace of Gareth Bale, but there was a notable lack of pressing in Arsenal's game, and from that, they lost the midfield battle, despite the man advantage in the middle of the park. Abou Diaby had a particularly poor first half, but Alex Song was also uncharacteristically poor (he won half of his tackles, while Diaby only won 2 on the ground). Part of this was also due to Tottenham pressure, and they were able to prevent Arsenal from passing the ball on the ground for most of the second half. Usually, Arsenal are able to play around pressure, but with Fabregas deeper than usual, he was unable to play long balls into van Persie. The one time he did, van Persie was called offside though it was tight.

Arsenal's failure to pressure and close down Arsenal also had a part in the last two Tottenham goals. For the strike by Huddlestone, it was a poor clearence from Fabregas, and Huddlestone was given too much time to get a shot away, as was Danny Rose last year. For the events leading up to the penalty, Fabregas again failed to close down Assou-Ekotto on the halfway line. Lennon made a diagonal run, and Assou-Ekotto played a brilliant pass, but Sagna stepped up for some odd reason and left Lennon in acres of room.

Because they failed to press Tottenham, Arsenal lost out in possession, and had to play deeper. With that being said, they were much more direct in the second half than the first half, and thus didn't create as many good scoring opportunites.

The other problem for Arsenal was the lack of height up front, and the failure to hold onto the ball. Arsenal only won 3 aerial challenges in the Tottenham half, and only one by Robin van Persie. 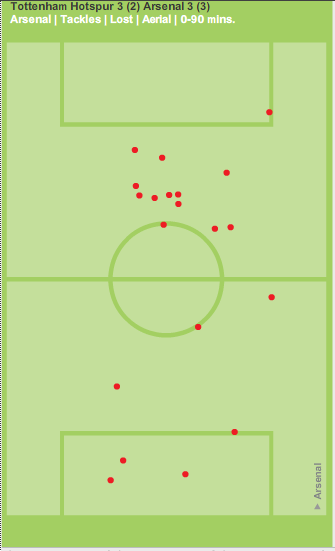 Niklas Bendtner won the other one, but he was again questionably used on the right hand side. Bendtner has been used there several times without success, while on the left he's proved an asset by cutting in and shooting and also by being able to get on Sagna's diagonals. Unfortunately for Arsenal, his entrance to the game was a non factor, and was probably a negative, as he replaced Theo Walcott, who was a nuisance for Tottenham through the game as he switched places around the front 3 with Samir Nasri and Robin van Persie.

Arsenal's failure to press Tottenham's ball players resulted in the concession of a 2 goal lead. Arsenal's defending in recent weeks has been a worry, and it was thought that Johan Djourou's return would change the defense. The defense itself wasn't bad, as they dealt with the aerial threat quite well in the end, but defending is a team job, and the forwards and midfielders must press better in the remainder of this season and next season.
When Arsenal did drop deeper, they lacked an aerial route, as Robin van Persie only won one aerial challenge. Thus they were unable to retain possession in the second half as Spurs dominated. The introduction of Nicklas Bendtner in a 4-4-2 might've been a more positive switch, but in the end Arsene Wenger's substitutions were questionable.

There is no doubt that Wenger is a superb manager, but this is the 6th time Arsenal have blown a lead. Better defensive play is required throughout the team, as is a more flexible system of play. I am not advocating the departure of Arsene Wenger, but only suggesting a change in the philosophy. A better and deeper squad is needed, and a better tactical set up is required, especially on the defensive side. If Arsenal are to play a high line, which suits the defenders at the club, they must press the ball, like Barcelona do.

For Tottenham, it was a superb come back, and they deserve credit for the way they pressed Arsenal in the second half. Arsenal passed the ball at a 78% rate, which was the lowest since the 4-4 draw at Newcastle.