Arsenal's title challenge is surely over barring a disastrous collapse from Manchester United after they drew 1-1 with Liverpool. For much of the game, it seemed similar to the Blackburn and Sunderland matches at home, until Cesc Fabregas won a penalty after some neat build up play. We all know what happened next, so let's look at the chalkboards.

Liverpool started with what can be called a 4-4-2, but with one wide player, Raul Meireles, very much a central midfielder. Thus, Arsenal generally had more space down the right hand side, and for 15 minutes, Theo Walcott tore Liverpool apart, eventually resulting in Fabio Aurelio pulling his hamstring. 17 year old Jack Robinson was put on, but instead of Walcott getting round him with ease, he was pushed towards the byline, and ended up with a fair amount of blocked crosses. However, he also had another option with Emmanuel Eboue often supporting him, and mean that play could continue to move. To help the 17 year old deal with Walcott, one of Jay Spearing or Lucas Leiva was pushed wide, and this left space in the middle for Arsenal. In the first half, they were very much on top, and perhaps should've done more.

In the second half, Liverpool pushed Luis Suarez to the left hand side to stop the runs of Emmanuel Eboue, and Walcott, before being taken off, was left isolated. This curbed his effectiveness, and also meant that Arsenal were going down a cul-de-sac when they played out to the right hand side. 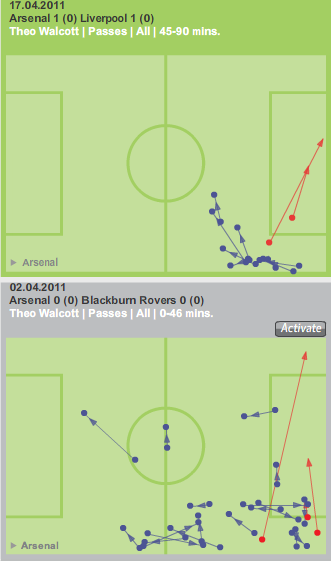 Because Arsenal were cut off of their wide right option with Theo Walcott getting isolated, and because Samir Nasri likes to move inside, a majority of Arsenal's play was as ever down the middle. Because of this, Liverpool defended deeper and narrower in the second half than they did in the first, resulting in more interceptions and more tackles in their own third. 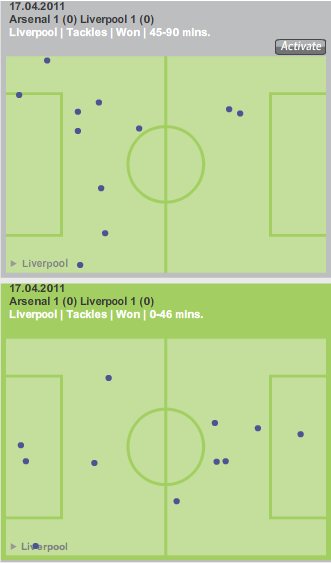 Finally, like in recent home matches at the Emirates, that forced Arsenal back into their crossing default. Again, there were very few successful crosses, and with Nicklas Bendtner playing right wing, there wasn't a target that could compete with Martin Skrtel and Sotiris Kyrgiakos in the air. You could look at the crossing pattern for any of the recent home games, and they all look fairly similar: A predominance from crossing on the right, and many unsuccessful targets. When Andrey Arshavin came on, he looked to beat his man and come inside, and this offered a better threat than crossing. When Arsenal did score, it came from good build up play between Nasri and Fabregas, and it seems surprising that despite the better chances created from build up play, Arsenal continue to play a lot of crosses. 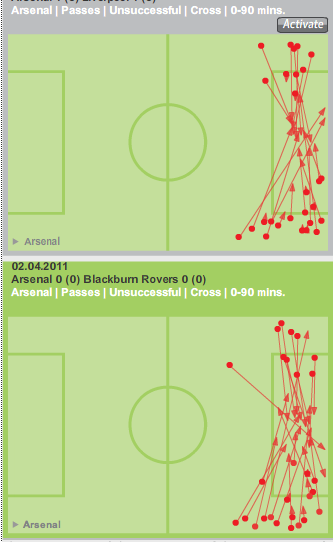 It is perhaps too early to review Arsenal's problems this season, but the general inability to break teams down who defend deep is problematic, and has cost Arsenal the league title this season. Increasingly, teams that come to the Emirates come looking for a point on a nil-nil draw, or the chance to nick a goal on the counter attack. If Arsenal are to win the league, they must create a better strategy for breaking teams down. Using the width to cross the ball aimlessly is not constructive, but using it to dribble or pass your way through is.