Why Is Cesc Fabregas So Important to Arsenal?

Share All sharing options for: Why Is Cesc Fabregas So Important to Arsenal?

Of the players at Arsenal, only 3 have won a trophy at the club. Gael Clichy was part of the Invincibles, and was, along with Cesc Fabregas and Robin van Persie, won the FA Cup in 2005. One by one, the team that won 3 FA Cups and 2 Leagues between 2001 and 2005 was dismantled. Patrick Vieira was sold in 2005, and although they had a last hurrah in the Champions League in 2006, Wenger moved on to build his third team at Arsenal. The man they'd be built around was the internal replacement (despite the claims of some in Spain) for Patrick Vieira, Cesc Fabregas.

Fabregas' emergence in the 2004/05 season was one of the reasons Wenger was willing to let Vieira go, and gave Arsenal a glimpse of the future. Another was that

When Cesc Fabregas was 18, 19, I would play him in a 4-4-2 with Patrick Vieira and I saw it did not work," said Wenger. "Then I had the decision to make about letting Patrick go, because Gilberto Silva and Vieira worked, Fabregas and Silva worked, but I could not play Fabregas and Vieira

Perhaps Wenger could've kept Vieira, and played him, Gilberto and Fabregas in the 4-2-3-1 of today, but considering that a lot of Arsenal's goals and creative play came from the front four of Bergkamp, Henry, Ljungberg and Pires, a shift in formation was never going to happen. However, once those 4 had moved on, Cesc Fabregas became the main man at Arsenal, and the side, as future signings indicated, was built around him. Samir Nasri, although a wonderful player in his own right is not a playmaker in the mould of Cesc Fabregas, and Andrey Arshavin is very much a finisher in the final third rather than a creator in the midfield. Mathieu Flamini's departure was unfortunate, as it prevented Fabregas from having as much influence in the rather lost 2008/09 season, but that was also the first year Fabregas missed a large portion of the season. The resulting midfield of Denilson and Song was not creative enough, and until the signing of Andrey Arshavin, Arsenal found it hard to break teams down. Last year, Fabregas pushed higher up the pitch, and saw a record in goalscoring, and his second highest total of assists. He also missed some crucial games with injury that hampered Arsenal's title challenge, and perhaps his influence is best shown in the 3-0 victory over Aston Villa, where Arsenal threatened for most of the match, but failed to break Villa down until the introduction of Fabregas. That he got injured scoring his second goal underlined both his importance and how easy and frequent it is for him to suffer a recurrence of his chronic hamstring injury.

His injury problems have continued into this year, and when he limped off against Stoke, Arsenal fans feared the worst. He is however scheduled to come back for the Barcelona game, but, looking at the statistics, one can understand why Arsenal fans are concerned without Cesc Fabregas.

One reason for Cesc Fabregas' influence is his positioning in the Arsenal team. Although the Arsenal midfield is very fluid, and frequently rotates, Fabregas spends the most time in the role behind the striker (so much so that it's called the "Cesc Role" by Arsenal fans), and, as the passing triangle diagram shows below, he has the most attacking options to pass too. Adding in the attacking full backs, and another central midfielder, and the options for Fabregas to play one twos with play in almost doubles. This puts him right in the middle of Arsenal's attacking game, and thus most successful Arsenal moves go through Fabregas at some point. If the main playmaker in the side was Nasri or Arshavin, for example, their passing options would be more limited, and they'd find it harder to become involved in the game. If Fabregas is being marked out of the game, he can drop deeper in the midfield to receive the ball, and then either play the ball wide, to a midfielder who has taken up his role, or play the ball long into space. 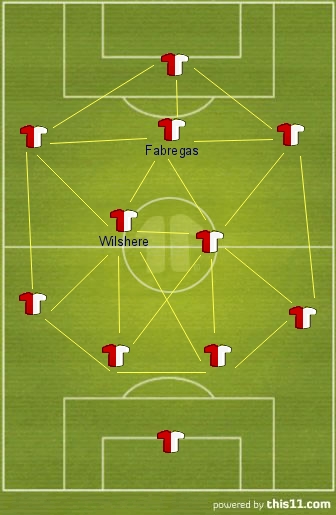 Statistics: How Arsenal Perform With and Without Cesc Fabregas

Note: Games where Fabregas has been a substitute has been taken into account. Minutes where he played was added to total minutes from the 11 games he played completely in the Premier League, and were divided by 90 to get a game total. It's imperfect, but it's close enough.

*Before the Leyton Orient replay, these totals were 4 and 1.81

The FA Cup games can be somewhat discounted because of the small sample size, and the level of opposition, so let's focus instead on the Premier League total. There are also, other factors of course, such as who else is playing with Fabregas, but with all things being equal, when Fabregas has played, Arsenal have scored twice as many goals, and score .46 more goals per game with him. Clearly, he's an important player, and without him the team loses not only goal scoring potential, but also some incisive passing. Unlike his Spanish colleagues, Xavi and Iniesta, who sometimes prefer to play the safer square or backwards pass than hit a hopeful forward ball, Fabregas is a player who is always looking forward with his passing, and when Arsenal lose Fabregas, they lose his quick forward play. It's interesting to note that Arsenal's highest amount of possession and passes against opponents with 11 men in the Premier League came in the recent 1-0 victory over Stoke, where 702 passes were made, and there was 71% possession. That amount is similar to the numbers that  Barcelona usually has, but without the cutting play of Cesc Fabregas, Arsenal failed to create any clear cut chances from passes into the box, as the Chalkboard below shows:

Lacking Fabregas, Arsenal were unable to break down the deep Stoke line, who were pretty comfortable throughout

Fabregas, while having the best passing at the club also has the best vision. Most teams, when defending against Arsenal, tend to press Arsenal in the midfield, to prevent them from settling into their passing game. The best way to avoid that is by playing long balls to the wings, and recently Fabregas has excelled with this sort of passing. Against Wolves, he avoided midfield pressure by passing to Walcott and Arshavin, and as Arsenal rushed into a 4 goal lead against Newcastle, Fabregas' long passing was evident as well. In fact, in the second half, when Newcastle pushed higher up, Fabregas should've played more longer passes for Walcott to chase, but as Arsenal dropped deeper, and Walcott was replaced, this became impossible, and was one of the contributing factors to Arsenal blowing a 4 goal lead.  When Arsenal were pressed in the midfield against Birmingham, and as they kept on giving the ball away in the midfield, Fabregas' long passing was extremely missed, as it could've relieved pressure on the midfield, and created more clear cut chances.

The big question is whether Cesc Fabregas is irreplaceable or not. With his continual transfer links to Barcelona, and his continued injury problems, it's a question that Arsenal have to address. Fortunately, Jack Wilshere's displays this show that he has the range of passing that Fabregas has, and, is perhaps most suited to replicate his intricate incisive passing. Against Wolves the two had similar passing ranges, and although Fabregas had about twice the amount of passes, if Wilshere is played in the Fabregas role, it appears that he could replicate Fabregas' incisive passing.

As the deeper player, his attacking passing options are somewhat limited as shown by the passing triangle, but with Arsenal's positional rotation, he should find himself in attacking roles plenty of times. Against Birmingham it never quite worked out for Arsenal, and although Wilshere was impressive, he wasn't as influential as Arsene Wenger might've hoped. If Arsenal continue to have problems creating attacking play without Fabregas, Wilshere has to push forward and influence the game, as he alone can be the replacement for Cesc Fabregas.