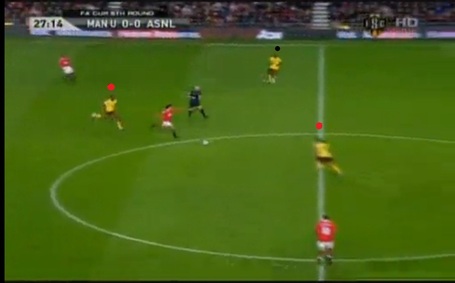 This goal comes via a break. Wilshere and Diaby have pushed up, but Diaby is the midfielder with the red dot chasing Fabio. Denilson, in red, is too far away, and initially backs up before closing Fabio down. Fabio's first touch is actually very poor, leading to Denilson charging forward, but, if he had moved forward originally, like Alex Song does, he probably would've won the ball. In giving Fabio too much time, he lets his compatriot pick out the perfect pass to his brother, breaking on the right. 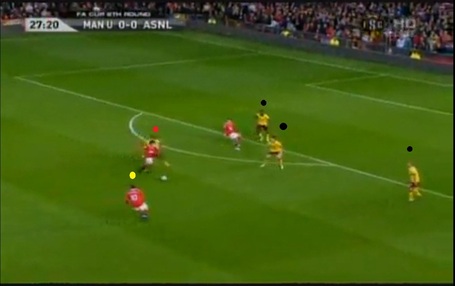 Despite the counter attack, Arsenal are in a good defensive position. They have 4 back, against United's 4, and with Rafael out of picture and offside, United only have 2 passing options. Diaby, in red, is covering Fabio. There is however, one problem: Rooney, in yellow, is unmarked. Djourou and Koscielny are holding their line, and Gibbs doesn't want to break forward because he then leaves the whole right open for Rafael to come back onside, and for Fabio to make an off the ball run. What follows this solid defensive position though, is laughable. 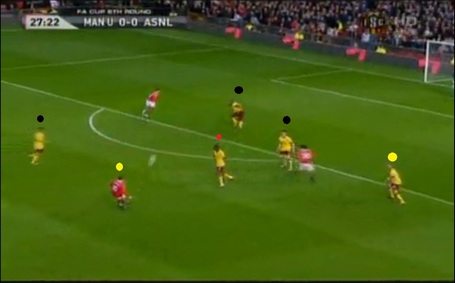 Fabio, after making his pass to Rooney, has run off Diaby to Koscielny, in black. Denilson, in black, is coming back, but isn't marking anyone, which is the first error. He should be running towards Rooney. The second error is when Diaby, in red, fails to close down Rooney. As the closest to him, it should be his responsibility to close him down.

Finally, Hernandez beats Djourou in the air, Fabio runs off Koscielny, and noone runs with him, leaving him with the easy finish.

This also another counter attack from Manchester United, straight after Arsenal have their best chance of the match. 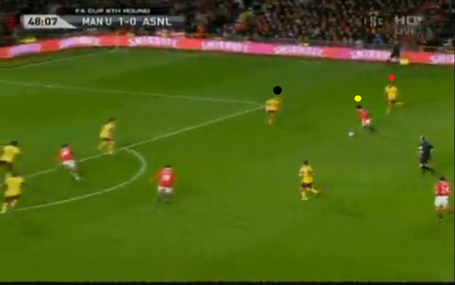 Arsenal again have good numbers back. Besides Gibbs (black dot) and Denilson (red dot), Sagna, Djourou, Koscielny and Wilshere are back, while United have Rafael, Gibson, Hernandez and Rooney attacking.

The first problem occurs though with the closing down, or non event, of Valencia (not pictured). Denilson takes too long to do so, giving Valencia too much space down the right flank. Then, to compound the problem, Gibbs gets in a bad position, too far away from Rafael, and too isolated, leading to this: 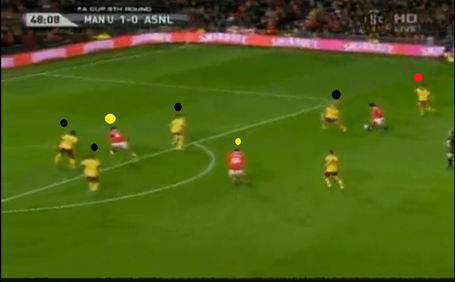 Rafael goes by Gibbs too easily. His cross isn't intercepted by Koscielny, Djoruou deflects it away, but Rooney is unmarked to head the follow up. Sagna was close to Rooney, but with no other United attacker in a goal threatening area, he has to mark Rooney closely. He doesn't, and Rooney heads home to make it 2-0.

At 2-0, United continued to play on the counter attack, and they were closer to getting a third than Arsenal pulling a goal back. With the two goal advantage, they can afford to play deep and narrow, and force Arsenal to resort to crossing the ball; not their favourite tactic. It's easy to defend, and until Chamakh comes on, and then later Aaron Ramsey, Arsenal are not penetrative enough.

Arsenal are not as bad defensive team as the media make them out to be. Despite their supposed soft centre, they hold the 3rd best record in the Premier League. There is however, room for improvement and they often make silly mistakes that lead to goals. With Johan Djourou and Laurent Koscielny as a partnership, that didn't happen often, with the two conceding only 2 goals as a pair in the Premier League. However, with Djourou's injury, the reintroduction of Sebastien Squillaci and Laurent Koscielny as a defensive partnership makes the defensive unit susceptible to pace and counter attacks.

Arsenal prefer to defend through pressing and squeezing the space. Their possession style football, however, makes them susceptible on counter attacks, as teams can quickly attack a reduced midfield and avoid the pressure. As we saw today, there were major defensive errors that allowed United to clinically take their chances. A better defensive team wouldn't have had those errors, and for Arsenal, the strategy must be to close people down even when they are not pressing as a team. If they had done that today, the two goals that scored probably wouldn't have happened, and Arsenal could've gone on to win the game. If Arsenal want to win the Premier League, Arsene Wenger has to have his defence end the trend of making mistakes when defending counter attacks. If that involves bringing in an outside coach, such as Martin Keown, or Lee Dixon, then so be it. It's a small price to pay for lifting the trophy in May.

All thanks to Arsenalist and Fox Soccer for the pictures. No breaking of copyright was intended.