Arsenal Use Their Own Brand of Football to Beat Barcelona

Share All sharing options for: Arsenal Use Their Own Brand of Football to Beat Barcelona

The previews tipped it as a match between two sides with similar footballing philosophies. It was one for the purists, they said. Arsenal-Barcelona did not disappoint for those who love to see constructive passing (928 passes were completed, according to UEFA stats; significantly more if you believe OPTA's powered Total Football App, which I do). Yet, despite Clive Tydsley calling Arsenal's second "A Barcelona goal, scored by Arsenal", Arsenal won by employing their own football philosophy. It wasn't possession for possession's sake, as some of Barcelona's passing was. It was still possession football, but with a twist: In order to maximise the possession Arsenal had, it was football with classic Arsenal style, a style that saw them go 49 games unbeaten. It was the use of deadly quick counter attacks, and Barcelona could not handle it.

Arsenal started the match much better than last year; last year, they barely had a touch in the first 15 minutes, never mind a shot; this year they started as arguably the better team, having a very good opportunity within 10 minutes. Instead of Arsenal being shocked by Barcelona, it was the reverse: Arsenal's hard pressing and pace surprised the Spanish champions, and they took time to settle. Arsenal had perhaps the better of chances, but Barcelona began to settle, and suddenly, a goal seemed likely. Arsenal's high line, played by design to squeeze the space seemed perilous at times, and it was finally breached, Villa running onto a Messi pass and scoring. He was played onside by Clichy, but despite mistakes like this, Arsenal continued to squeeze the space and the predicted thrashing didn't happen.

Pressing as one can be a useful defensive tactic, but it is team pressing that ensues gaps aren't created. Too often over the last few years, in poor Arsenal performances, the forwards have pressed and left too much of a gap between them and the midfield and the midfield and the defence. Teams can play between the lines, and they can cut Arsenal apart. When Arsenal press as a unit, though, the gaps get closer. They squeeze the space, and opponents cannot play as effectively between the lines. What Arsenal did yesterday after Villa's goal was sound defensively. Yes, they were somewhat lucky that Barcelona didn't get a second, but, as most have failed to acknowledge, they prevented Barcelona from getting many clear cut opportunities. They didn't always press, but they played a high line, and squeezed the space, effectively parking the bus in the upper half of their own half. Playing a 4-4-1-1 when defending, allowing Arsenal to match up with Barcelona, they were compact and disciplined, and kept about 25 metres between the defence and midfield, a space that Arrigo Sacchi found optimum for defending through pressing. 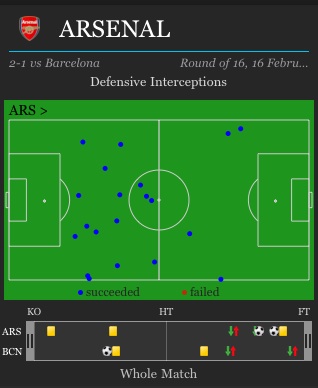 Arsenal's compact positioning meant that while they were camped in their own half, they were able to intercept and win the ball back far from the penalty area, meaning Barcelona had less chances

via assets.sbnation.com and the Total Football App

Often, the centre halves did not have a direct opponent to mark, as Lionel Messi, playing as a false 9 played very deep at times. For most teams that play Barcelona, this causes defenders to become anxious and feel like a rabbit caught in the headlights, moving up, and leaving too much space for Pedro and Villa to run into (as Real did). Arsenal, however, were disciplined, and Djourou and the superb Koscielny kept their line with Clichy and Eboue, and were more than happy to mark zones rather than individual players. Teams do this all the time in modern football with attacking fullbacks and rotating midfields changing the way defenders mark, but usually there remains an opponent direct to the defender. Koscielny and Djourou, however, left without an opponent, remained disciplined, and when they did get a direct opponent, Koscielny, on many occasions, won the ball back quickly and transitioned Arsenal onto the counter attack, where Arsenal got a few half chances from. Theo Walcott did not have the influence he was expected to have, but the attention paid to him by Barcelona meant other players became free, and Jack Wilshere was superb in finding Samir Nasri, Robin van Persie and Cesc Fabregas, completing the most passes out of any Arsenal player, and at the highest percentage.

Barcelona are not used to facing many sides as good at keeping the ball as Arsenal in La Liga, nor are they used to teams having excellent fitness, as Arsenal do, because of the high tempo in the Premier League. As last year, the constant pressing from Barcelona had an effect on their fitness, and Arsenal began to take control. Guardiola's substitution of Keita for Villa, rather than being a response to Arshavin coming on for Song, was done because Arsenal had started to look more dangerous. Keita, while taking away from the attacking prowess of Andres Iniesta (who would've favoured attacking an Arsenal midfield that had Samir Nasri and Jack Wilshere as the deeper two), should've solidified Barcelona's midfield, and, with Iniesta replacing Villa on the left of the forward 3, enabled better retention of the ball. Arsenal's substitution added more attack, and was, as Wenger admitted afterwords, a bit of a gamble, but it was a gamble that paid off. Arsenal started to take advantage of a tiring Barcelona and pressed them back, and Clichy, able to get forward on a rare occasion, played in van Persie who beat Valdes at his near post. It may have been a lucky goal, but it was more than Arsenal deserved, and just 5 minutes later they scored again, with a goal that Thierry Henry and the Invincibles would've been proud of. Koscielny, having won the ball back after a mistake from Djourou (who, while giving the ball away a few times was still very good) passed to Bendtner, who passed to Wilshere, whose superb one touch pass found Fabregas, who turned and played in Nasri. The rest is history, but it was a wonderful, pacey counter attack, the type that Arsenal are famous for.

Having finally got the lead, Arsenal dropped deeper to their 18 yard box to see out the game, and, in the end, they did so quite comfortable, a mistake from Andrey Arshavin notwithstanding. While the focus will be rightly so on Wilshere and the Arsenal attack for getting back into the game, it was an outstanding team performance, going forward, and more importantly, defending, as a team. Barcelona rarely score only one goal, and the Arsenal defence, so often ridiculed for their susceptibility deserve much praise for keeping the best attacking team in the world out for most of the 90 minutes.