Another two goals from Robin van Persie saw Arsenal see of the challenge Wolverhampton Wanderers comfortably enough, winning 2-0. In a game Arsenal had to win after Manchester United's victory earlier in the Manchester Derby saw the Gunners produce a professional performance, and, after last weekend's defensive debacle, a much needed clean sheet. The return of Alex Song and Johan Djourou saw an added solidity to Arsenal, but they were also superb going forward, with only the goalkeeping of Wayne Hennessy preventing a 4 goal victory.

For Arsenal, they kept their 4-2-3-1 shape that has been synonymous with their campaign all season, while Wolves played the same system they used against Manchester United, 4-5-1, with Jamie O'Hara looking to play off the front man.

With Arsenal's collapse to Newcastle last weekend being partially the result of increased Newcastle pressure, Wolves obvious tactic was to do the same to Arsenal: Press in the midfield, stop Arsenal from getting a passing rhythm and use direct passes to Kevin Doyle and the wingers to get crosses into the box. Arsenal's passing suffered as a result of the midfield pressure: To avoid it, they were forced to hit long balls to the wings. There wasn't the usual midfield interplay, and thus, Arsenal looked disjointed, and the goal didn't come after a period of sustained pressure.

by Guardian Chalkboards Wolves still pressed after the first goal, but with confidence restored, Arsenal became a lot more composed when passing the ball. They were still passing long to avoid pressure, but to also take advantage of Wolves very high line. With the pace of Arshavin and Walcott, the high line allowed the midfield players to hit passes into space, and while there was more midfield interplay in the last 15 minutes than the first, Arsenal were still playing long, and this long passing should've lead to at least one more goal, with Walcott and Fabregas having their shots somehow not go in. 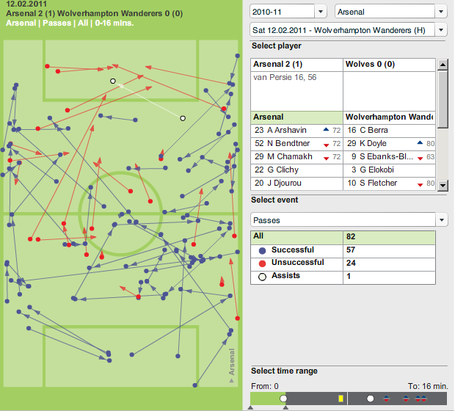 The second half saw an increase in Arsenal pressure, and an increase in chances, but the 2nd goal finally came from a wonderful counter attack, with 6 passes bringing the ball from an interception by Johan Djourou to the finish by Robin van Persie. The main pass was again another long one, with Fabregas taking advantage of the Wolves defense being pushed up and Walcott's speed. After the goal, Arsenal, mindful of the concession of 4 goals in 20 minutes last week, sat back, and began to play on the counter attack. Theo Walcott's pace was an asset again, and he should've done better when he had the chance to play in Bendtner or Chamakh, but shot instead.

The way Arsenal avoided midfield pressure was interesting, especially considering the way Barcelona incessantly press. Last year, Arsenal had very time to play their passing game, and only around the last 20 minutes did the game begin to swing, due to the introduction of Theo Walcott. This year, Barcelona have shown that  teams that press but don't use all players -- false pressing if you will--, they rip the defense apart, as they did against Real, and against so many teams in La Liga. In fact, the only time Barcelona have failed to win this season is when teams sit back and counter attack, and avoid the pressure in the midfield. Seeing how effective Arsenal were at this last year, and with Eric Abidal, who was ripped apart by Theo Walcott last year playing centre back with Carles Puyol injured, Cesc Fabregas playing passes into space for Theo Walcott to run onto could be an effective way for Arsenal to score, if they're defending deep and in numbers.