An excellent comeback from Arsenal who had to overcome a resilient Everton side after going down to a Louis Saha goal that was controversial. With both Manchester United and Chelsea winning, 3 points were vital, and Arsenal finally got the two goals that were needed to get a victory, that in the past, might have deserted them.

Everton started off the better side, and Arsenal were having trouble keeping possession, especially in the midfield. Everton pressed in the midfield, and Fellaini was superb, winning almost every challenge against the Arsenal midfield of Song, Wilshere and Fabregas. After their early pressure though, Arsenal began to settle down and pass the ball in the midfield and Fabregas fired wide after a van Persie backheel and a Walcott shot was saved by Tim Howard. Everton, though, took the lead, quite contentiously. A superb counter attack from Seamus Coleman then saw his pass clipped for Louis Saha, who was in an offside position. Laurent Koscielny though clipped the ball, and Saha finished into the bottom right corner. Although Koscielny played the ball, it was not an intentional pass backwards, and he only played the ball to prevent the pass from going to Saha. Because of that, Saha was active, and thus should've been given offside. Apparently, Andy Gray and Richard Keys need to explain the offside rule to Sian Massey Stephen Childs and Lee Mason, as almost everyone in the Emirates saw he was offside. The goal rattled Arsenal, and although they had chances from Fabregas and Koscielny, Bilyaletdinov also had a chance, and from a block, Alex Song got injured, and had to be taken off at half time, where the Arsenal fans booed off Lee Mason and shouted things that aren't appropriate for this family website. 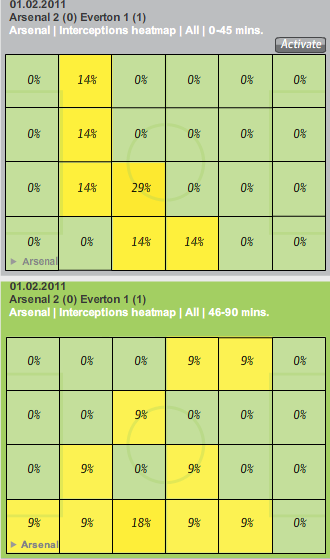 Arsenal started the second half much better, and started to press in midfield. They were still having problems getting clear cut chances, and Arsene Wenger brought on his final two substitutes, Andrei Arshavin and Nicklas Bendtner coming on for the ineffectual Tomas Rosicky and Jack Wilshere. Arshavin's impact was almost immediate, though the goal had some fortune: A chipped Fabregas pass was headed backwards by Jack Rodwell, but Arshavin did well to finish past Tim Howard, and, if it was fortunate, it was justice for Arsenal. 1-1, and they started to press forward for the winning goal. van Persie was taken down 25 yards from goal, and his ensuing free kick was pushed over the bar by Tim Howard. From the resulting corner, Koscielny peeled off his marker and headed home to give Arsenal a 2-1 lead. Everton responded by bringing on Victor Anichebe and Phil Jagielka to add presence in the box, and they started launching long balls into Arsenal's penalty box. Arsenal always looked comfortable, however, and for all the Everton pressure, it was Arsenal who had the best chance, with Clichy cutting past Jagielka and Heitinga to then inexplicably pass for Walcott when he could've shot. 5 minutes of injury time was added, but it passed largely without incident, and Arsenal got a deserved 3 points. The increasing of pressure was key in the second half, as before that, Everton were comfortably stroking the ball around in midfield. After the match, Arsene Wenger said

I feel we had chances but our game lacked a bit of cohesion in the passing and we lost some balls down to good closing-down from Everton and as well to some technical mistakes. And today I would say it was more a victory of a team with fantastic spirit and a never-say-die attitude than our usual game. But that of course is needed in a competition like that.

It was a good comeback, the type that Manchester United are famed for, and, given that Everton have only lost to Arsenal among the teams in the top 6, the 3 points won today could be crucial come May.