Tuesday's disappointing draw with Wolves has led to more questions about Arsenal, especially our ability to break teams down. Despite 73% possession, and 26 shots (11 on goal), the Gunners were unable to get past a resolute Wayne Hennessey, and have been unable to capitalise on poor results by Chelsea and Liverpool.

The most exasperating aspect of the whole match, though, was the inability to take chances, and then, late in the second half, create one on one chances against a team with a poor defensive record. Wolves did make it difficult for Arsenal, but did so by employing tactics that many teams have used in the past: Defend with 10 (or 9, once Nenad Milijas was sent off), and prevent Arsenal from passing their way through. The addition of Gervinho and a switch to a more direct, wing-based style of football has made Arsenal better equipped to break teams down, but the fact remains that Arsenal has scored less goals at home than their other rivals in the top 5.

Despite the negative result, there are some positive aspects of Tuesday's match. Tomas Rosicky replaced Aaron Ramsey as the main creative midfielder, and did a fine job, showing a good passing range, and incisive passing, but also an ability to bring dynamism from midfield, something that Arsenal have been missing in the absence of Jack Wilshere and Abou Diaby. Rosicky spread play well, and was not the reason for Arsenal's struggles; he replaced Ramsey's creativity easily, and was perhaps better than Ramsey had been in recent weeks. Certainly, Rosicky is more penetrative and direct than Ramsey was against Stoke City, a match that was somewhat similar to Tuesday's game. 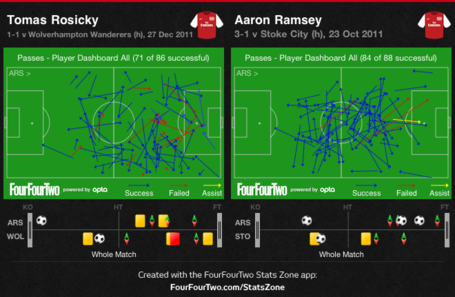 Theo Walcott was missing due to illness, and at times, Arsenal missed his pace on the right. As part of a forward 3, Walcott has been an integral part of a much more direct Arsenal, who focus on quicker transitions and less on slow exchanges of passes around the area, as Arsenal were sometimes guilty of last year. Exchanges of passes around the box is not a bad thing, though, and, at times, it's been something that's been lacking from Arsenal's play. Yossi Benayoun brought together the best of both styles of play on Tuesday. While lacking the pace of Walcott, Benayoun made intelligent runs (he was unlucky to slip as he was running through on goal) and also gave Arsenal width when required, along with giving Arsenal more incisive ground play than what they have with Walcott. Benayoun also has the ability to beat defenders, and he was unlucky to substituted for Andrey Arshavin. 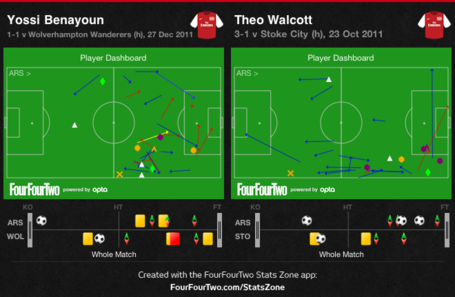 There is however, the annoying and negative parts of Arsenal's game from Tuesday. The lack of fullbacks is problematic for Arsenal's attacking play. Since Andre Santos has gotten injured, Arsenal have played 4 games, winning 2, drawing 1, losing 1 and scoring 4 goals against 3. Having 4 centre backs gives Arsenal more aerial security at the back, but the converted centre backs, through no fault of their own, have problems giving Arsenal's wide men support. Quite often, Thomas Vermaelen failed to make runs beyond Gervinho, making it easy for Wolves to double up on the Ivorian, who had a mediocre game after his goal. This is also crucial in terms of giving Arsenal more width. Arsenal tend to play a right footer on the left, allowing the left forward to cut in, and either shoot or pass, or drive to the byline. Without Andre Santos providing width, Arsenal's play becomes extremely narrow, as it did on Tuesday afternoon. When Vermaelen has gotten forward, he has tended to attack through the middle, as has Djoruou when he's gotten forward. This is the problem Arsene Wenger faces. Most teams that play with 4 centre backs (Stoke comes to mind) do so on the expectation that these centre backs acting as full backs won't cross the half-way line, and as such, expect their wingers to attack on the counter, and thus exploit more space. Otherwise, they can often only win throw ins or set pieces. That works for Stoke, but it doesn't work for Arsenal; Arsenal's attacking system requires full backs, especially on the left side, to provide natural width. Without at least one natural fullback coming into Arsenal's team, their attacking play will continue to suffer, making a fullback a priority signing for Arsene Wenger this window.

Often, Arsene Wenger leaves it to his players to solve solutions for the challenges that they are thrown up against in game--a likely reason why Arsenal, with so many young players over recent years, have failed to win a trophy. However, even with more experienced players, Arsenal have failed to learn the lesson of the aimless cross. The aimless cross was a feature of frustration towards the end of last season, with Arsenal's full backs often providing forlorn hope with their lofted balls into the mixer. Against 10 men, it seems a poor strategy; poorer still when Wolves defenders, Roger Johnson and Christophe Berra, would rather face launches into the mixer rather than constructive and quick passing play that can drag them out of position. When this packed defence was forced to deal with accurate, clipped through balls from Tomas Rosicky and Aaron Ramsey for Robin van Persie, they looked vulnerable, and had van Persie controlled those passes better, he would've been through on goal. Interestingly, it is Arsenal's youngest outfield player, Aaron Ramsey, who attempted the most crosses from open play; perhaps because he is involuntarily remembering orders to send it to the big man from his days as a young footballer, or because of his inexperience. Hopefully, Arsenal will ditch the aimless crosses, or, at least, use a player who will provide natural width for these crosses, and better angles, such as Alex Oxlade-Chamberlain. Quick interchanges of passes, though, remains the best way to break down a tough opposition, making it odd that Arsene Wenger took Yossi Benayoun off, and also odd that Arsenal started crossing rather aimlessly. If Arsenal can fix these problems, frustrating afternoons like this one could become the exception for home games, rather than the rule.