Share All sharing options for: Arsenal 1-0 Everton: van Persie gets Arsenal on Song

Arsenal should've come away with an easy victory against Everton given the amount of chances that they had in the first half, but, as we've seen in recent years, were unable to take them. Everton changed their strategy in the second half and made it difficult for Arsenal, and were beginning to come into the game before Alex Song's wonderful pass lead to van Persie's, well, amazing volley.

Here are some tactical observations from last night.

David Moyes and other Premier League managers would've watched Arsenal's Champions League performance with interest. Instead of being the extremely attacking and passing side that they'd come to expect from Arsenal in Europe, teams have put Arsenal under pressure to disrupt their passing, resulting in less possession and fewer shots. Everton pressed in the midfield, and, to stay compact, played a high line.

The strategy worked, to a point. Through Marouane Fellaini and Phil Neville, Everton were able to disrupt Arsenal's midfield play, and Arsenal were forced to go longer. Aaron Ramsey, in particular, was more direct than usual, and for the first 15 minutes Arsenal found it difficult to play in the middle.

However, Theo Walcott and Gervinho began to make runs past their full backs, to exploit the space in behind Everton's backline. Walcott was caught offside twice before getting onto Mikel Arteta's pass through. Gervinho was also played through, as was Aaron Ramsey, by Alex Song. Everton's problem was that although they were playing a high line, their back 4 weren't pressing. When Arsenal got behind Fellaini and Neville, space opened up to play passes in behind, which is what happened when Arteta and Song played in Walcott and Ramsey.

Everton's defending, first half. A high line with no pressure from the back 4 meant that when Arsenal's creative players got behind Neville and Fellaini, they could play in behind.

After a first half where Everton found themselves lucky to be level, David Moyes changed his defensive strategy for the second half. While keeping pressure in the midfield, he didn't have his wingers press against Arsenal's makeshift fullbacks, and when Arsenal had the ball in midfield, Everton usually had 9 or 10 behind the ball. The removal of Louis Saha for Sylvain Distin gave Everton no true front player, with Fellaini and Cahill the most advanced midfielders. That made Everton more secure, defensively, but also helped them better retain the ball. Arsenal's defensive strategy this season has been to press only in their own half, and as a result, have defended much deeper. That means there's been an increased emphasis on counter attacks, but with teams still coming to the Emirates and defending deep, Arsenal have to retain the ability to break teams down through the middle, and with Aaron Ramsey, Mikel Arteta and Alex Song, they do.

Here, Everton have 10 men behind the ball. Cahill and Fellaini are deep, the wide players are between those two and Neville and Heitinga, and the full backs are narrow. It's the classic "defend against Arsenal" strategy.

With no fit fullbacks, Arsene Wenger was always going to play 4 centre backs. The question was whether Ignasi Miquel or Thomas Vermaelen would play out of position at left back, and it was the Belgian who started. While Vermaelen likes to make forward runs from centre back, at left back, he was more cautious. This meant Arsenal were usually outnumbered in attack, and Everton's wide players, especially Seamus Coleman who has played right back before, could double up on Arsenal's wide players. This resulted in Arsenal's left sided player, whether Gervinho or Theo Walcott, not being very effective, because they lacked an overlapping full back. With options restricted, Arsenal found it harder to break Everton down in the second half. Usually this season, it'll be a wide player who makes the definitive pass for an Arsenal player to score, but this time, it came from the middle. Alex Song has been given an increased role in attacking duties this season, and he showed his fantastic qualities again, with a wonderful ball for Robin van Persie. It was a pass reminiscent of Cesc Fabregas at his creative best, and a deserved goal for Arsenal. 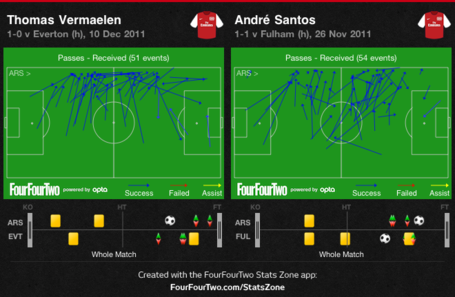 Thomas Vermaelen got forward less than Andre Santos did in the last home league game at the Emirates. This resulted in isolation for Arsenal's wide men, and Everton were able to double up on Gervinho and Theo Walcott.