Share All sharing options for: Thomas Vermaelen and Laurent Koscielny Show The Value Of Playing On Edge

For the first time this season, and possibly the first time since Arsenal beat Barcelona last year, Arsene Wenger had the luxury of picking from effectively all of his first choice players. Sure, Jack Wilshere and Kieran Gibbs would likely get into the side, but with Mikel Arteta and Andre Santos, Arsenal have very capable replacements. This allowed for Per Mertesacker to get rested, as Laurent Kosicleny and Thomas Vermaelen continued their burgeoning partnership that was interrupted by Koscielny's back injury and then Vermaelen's achilles problem. But as we saw in preseason and against Newcastle, these two are Arsenal's best centre back pairing when the emphasis is on winning the ball back quickly and squeezing space, as it was today against West Brom, a side that sat back and tried to play on the counter attack, as they did so well a year ago. In the end, West Brom held out for 20 minutes, before Theo Walcott got onto the end of Aaron Ramsey's superb throughball. The tactic of staying tight to Walcott, so effective in forcing him out wide, where he sometimes struggles, proved West Brom's downfall as Billy Jones got tight with no support, and, unsurprisingly, got blown past.

The performance of Thomas Vermaelen and Laurent Koscielny was crucial; by sitting tight to Simon Cox and aggressively winning the ball, they prevented West Brom from building any attacking play in the first half, where they failed to register a single shot. Vermaelen was impulsive in his desire to win the ball back quickly, seeing the concession of 3 fouls, but he also made 5 interceptions, getting Arsenal's attack restarted. Arsenal's pressing game has been missing in large parts this season, but, in the first half anyway, it was in full view and Koscielny and Vermaelen were the benefactors as the team defended from the front. When WBA did get past Arsenal's front line of defense, Vermaelen and Koscielny dealt well with the situation, eventually forcing WBA to start hitting long balls to Simon Cox down the left hand side, away from Vermscielny.

At home to weaker sides, this may be the preferred partnership, as not only do the two excel at winning the ball back, but they also are very good passers of the ball, allowing Arsenal to build from the back. In away matches, the positioning and calm of Per Mertesacker may be the way to go, coupled with either Koscielny or Vermaelen, but against weaker opposition at home, this looks like a promising partnership. 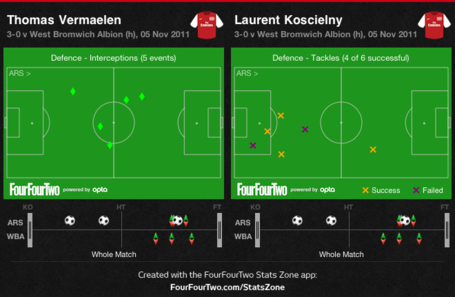 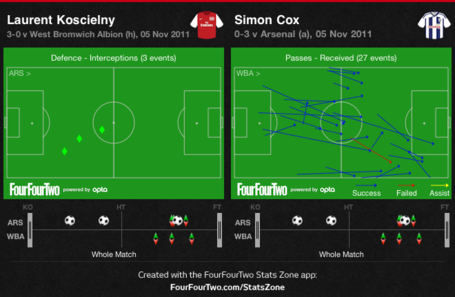 Koscielny and Vermaelen's success at winning the ball back quickly eventually forced West Brom to hit diagonals in an effort to get Simon Cox involved.

Mikel Arteta himself mentioned in the week how he was playing more conservatively, since joining Arsenal, waiting for the team to achieve solidity before joining in himself. While it has lessened his impact, it has not lessened his role, as the Spaniard has achieved over 90% passing so far, facilitating attacks from a deeper role, while also allowing Alex Song to get forward more. That has been a crucial part of Arsenal's attack, as many teams have failed to mark, or put pressure on Alex Song, figuring from his role and build that he would be unable to play devastating through balls. That, however, was a falsehood, as Song has contributed to many Arsenal goals, as he did to Thomas Vermaelen's yesterday, with his glorious chip over the top setting up Robin van Persie's volleyed assist.

As Arsenal's midfield begins to settle, however, Arteta can start to move further forward, especially as Ramsey and Song achieve a greater understanding with Arteta. That was in full evidence yesterday, as like Aaron Ramsey, Arteta is beginning to receive more passes in the final third. By doing that, it adds more options, and more fluidity for Arsenal, and can take some of the goal scoring reliability off of Robin van Persie. Arteta's goal yesterday showed off that fluidity; van Persie, receiving the ball in midfield, played passes with Rosicky, before teeing up Arteta who made a late run into the penalty area. The timing of the run was crucial; by making it as late as he did, Arteta prevented any marking from a West Brom player, making it easy to score. With Arsenal's midfield in this form, it's difficult to see how Jack Wilshere can come straight back into the side as a starting member. 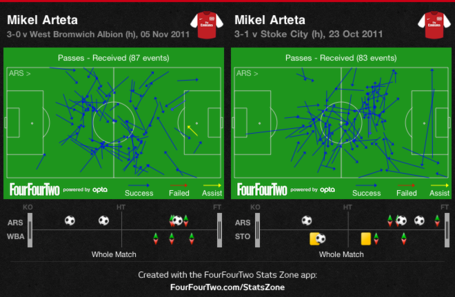 There are still some issues to iron out for this Arsenal side. The pressing, so good in the first half, was virtually non existent in the second period, and had West Brom shown more quality, they may have found a way back into the match. It emphasises a need for Arsenal to continue to press and to continue to play keep ball while winning, and not let the opposition back in. But with Ramsey, Arteta and Song flourishing, not to mention Robin van Persie (is it even necessary at this point?) and the burgeoning promise of Carl Jenkinson coupled with the strength of Koscielny and Vermaelen, Arsenal are looking far better on the 5th of November than anyone could've possibly thought. 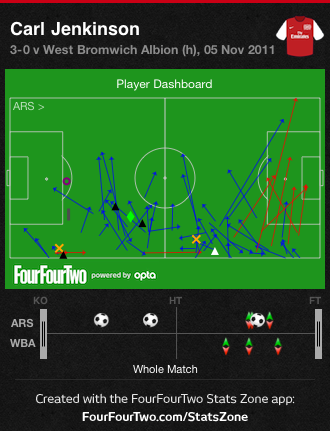 Carl Jenkinson's performance. Not only was the youngster strong defensively, with his habit of outmuscling wingers (he is, after all, also a centre back), but his crossing was outstandingly consistent, and he showed superb pace to support Theo Walcott.