Arsenal dropped 2 points but gained one point on Saturday afternoon, after Thomas Vermaelen's header made up for his own goal. Despite the come back, there was still some feeling that Arsenal should've done better. Fulham came with a good strategy to stop Arsenal playing. They sat deep when required to, with Clint Dempsey stopping Johan Djourou getting forward in the first half and then doubling up on Theo Walcott in the second. When they had to, they went long to Bobby Zamora and played from his knock downs, or they built through the midfield. They played well, but Arsenal should've had enough to beat them. However, they didn't, as they lacked creative spark until much needed changes after Fulham's goal.

The stage was set for Andrey Arshavin to show his worth. After Gervinho was rested, Arshavin had his chance to remind everyone that he isn't a backup player. He started brightly, almost creating a chance for Robin van Persie, before fading into obscurity. The problem that Arsenal had with Arshavin on the left, aside from the now annoyingly habitual give aways, is that Arshavin seems to no longer be able to beat defenders. While he did run past them in his earlier contributions, when taking defenders on, he's not nearly as successful as Theo Walcott or Gervinho. Whether it's a lack of pace or predictability, Arshavin seems to no longer be able to do it. Thus, when Fulham began to get deeper and deeper, Arsenal found it harder to break them down through the middle. Theo Walcott, who had beaten John Arne Riise with ease earlier on was double teamed on Martin Jol's instructions, restricting that route for Arsenal. Arshavin, though, wasn't double teamed, yet could not contribute. The difference when Gervinho came on was easy to see; he got in behind the Fuham defence, something Arshavin failed to do. 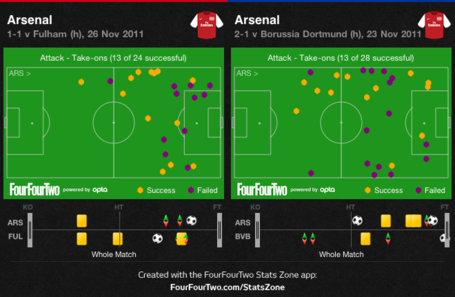 Arsenal won less take ons on the left hand side on Saturday compared to last Wednesday. On Wednesday, the combination of Gervinho and Alex Song saw a goal created for Robin van Persie, along with several chances, as the Ivorian had a strong game. On Saturday, Andrey Arshavin had a poor game, and didn't win any take ons.

As has their wont this season, Arsenal weren't terribly creative in middle areas on Saturday. Aaron Ramsey, tired by the amount of matches he's played this season in his return from a year's absence, was wayward in his passing, both in precision and speed. The Welshman's passing wasn't penetrative enough, as he completed only one pass into the Fulham penalty area, and completed 0 through balls. Neither Mikel Arteta nor Alex Song could, unlike in previous fixtures, provide extra creativity to make up for Ramsey, though Song did try to up the tempo by driving from midfield and trying to thread passes through the middle, to no avail. Arteta did have one excellent ball for Robin van Persie, when his shot was cleared by Chris Baird, but, otherwise, had his normal game, which was disappointing given the way he got forward in Arsenal's previous home league fixture. 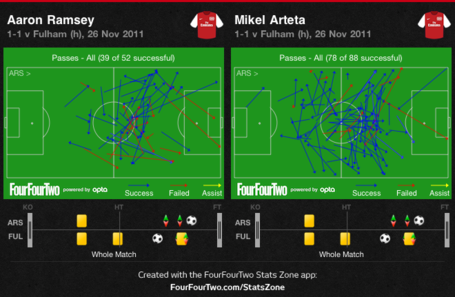 Arsenal's midfield two of Mikel Arteta and Aaron Ramsey weren't penetrative enough on Saturday. While Arteta spread play nicely, and had a quiet, if effective game, Ramsey's passing was poor, at 75%, and he wasn't able to make up for the poor ratio by playing a lot of through balls or long balls over the top for Robin van Persie or Theo Walcott. Alex Song tried to provide creativity, but Fulham successfully snuffed out that route.

You could see Arsenal's tiredness by the way they defended. Arsenal didn't press at all in Fulham's defensive third, and were slower to close down when Fulham had the ball in Arsenal's half. Usually this season, Arsenal are happy for other teams to have the ball in their own third, but will press when they get into Arsenal's half. However, Arsenal were clearly tired by their efforts last Wednesday, and with 9 of the 11 starting again, there were few fresh legs on the pitch, one being the excellent Johan Djourou, and the other the anonymous Andrey Arshavin. Hindsight is a wonderful thing, but it appears that Arsenal might've played better if tired players, like Aaron Ramsey, had been replaced by someone like Yossi Benayoun. Last season, Arsenal ran out of steam in March, following a Carling Cup run to the final and injuries hurting a small squad. Arsenal have a bigger squad this season; it would be a shame to run into the same problem because they didn't use it.