Arsenal Show Their Attacking Flexibility As They Down Canaries

Share All sharing options for: Arsenal Show Their Attacking Flexibility As They Down Canaries

It is not hard to envision that last season, and the season before that, and perhaps every season since the move to the Emirates Stadium and the end of the Robert Pires/Freddie Ljungberg/Thierry Henry/Dennis Bergkamp axis of attack, Arsenal would've lost to Norwich last season. The dependence on Cesc Fabregas, while beneficial when he was fit, lead to often to a narrow minded and narrow playing Arsenal side. How often did this site, and this author, bemoan the lack of wide play when the central route was blocked off during the latter part of last season? The loss of Cesc Fabregas, and to an extent, Samir Nasri, (while not particularly useful as the main central playmaker, the Frenchman preferred to come inside rather than staying out wide, and often his best work came from central areas) forced Arsenal to change their style. While Aaron Ramsey, Alex Song and Mikel Arteta give Arsenal enough creativity in the middle areas, Theo Walcott and Gervinho give Arsenal a greater threat in wide positions, resulting in Arsenal scoring more goals at this stage than last season. While his misses were notable, Gervinho was excellent in the first half, and created several good chances, as did Theo Walcott, whose understanding with Robin van Persie is almost telepathic at times.

Norwich's strategy in the first half was to cut Arsenal off playing in the middle, and force them to go out wide, to the extent that their fullbacks were also narrow, as well as the 3 in midfield. While they pressed in the midfield, trying to get tight to Ramsey, Arteta and Song and prevent them from dictating play, they left space out wide and didn't get tight to Gervinho and Theo Walcott. Norwich succeeded in cutting off Arsenal's play in the middle areas, leading to a poor amount of both number of passes and passing percentage as Arsenal tried, but failed, to play through the middle. However, by pressing and compressing the midfield, Norwich left too much space in wide areas, and allowed Theo Walcott and Gervinho to get into one on one situations, the result of which should've seen Arsenal go ahead before Steve Morison's goal. The wide areas continued to be profitable, however, and van Persie's goal was a combination of the front three, Gervinho getting away from the full back, before van Persie switched play to Theo Walcott, who again beat Marc Tierny. Earlier, chances had been created by Walcott and Gervinho's cutbacks, and also by Andre Santos's marauding runs, which were left untracked by Wes Hoolahan, creating a two on one situation. 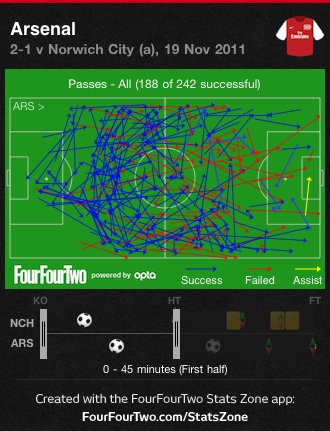 Norwich's pressing in the midfield saw Arsenal utilise wide areas to attack in the first half, where Norwich became stretched.

However, winning the midfield back was key for Arsenal in the second half, so they could exert more pressure on Norwich, and control the game more. Arsenal did this by pushing Aaron Ramsey up, 2-1 triangle, rather than a 1-2 triangle from the first half. Ramsey began to play between the lines, making it harder for Norwich to press in the midfield, and he was joined by Robin van Persie, who dropped deep several occasions. In recent weeks, van Persie had been playing more as a traditional #9, but today's performance shows his perfect understanding of the false 9 role. Not only did he drop deep to allow Ramsey and Gervinho to make runs beyond him (and both could've scored; Ramsey, if van Persie's pass was better in the first half, and if his flick had gone just inside the post, and Gervinho when Ruddy somehow saved his shot), but he also got into the penalty box to get onto the chances created by Walcott, Gervinho and Santos in the first half. By having van Persie drop deep and by pushing Ramsey up, Arsenal controlled possession more in the second half, and were able to play through the middle, leading to chances for Gervinho and a goal for van Persie. 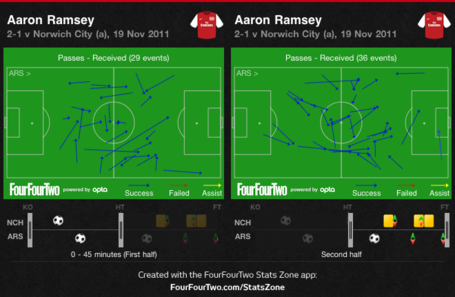 To try and regain the midfield, Arsenal pushed Aaron Ramsey further forward in the second half, and he began to play between the lines, resulting in... 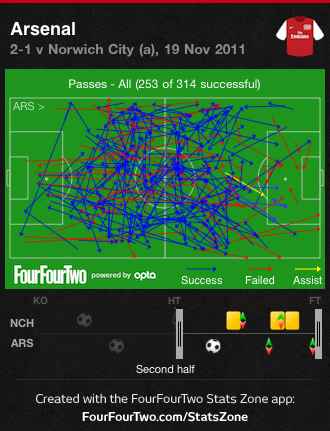 ...Arsenal taking control of the midfield battle, and being able to play more through the middle, while retaining a wide threat.

After the success of Arsenal's pressing game against West Brom, many expected them to continue with the more aggressive style of closing down. However, perhaps mindful of what happened when Arsenal played a high line against Chelsea, and with some probable tired legs in the squad after Internationals, Arsenal's defensive strategy was more akin to the second half defensive strategy against Chelsea. While they did play a high line, it wasn't extremely high, and Arsenal dropped off when Norwich's midfield had the ball. When their defence had the ball, however, Arsenal's front four did press, culminating in Arsenal's winner, after Russell Martin had stepped forward into midfield, and lost the ball.

A good performance from Arsenal that sees their winning streak extend to 5 games in a row in the Premier League. While the concession of Norwich's goal was unfortunate and lackadaisical from Per Mertesacker's point of view, it was a solid performance both offensively and defensively. Laurent Koscielny, drafted in as an emergency right back, had a good performance, while Thomas Vermaelen was again outstanding. It was the way that Arsenal attacked, however, that was most pleasing. Using the wide areas to get behind and around the Norwich defence is something that hasn't been done enough times over the past few years. With greater versatility in attack, Arsenal look more threatening than they have been towards the end of last season, and with the defence starting to give up less goals (15 scored, 6 conceded in this run), events are looking promising for Arsenal.