Arsenal to replace right back position with Golden Corral franchise

Share All sharing options for: Arsenal to replace right back position with Golden Corral franchise

Arsenal have revealed today a rather stunning tactical evolution of the 4-2-3-1 system that they have been using for the past couple of years, as manager Arsène Wenger stated that they have decided to replace the right back in their setup with a Golden Corral family-style buffet restaurant. "We have suffered with injuries to key players this year, and while Carl Jenkinson has tremendous, tremendous potential, we felt that a little bit more depth was necessary, and a buffet offers an outstanding tactical alternative for all types of matches," said the Frenchman, whom many credit with revolutionizing nutrition and lifestyle for footballers fifteen years ago in England.

The following diagram, thought to have been hastily cobbled together by Boro Primorac (why the different color text, for instance?), was passed around the press area at the Emirates: 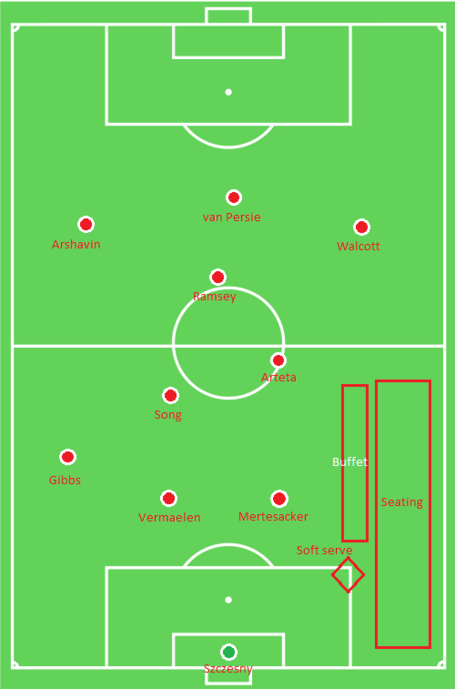 Wenger elaborated further when pressed about his new formation:

"We know, for example, that many players lose a little bit physically late in the half. A player like Song, for example, I cannot expect him to be as fresh in the 40th minute as in the first. But we know that he likes gravy in the wide areas, and this allows him to play more his natural game.

This move has the additional benefit of making life difficult for the opposition. Many players suffer when put under pressure by soft serve, for example. You think of a player like Bale or Cole, whom we know very well, these players have a natural tendency to fade a bit after too much roast turkey. And the name, we know very well also, Golden Corral, it is a strong name that suggests containment and defensive solidity, which maybe we lack little bit at the back this year.

This, of course, is in addition to the added revenue stream for the club. I know you like to give me a little bit stick for not signing new players all the time, but if I see a franchise of similar quality, I will not hesitate if it makes the team stronger."

The new formation will take some time to adjust to, no doubt; Golden Corral has historically struggled with its on-pitch temperature control, for example, and adapting from standard American-style fare to sausage rolls, chicken pies, and curry will not happen overnight. Still, it is a bold move for a club under its highest level of pressure since Wenger's arrival, and and this point, cover for Jenkinson, the club's only senior right back, is necessary. Many former players such as Lee Dixon and Martin Keown have hinted at Arsenal's lack of willingness to play their drinks fountain in a deeper position, so hopefully this is a step in the right direction.