A Word On Aaron Ramsey

Share All sharing options for: A Word On Aaron Ramsey

To be blunt, Aaron Ramsey had a shocker Sunday afternoon. Despite scoring a goal, he failed to get Arsenal's attack to click, and, despite finishing with an 83% pass completion rate, he made several shockingly bad passes in the midfield. Two of them, straight to Jermain Defoe and Gareth Bale, lead to direct Spurs chances. Another bad pass, a 5 yard ball that went straight out for a Spurs throw ended up with a Kyle Walker longshot. We all know what happened then.

Worse, though, was Ramsey's inability to support Robin van Persie, and to make penetrative passes through Tottenham's defence. While it is unfair to expect Ramsey to come straight in and replace Cesc Fabregas, there are several things that he's doing wrong that's affecting Arsenal's midfield play.

One of those things is his inability to support Robin van Persie. While Arsenal's formation has fluctuated between 4-2-3-1/4-1-2-3, both require midfield support for the forward striker, who then drops off and let's the midfielder run beyond, whether it's Robin van Persie or Marouane Chamakh. In 2009/10, when Arsenal played a 4-1-2-3, both Cesc Fabregas and Abou Diaby had excellent scoring seasons (this goal against Portsmouth, Diaby's second, is an excellent example), while in 2010/11, with Arsenal playing a 4-2-3-1, Arsenal's midfield was extremely fluid until the desperate end of the season saw them take on a more direct approach, leading to Robin van Persie becoming more of  a traditional #9, though he was still supported by Jack Wilshere, Cesc Fabregas, Samir Nasri and Theo Walcott.

This season, the support for van Persie has been lacking as Arsenal have gone for a more direct approach. That doesn't mean, however, that Ramsey shouldn't support van Persie, and the Dutchman and Arsene Wenger told him to do that against Bolton Wanderers at halftime. That resulted in a goal after a Ramsey run, and Arsenal played much better. Against Tottenham, though, Ramsey failed to support van Persie, leaving the new centurion isolated, with Walcott and Gervinho also lacking support, though the latter did come deeper to receive the ball. Compared with Cesc Fabregas, from last year's derby, the difference is striking: 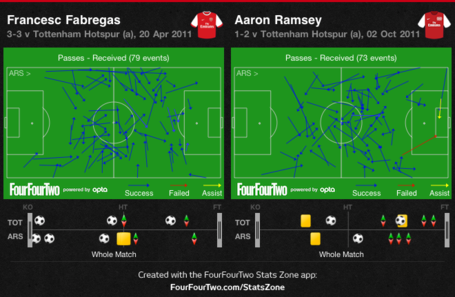 Fabregas received the ball in much more advanced midfield areas than Ramsey, and thus was better able to play through the lines and support Robin van Persie. That's not because of Fabregas being a superior passer or creator than Ramsey; that's down to Fabregas being able to understand and carry out Arsene Wenger's instructions, and Aaron Ramsey not being able to. Both like to control the midfield from deep, but unlike Ramsey, Fabregas pushed forward to support Robin van Persie and find space beyond pressure. Until Ramsey can do so, he shouldn't be starting as Arsenal's number 10 when someone like Yossi Benayoun or Andrey Arshavin, who do make runs behind the striker, is available. With Mikel Arteta able to play a deep role, Arsenal do not need another midfielder to control play from deep. Instead, they need a midfielder to make runs to break past pressure and support Robin van Persie, something that Aaron Ramsey, aside from 45 minutes against Bolton and Udinese, has been able to do this season.