Share All sharing options for: Chelsea 3-5 Arsenal: That Was Brilliant; Tactical Report

What on earth is going on with the top teams in the Premier League? It seems in a desire to replicate the success of Barcelona, this year's Champions League representatives have decided to play very attacking football with high lines. In the 4 matches between Arsenal, Chelsea, Manchester City and United, 29 goals have been scored in 4 games. Certainly there are some freak hammerings, but with Spurs also getting thrashed by the two Manchester clubs, it seems that everyone is designed on attacking more. That should please Arsene Wenger, and his 500th win is marked in a style that he loves: attacking football, where questions are asked later about defending. Both Chelsea and Arsenal lined up in a similar 4-1-2-3, though there were differences between the two. Juan Mata had the freedom to drift, with Ashley Cole pushing up, while John Obi Mikel played deeper than Alex Song, though Song dropped deeper in the second half.

Chelsea started off the better of the teams, and kept on threading passes past Arsenal's extraordinarily high line. The high line was exacerbated by Arsenal's lack of pressure on the Chelsea midfield, something that has been problematic for Arsenal all season. It could've cost them multiple times, as John Djourou pushed up to track Juan Mata, letting Cole go in behind, and Santos failed to track Daniel Sturridge.

However, by having Cole and Bosingwa push up, Chelsea let a lot of space in behind their full backs, which Walcott exploited twice in a couple of minutes, with Gervinho and van Persie failing to capitalise. Chelsea's high line, which Zonal Marking details here, also gave lots of space for throughballs from Aaron Ramsey and Mikel Arteta, but again van Persie was unable to control, before of course, Arsenal's first goal. Much like Arsenal, Chelsea's pressing was sporadic. When Ramsey receives the ball, John Obi Mikel isn't in his right position, having pushed out of position to try to tackle Gervinho. Thus, Ramsey has no one pressing in front of him, giving him time to thread a pass through. There were times when Chelsea did press, and pressed quite well (when, for example, Gervinho tried to thread one through for Ramsey. He was covered by two players, and it would've taken an extraordinary pass that likely even David Silva would fail at, to play in Ramsey). When they didn't press, though, it made it easier for Arsenal. Playing a high line isn't stupid, and Chelsea's high line wasn't at fault for all of the goals (neither was Arsenal's, though both were at fault for chances that could've been goals). Playing a high line without pressure, though, is hazardous at best and defensive suicide at worst.

Andre Santos' goal was also an odd one--Chelsea had 8 players on their left side of the pitch, leaving the entire left hand side free when Gervinho moved inside and Bosingwa tracks him. They were trying to squeeze the space, something that Barcelona have done quite effectively over the years. Doing that, though, requires excellent coordination and wide players tracking full backs, something that Daniel Sturridge didn't do, leaving the entire left open for Andre Santos. Arsenal's third goal was excellent individual play, while the fourth was an error from John Terry and the fifth an excellent counter attack after Chelsea committed men forward for a free kick. It was Chelsea's high line and their lack of defensive coordination that made them so vulnerable, with neither John Terry nor Branislav Ivanovic looking comfortable playing so high, something that Andre Villas Boas might have to fix personnel wise.

Chelsea's defending here-designed to squeeze space and win the ball back quickly, becomes undone when there's no pressure on Alex Song and when Daniel Sturridge fails to track Andre Santos.

Meanwhile, Arsenal defended better in the second half. They pressed more in midfield, winning more tackles in the middle, and the wide players, Theo Walcott and later Tomas Rosicky and Gervinho tracked their full back better, meaning that Mata and Sturridge got stuck in wide areas, making it harder for Chelsea to break Arsenal down. Alex Song also dropped deeper to give Arsenal security, as did Mikel Arteta, who not only won the ball back in key areas, but also had a 94% passing rate, helping Arsenal slow the tempo. While he isn't Cesc Fabregas, he is an excellent player in the midfield, giving Arsenal more defensive security in the middle (which has allowed Song to get forward more often), while also making quick and expansive passes from a deep-lying area.

Arsenal's play too, was interesting. Devoid of Cesc Fabregas and Samir Nasri, and with three forwards, they are more direct than previous incarnations. In previous meetings, Arsenal have generally dominated possession, but have been unable to break Chelsea down. Today, they had 48% of possession, and completed less, and a lower amount of passes than Chelsea. Their chances, though, especially in the second half, were more clear cut, and came mostly through balls over the top, or through Chelsea's backline, or, as on the 5th goal, the counter attack. Arsenal, though, still have the penetrative and tippy-tappy play from previous years, with their first goal a great example. They look a more well rounded team in attack, able to use direct wing play and cutbacks, along with a shorter approach. With now 20 goals in 10 games, they're starting to get back to their best. There are still some defensive issues to work out, but Arsene Wenger will be heartened by their performance in the second half.

Finally, a word on Aaron Ramsey. After his goal against Marseille, he has improved greatly, threading some fantastic passes for Arsenal (Cesc-ual passes, one may say [I'm not sorry]). While his passing has become more ambitious, rather than just holding the ball and going square and backwards, he has also made better runs in support of Robin van Persie, and was unlucky not to score. If he can continue to make those passes and runs, he can go a long way to replacing the creativity and goalscoring potential of not only Cesc Fabregas, but also Jack Wilshere, until, at least, the latter returns. 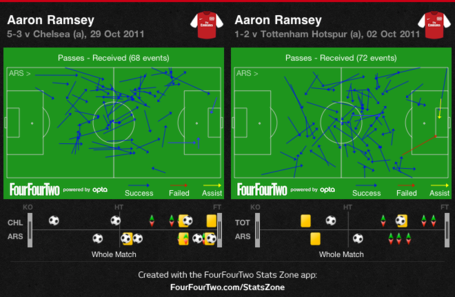