A strong defensive performance coupled with a late smash and grab winner gave Arsenal a strong foundation to progress to the next round of the Champions League. This writer doesn't usually give Arsene Wenger credit for preparing for other teams tactics, but for once Arsene Wenger got his tactical decisions spot on, and it was a fairly comfortable 0-0 performance until Ramsey's late goal.

Both sides went for a fairly similar 4-1-2-3 formation, with Lucho Gonzalez and Tomas Rosicky with the playmaking duties. Marseille, though, were a lot more direct than Arsenal, using the wide areas and the threat of the counter attack, a tactic that saw them put 3 past Borussia Dortmund.

Perhaps having watched Arsenal's struggles away at Dortmund, Didier Deschamps had his side heavily press Arsenal early on, especially in the first 15 minutes, and they won 6 out of their 23 interceptions in that period. They also forced Arsenal to go more direct, and play less in midfield; Tomas Rosicky and Mikel Arteta were manmarked, making it hard for them to do much except to pass backwards and square. Much like Aaron Ramsey two weeks ago, Andre Santos had a hard time dealing with the pressure, and while he ended up with a good passing percentage, it was where his bad passes were made that put Arsenal under pressure. 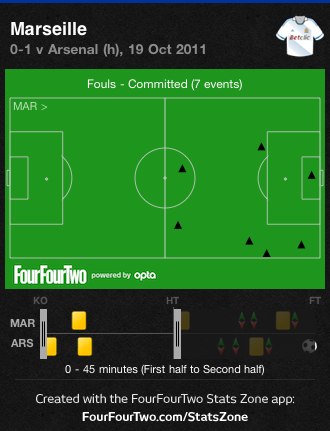 Marseille's early pressing saw them commit all of their fouls in Arsenal's half, especially in the left full back area.

Arsene Wenger's response to this pressure was to have his whole team drop back. Rather than the front three staying up the pitch and open up the gap between the midfield and attack, the whole team shifted back in a compact unit, much like they did against Barcelona last February. Effectively playing 10 men behind the ball, Arsenal made it hard for Marseille to break them down, making the French side resort to aimless crosses into the box, where Laurent Koscielny and Per Mertesacker had a strong game. When Arsenal got the ball, they maintained possession, trying to force Marseille to chase after the ball and lose energy, making it easier for Arsenal to build. Eventually they did that, leading to Arsenal's gradual dominance of the second period of the first 45. 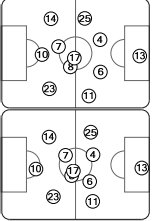 Arsenal's average positioning in the 1-15 minute, top, and 16-30, bottom. While the increase forward is marginal in the graph, bear in mind that it takes the average position of every player, so a push forward is significant enough. 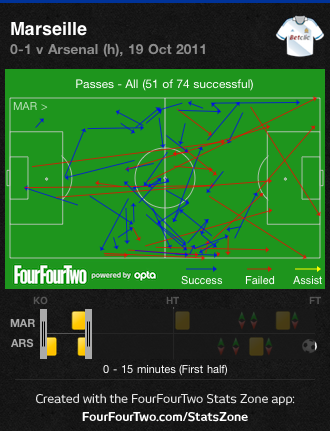 Despite having more possession and looking more threatening, Marseille were unable to get past Arsenal's solid defensive block of 10 men, and ended up aimlessly crossing the ball into the box, and being more direct in general.

After the early pressure from Marseille, Arsenal began to dominate. Tired out by their early efforts, the Marseille players were unable to effectively press, letting Arsenal build from the back and giving their midfield time on the ball. Alex Song especially was left unmarked, and while he didn't pull off every through ball (completing only 22% of through balls), he did lead the team in through balls, and was a significant threat. In the second period, Marseille sat deeper, making Song and Rosicky's ability to thread through balls more important, and the latter almost assisted for the quiet Theo Walcott. The substitution of Gervinho for Walcott gave Arsenal more skill on the ball and more ideas against a deeper side, while Aaron Ramsey came on to settle the midfield after Andrey Arshavin had started to give the ball away. Arsenal's passing in the second half was much more constructive and penetrative than in the first, because of Marseille's negative approach. They got their just rewards when Aaron Ramsey did something not many expected of him, and made a forward run into the box. This has been lacking in Ramsey's game so far this season, and has been a factor to his lack of goals until the last two weeks. 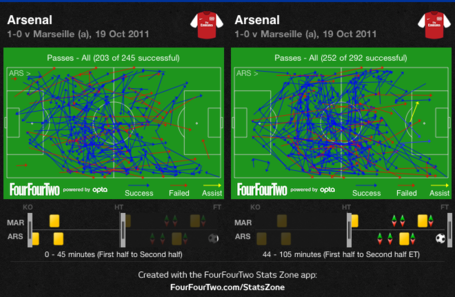 Arsene Wenger won this match. As Marseille put Arsenal under extremely heavy pressure in the first quarter of the game, he had his side drop deeper, making it harder for Marseille to break down Arsenal, and also making it easier for Arsenal to pass away from pressure, making Marseille chase. After they tired, Arsenal began to dominate, and all three changes, but Ramsey and Gervinho in particular, were instrumental in getting Arsenal the win after they had looked to run out of ideas.