Should Arsenal Play With A Back Three?

Share All sharing options for: Should Arsenal Play With A Back Three?

After a decade where 3 man defences were a novelty, and usually the realm of an extremely reactive side, playing a back 3 is making a return, most notably in Italy where two sides, Napoli and Udinese used the natural width that a back 3 provides and the defensive strength to seal Champions League places. Marcelo Bielsa's Chile also used it fairly successfully in the 2010 World Cup, before going out in the round of 16 to Brazil.

With Bacary Sagna out, Arsenal have lost perhaps the best right back in the league, and are forced to play someone there who is inexperienced (Carl Jenkinson), or inexperienced and uncomfortable at right back (Laurent Koscielny, Francis Coquelin, Johan Djourou or Andre Santos {yes, really!}).

With Thomas Vermaelen's expected return in the near future, Arsenal have 3 quality centre backs to choose from. While rotation is not a bad thing, and is perhaps necessary with Vermaelen having been out for effectively, 14 months, playing a back 3 may be a solution to Arsenal's right back conundrum. The difficulty is getting the balance right; it is hard for teams to switch to back 3 from a back 4, let a lone completely changing the style of play. Because of that, the rest of the team would have to be able to maintain the possession based game that Arsenal play, ruling out a Napoli or Udinese style system where wing backs run up and down the pitch.

The answer then, is to look at how Bielsa set up his Chile to play. With pressing and a short but direct passing style, Chile's style of play is more similar to Arsenal's than Udinese and Napoli. Indeed, Bielsa seems almost the perfect candidate to replace Arsene Wenger when/if he goes in the next few years; he rarely deviates from his favoured 1 playmaker and 3 forwards (un egache y tres punta), and likes his teams to play in a short but direct passing style with heavy pressing, a trait that he is trying to bring to Athletic Bilbao (off topic: they're awesome. They only play players who are Basque or of Basque descent).

As Zonal Marking discusses in this excellent piece, Chile played in a 3-3-1-3, with usually a wide midfielder or wing back one on flank, with a more rounded midfield player on the other. The important aspect about Bielsa's system here is movement; the wing backs push forward to create overlaps, or allow the wingers to get into central areas created by the movement of the front man. With lots of pressing, the back three are often in midfield areas, leading to players like Arturo Vidal for Chile and Javi Martinez for Bilbao, both holding players, to be deployed as centre backs. With the wing backs playing in a sort of midfield diamond, they can also add support in the centre of the park, assisting the playmaker in case he gets stifled.

So, how can Arsenal implement the 3-3-1-3, and would it work? The first question is the key part; if Arsenal don't have the players required to play in a 3-3-1-3, then it isn't worth going through the square pegs in round hole approach. Luckily, the system is quite flexible, meaning that someone like Alex Song could play as a wing back and attack through the middle, or have Andre Santos attack with width. 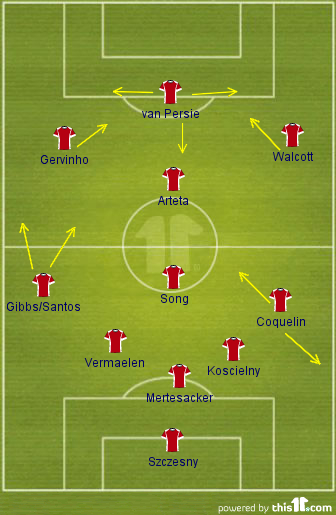 The attacking four remain the same and have about the same roles as they have now; Theo Walcott and Gervinho are inside forwards, or the modern day poacher, playing on the shoulder of right and left backs and making diagonal runs to take up space that Robin van Persie creates with either deep or lateral movement. Alex Song is the holding midfielder, while Kieran Gibbs or Andre Santos are both comfortable as a wing back and thus aren't played out of place. Per Mertesacker plays as the sweeper, a role that can take advantage of his superb positioning and less than superb speed. The problem here, though, is who plays on the right. Without Bacary Sagna and with Carl Jenkinson being less technical than his fellow defenders, the role falls to a midfield player. That player would also have to have defensive capabilities; after all, it is a defensive position, even if it does have a very attacking role. With that being said, Francis Coquelin seems like the player for the role; technically, he's stronger than Emmanuel Frimpong, and also has better positional instincts. While Coquelin is uncomfortable on the right (according to Arsene Wenger), he can play narrow enough that it doesn't become an issue, shifting out wide to deal with opposition threats.

Lastly, would it work? One key component of Bielsa's system is that he likes to play one more centre back than opposition centre forward; 3 v 2 or 2 v 1. With a majority of Premier League and European teams shifting to one up front (to the chagrin of Taylor Twellman)--even more so against Arsenal, that means that Arsenal would either have a somewhat useless extra defender, creating a shortfall elsewhere on the pitch, particularly in midfield. The obvious response would be to play Arsenal's usual 4-2-1-3, which would return us to the original problem: how to replace Bacary Sagna. A further problem would be the lack of personnel in midfield; if Arsenal are under the kosh, they will lose the midfield battle because there's only 2 spread out midfielders, rather than 3 more bunched together. Finally, the system requires very heavy pressure, something that Arsenal have been unable or unwilling to do this season. Even more so than their current system, playing with advanced wing backs and lesser numbers in the midfield would subject them to counter attacks and balls through the middle if they don't press.

For those reasons, perhaps it isn't best that Arsenal switch mid-season. Instead, Arsenal should focus on improving their own play with their current system, and ensure that cover is given to whoever is playing right back. More than ever, Arsenal must defend as a team.