A thrilling first half gave way to a less than spectacular second as Manchester City got the point they were looking for. Not a very interesting tactical matchup, but two things did stand out over the course of the 90 minutes. Arsenal played the same team that beat Birmingham and Chelsea, while Jo, Zabaletta, Milner and Toure came in for City. 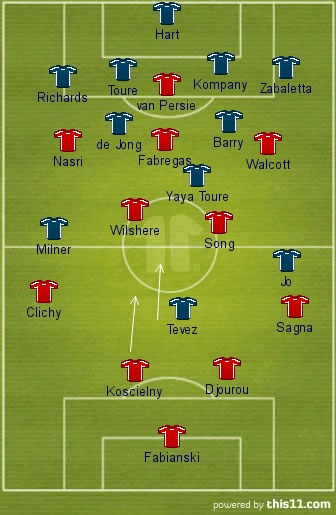 Arsenal started off at a blinding pace, and City couldn't settle. The movement and fluidity was fantastic from Arsenal, and van Persie's role was key. He drops off more than most strikers do, a role known as a false nine. Briefly, this means that the striker takes up the centre forward role, but he drops deep and opens up space for other attacking players; in this case, Fabregas, Walcott, Nasri and Wilshere. They should've taken the lead, but unluckily did not do so.

One interesting, and surprising element was Arsenal's lack of pressing. Against Chelsea they pressed high up the pitch, but not so tonight. Fabregas and van Persie dropped back (I think around 7 min there's a perfect example with City passing in defence), and instead Arsenal won the ball back in midfield. Whether that suited Arsenal better because of how high Song and Wilshere play, and considering how deep City's midfield play, it was an interesting tactical decision. In the end it didn't make a huge difference, as City rarely went forward, and Arsenal won the ball back in the midfield, as the following chalkboard shows:

City's attacking play was very limited, and they did miss David Silva. In the absence of Silva, it was left to Yaya Toure to break forward from midfield, and the one time he did it took a crucial interception from Johan Djourou to prevent City from getting a great chance. The idea for City was for Toure's powerful runs to fill the space that Tevez's movement, and Koscielny's following of Tevez, created. However, with Toure being a predominantly defensive minded midfielder, and with City under lots of pressure, he rarely got forward, and in the end, City were left to hitting long balls for Tevez and Jo to chase. That may have been the only reason for Jo to be in the squad: Mancini couldn't drop Tevez, but perhaps knowing City would need an out ball, he played Jo, and at 6'2, he offered height that Tevez doesn't, and a majority of Joe Hart's passes went to him.

By the end of Arsenal's opening 15 minute blitz, the match settled into a predictable pattern, with Arsenal attacking and City defending in numbers, deep and narrow. One way to break down a team is to play with width, which is something Arsenal did to great effect in the the return fixture back in October. Arsenal don't have the greatest target men in the first eleven, but playing crosses on the ground could still have worked, and it's interesting to note that one of Arsenal's best chances, Fabregas's post hitting shot, came after a pass from Nasri cutting in from the flank. Without width, City found it easy to sit 7 players back and prevent Arsenal from building through the middle, and, during the second half, Arsenal were mainly restricted to long shots. The one time City did look stretched was when Song joined the attack and gave Arsenal an extra body; his decision to pass instead of shoot was surprising given his goal record this year.

The above chalkboard shows the percentage of passes made in zones; more were made in wide zones in the return fixture, and Arsenal were able to break City down.

In the end, Arsenal were unlucky not to score after their opening 15 minutes, but once the game settled into the pattern it did, they should've used the width more to their advantage. Nasri on the left wasn't as effective as he has been in recent weeks, possibly because he couldn't make the diagonal runs that he did against Fulham, and possibly because of a knock he received. Nicklas Bendtner and Andrey Arshavin were ineffectual as subsitutes, and perhaps with the introduction of Bendtner, Arsenal should've gone 4-4-2 and gotten Bendtner's height into the box rather than on the wing. City did defend very well, and will be happy with their point, but it was an extremely negative performance, and one wonders that if City don't win the league, will Mancini be replaced by a more adventurous manager?