Why Isn't Song on Song?

Share All sharing options for: Why Isn't Song on Song?

Alex Song may have the most important role out of the regular starting eleven. Last year, he had an outstanding year, winning tackles, making interceptions, and playing simple passes to Cesc Fabregas or one of the other midfielders to transition Arsenal from defence to attack. This year, a changed role has seen him score a career high in goals, but also lose some of his effectiveness in screening the back four, and has been a major target for criticism as Arsenal have recently conceded more.

Where did it all go wrong for Alex Song, and why?

First, let's look at the background to Song's role, which depends so much on how the midfield is set up. Last season, Arsenal played a 4-3-3, with the midfield structured as a '1-2', with Song holding for Fabregas and one other to go forward and join the attack. Because Song had greater defensive responsibility, he didn't push forward as much as he does now, and was, perhaps after Cesc Fabregas Arsenal's most important player (he was the biggest loss for the second leg against Barcelona), and certainly the most improved. Even as Arsenal's midfield switched from a 1-2 to a 2-1, as Arsene Wenger tried to prevent being caught on the counter attack after defeats against Manchester United and Chelsea, Song stayed deep, with Abou Diaby or Aaron Ramsey, playing alongside him, making late runs forward.

This year, the midfield three were kept as a 2-1, with, ideally, a creator (Cesc Fabregas), a destroyer/holder (Alex Song) and a passer (Jack Wilshere or Denilson). However, Wenger usually likes to have a powerful and physical midfielder, such as Abou Diaby, and his continued deployment despite not being one of Arsenal's best midfielders certainly backs up this theory. Not only does a physical midfielder add some needed steel in a somewhat light-weight Arsenal midfield, the powerful running through while dribbling style of Diaby helps break down teams that park the bus. With Diaby out and in order to foil teams sitting back, Wenger has intentionally pushed Song forward, saying

"The teams close us down so much high up because they know we play through the middle," said the manager. "I push my midfielders a bit up at the start to give us more room to build up the game.

"When you come to the ball we are always under pressure, so Song is a bit naturally high up because I want him high up

While this policy has resulted in more goals from Song, it has also lead to a noticeable decline in his defensive contributions, leaving Arsenal's backline exposed.

When Does It Work

Song has had some excellent performances this season; man of the match and matchwinner against West Ham, and he had good games against Bolton and Newcastle (where he completed more passes than Fabregas) as well. The common theme from those two matches is that both teams played a 4-4-2 designed to frustrate Arsenal's midfield by sitting deep, but denying the midfield space. With no direct opponent, Song was given a free role, and he took advantage, especially in the West Ham match, where Fabregas was essentially marked out of the game, Song's free role meant he provided most of the attacking play from the midfield and scored the winning goal. 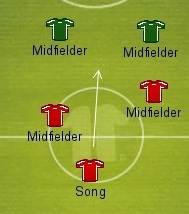 When It Doesn't Work

However, it hasn't all been good for Song this season, and he's coming off his two worst performances in the Premier League. Against Manchester United, he was poor passing the ball (granted, most of the team was), but more importantly, he only won 1 tackle, and it was an offensive take-on rather than a defensive challenge. Against Fulham, he again gave the ball away in dangerous positions; he won more tackles in this match, but it was still overall a poor performance. Again, there is a common theme here: Fulham, playing a 4-4-1-1, and Manchester United, playing a 4-3-3, had direct opponents for Song, meaning that when he pushed forward, he left a midfielder exposed and also found less space to pass and generally play in.

One further thing to remark upon is that when Alex Song is partnered with Jack Wilshere, he is partnered with a midfielder who isn't the strongest defensively and likes to get forward. When he is partnered with Denilson, he's partnered with a midfielder who is positionally disciplined, and although he may be slow, he's also a good holding player, who's discipline allows Song to move forward without leaving the back completely exposed. That leaves a couple of conclusions: Song can push forward without leaving the defence exposed if the opponent is playing a deep 4-4-2, or if he Song is partnered with Denilson. If he is partnered with Wilshere or if Arsenal is playing against a 4-3-3 or a variant of a five man midfield, Song's role should be reined in, otherwise his position indiscipline will lead to the defence having to play a high line and will lead to conceding more goals like the goals conceded against Fulham and Tottenham. A shift in Alex Song's role to make him more defensively responsible can see Arsenal's defence become much stronger, which could be the difference between winning the league and not winning the league.