Manchester United defeated Arsenal today at Old Trafford by a score of 1-0 in a match that was mostly terrible from both sides.

Since Arsenal weren't at their best today, not using their tools to the best of their abilities, it seemed only right that your humble blogger servant would do similarly in a show of solidarity.  I have thus elected to use Microsoft PowerPoint, which if used incorrectly, ends up looking more or less like Arsenal did today: bad.  Presentation after the jump.

[Steps up to front of conference room]

Thank you, everyone, for asking me here today.  I don't want to take up too much of anyone's time, so I'll just dive right in...[clears throat]: 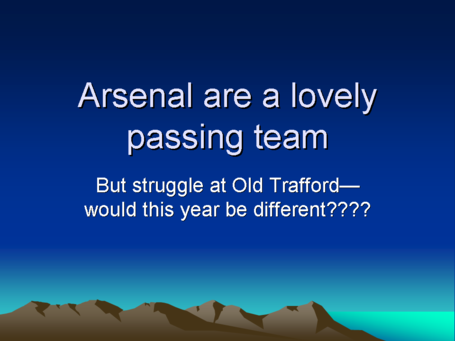 So, everybody, as you can see from this first slide, Arsenal are known for being a lovely passing team.  However, in the past, they have not done well at Old Trafford.  Would today be any diff--could someone get the lights?  Thanks, Jim--would today be any different?  Hold your questions until the end, please; we'll have plenty of time... 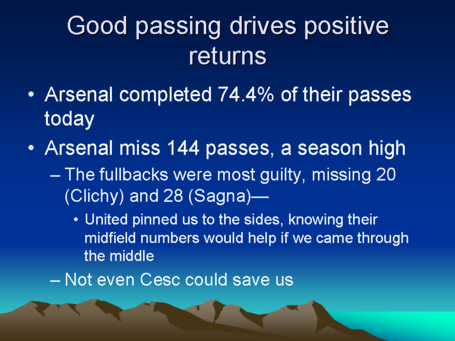 As you can see, in general, when Arsenal passes well--above, say, 80%, they derive success from that kind of, um, that kind of work, that passing work.  Arsenal, well, it's up there--they only completed 74.4% today, and missed 144 passes, which is, well, it's not good.  Manchester United knew that Arsenal presented a threat playing from the outside in, and took every opportunity to close down the flanks, resulting in some bad numbers from Gael Clichy and Bacary Sagna...

Normally, now, normally, of course, this type of situation calls for the introduction of a central playmaker, but for a number of factors that we have to wait for more analysis on from the guys on 16, today even Cesc Fabregas didn't make a difference.  Early reports suggest that his hammy may have had something to do with it, but that's not my...[turns off ringing cell phone]...sorry.  That's not my area, as I was saying. 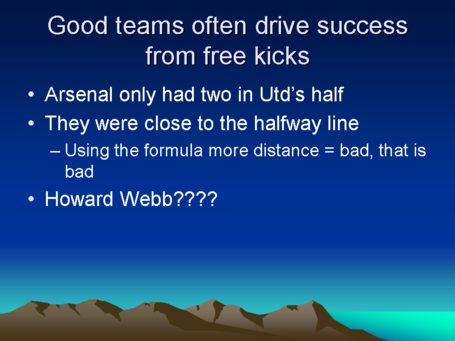 One area where we've really tried to step up production this year is from free kicks and corners...we had a few corners today, but no free kicks of note.  Part of this may be some missed calls from Howard Webb, but the fact remains that we haven't been able to make significant gains against our competitors from this area as we'd forecasted.  Our analysis also shows that free kicks from a long distance tend to be less effective; teams kicking from the edge of the box, returns-wise, why, they're mopping the floor with our numbers at the moment.  We'll have to step up production in that sector. 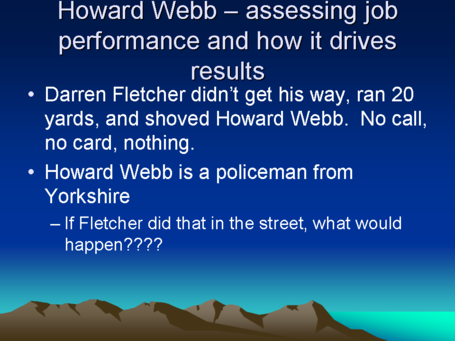 And lastly, guys, one at a time, please, guys, I just wanted to put in a quick--guys!  we're almost done, don't worry.  I just wanted to put in a quick word about today's referee.  I know what most of you think of him, giving three yellow cards, all that, but actually he wasn't terrible today aside from a few, well, okay, he wasn't great.  And with that, I think I'll hand it over to--yes, Bob, he did miss Rio Ferdinand scraping Sagna's chest with his studs while in mid-air.  Thanks for your time, guys; I'll turn it over to questions now.